Borrowers obtained a loan to purchase real property in North Carolina through Professional Lending. Tritle was the President of Professional Lending. Borrowers brought suit against Tritle and other defendants. Among other claims, the borrowers alleged that their loan closing was part of an undisclosed hidden illegal scheme to issue unregulated securities based upon the negotiation of non-negotiable notes, the terms of which had been changed after the execution by the borrowers. They alleged that defendant Tritle “accepted charges for the rendering of real estate services which were in fact charges for other than services actually performed” in violation of RESPA Section 2607(b), which prohibits any person from giving or accepting unearned fees. The court determined that the borrower's complaint failed to identify which settlement charges were allegedly improper and that it lacked factual allegations that defendant Tritle improperly split a fee with any other persons. The court held the borrower’s generic allegations regarding the settlement charges were insufficient to effectively state a RESPA claim and ruled to dismiss with prejudice the borrowers' RESPA claims against Tritle.

Borrower’s contentions did not contain any factual allegations to support a RESPA claim based on alleged windfall.

Lakeview Loan Servicing, LLC (Lakeview) filed a complaint requesting that the court declare its senior title to certain real property, cancel and remove a satisfied security deed from title to the property, judicially foreclose Lakeview’s senior interest in the property based on the borrower’s breach of the note and security deed, award sole possession of the property to Lakeview, and award damages against the borrower for the amount due on the note and security deed. The borrower counterclaimed, alleging that Lakeview violated RESPA because “alleged payments between Lakeview and an unidentified entity were misleading and designed to create a windfall”, contending that Lakeview’s actions were “deceptive, fraudulent and self-serving.” Additionally, the borrower stated that Lakeview failed to provide “full disclosure” of all matters related to his mortgage loan.1  Lakeview argued that borrower failed to allege any facts that support his conclusory statements.

No RESPA statutes or regulations were retrieved.

1 The details of the transaction(s) between Lakeview and the borrower are not set out in the court’s opinion. 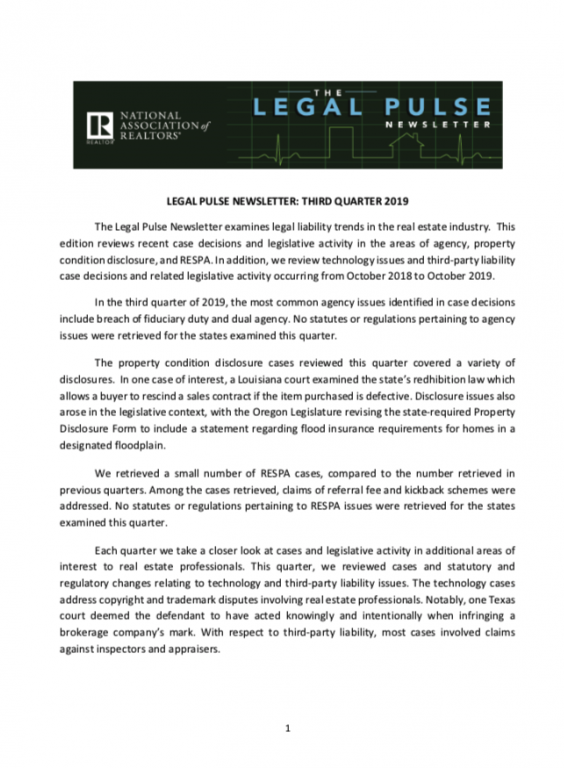