The homeowners alleged the addition to the loan modification was a deception and misrepresentation, and that the increased payment was a kickback to the mortgage company based on the inflated foreclosure balance. In considering the homeowners’ RESPA claims, the

Court refused to certify class action based on allegations that mortgage company’s requirement that homeowners use an affiliated appraisal company.

court found that because their allegations did not involve the sale of any property or the requirement that title insurance be purchased from a particular title company, RESPA does not apply. Additionally, even if the homeowners had properly alleged a RESPA claim, such claims would likely be time-barred. The trial court dismissed the RESPA claim.

In an attempt to certify their action as a class action, the homeowners argued that the mortgage company generally required its customers to use the same appraisal management company. The homeowners further claimed that the mortgage company and appraisal management company were affiliates and owned by the same trusts and that the owners of each respective company received profit distributions, which amounted to a kickback violation. The court declined homeowner’s request to certify two classes. The first class would have been

Completing a substantial amount of business with a single escrow company does not result in a RESPA violation absent the exchange of any fee, kickback, or thing of value.

composed of the homeowners who did not receive any notice of the affiliated business relationship between the mortgage company and appraisal company. The second class would have been composed of those homeowners who received a disclosure about the affiliated business relationship. Given the depth of the individualized inquiries involved in determining each homeowners’ situation, the court denied the homeowners’ motion for class certification.

The homeowners, after receiving a loan backed by a deed of trust on their home, brought suit claiming, in part, that the broker, lender, and escrow agent violated RESPA’s prohibition on steering borrowers to an escrow company of the mortgage company’s choice. The homeowner’s claims were based on the substantial amount of business referred to the escrow company from the mortgage company.

The court found that that the homeowners appeared to conflate “thing of value” with the implicit allegation that the escrow company agreed to act as the escrow agent. The court disagreed, noting that simply doing “a substantial amount of business” with a certain escrow company does not result in a violation of RESPA, as no fee, kickback, or “thing of value” was exchanged. The trial court dismissed the RESPA claim.

RESPA issues were identified 9 times in 6 cases (see Tables 1, 2). No RESPA legislation was retrieved this quarter. 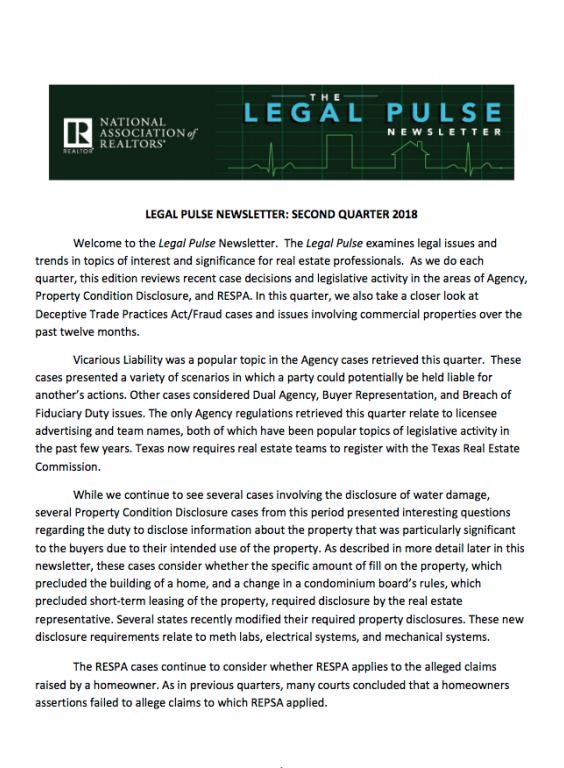