Churches turned into art centers, factories into microbrew pubs, and shopping malls into medical facilities are just a few examples of adaptive reuse, the term used to describe the repurposing and transformation of an existing structure. While adaptive reuse is not new, changing business and social factors are driving renewed interest. These factors include a hybrid workforce, supply chain disruptions, increased interest in green construction and a lack of affordable housing. The result: more opportunities for commercial real estate brokers to think differently about the highest and best use of a property. 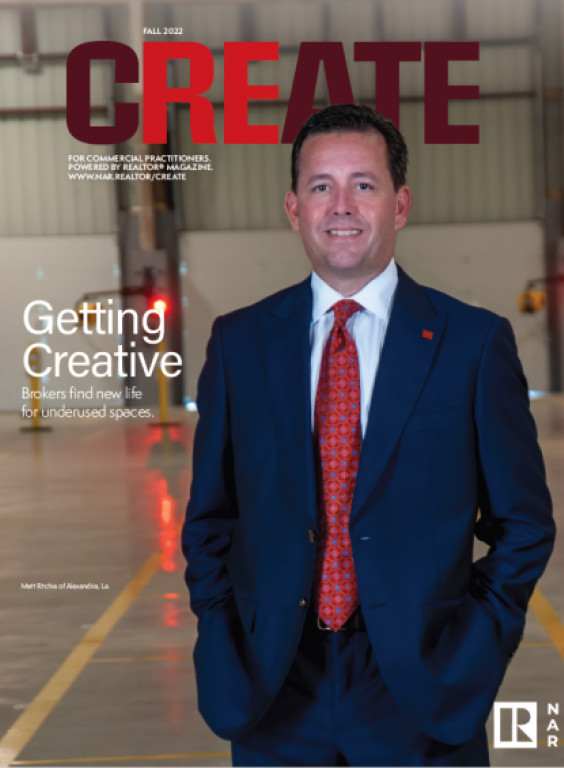 Housing shortages are making conversion to residential use the most popular type of change. Rent Cafe reported that 2021 was the most successful year for apartment conversions, with more than 20,000 units coming online and an additional 52,700 units expected to become available in 2022, many created from former office buildings and hotels. However, opportunities for adaptive reuse projects aren’t limited to residential. Existing commercial structures are finding new life as health care facilities, logistics warehouses and mixed-use suburban centers.

“Adaptive reuse projects have evolved to a point where they should be considered an asset class of their own,” says K.C. Conway, principal of Red Shoe Economics and chief economist for the CCIM Institute. “A variety of new projects have surfaced in secondary and tertiary markets, where investors see adaptive reuse as a driver of net operating income and yield.”

Adaptive reuse projects have evolved to a point where they should be considered an asset class of their own."

Role of the Broker

Listing properties for adaptive reuse requires envisioning the possibilities and selling that vision to a prospective investor or developer. But the broker’s role doesn’t stop there. Brokers often determine the feasibility of adaptive reuse. For example, they may work with local government officials on zoning and infrastructure issues, secure permits, engage with an economic development group to secure funding, promote the project to the community and more. There are potential pitfalls for brokers who fail to anticipate and plan for these steps or, at the very least, fail to bring together the players responsible for each element of a successful adaptive reuse project.

Meet four commercial brokers who successfully turned underperforming assets (in one case, a gigantic white elephant) into lucrative sales that benefitted their bottom line and the local community.

From Rodeo Arena to Distribution Center

You’re not alone if central Louisiana doesn’t jump to mind when you think of rodeos. But in the late 1990s, a developer tried to make it happen, pouring $11 million into a 64,000-square-foot indoor rodeo arena. The arena hosted one event, in 2000, before going belly up. Afterward, the venue sat unused for 17 years through four owners until Matt Ritchie, CCIM, president of Ritchie Real Estate, walked in. “I took one look at that clear span metal building with its 45-foot-high ceilings and thought, this is perfect for industrial.”

Ritchie’s vision was so clear that he and a partner purchased the Boyce, La., building and surrounding 26 acres of land to develop it for leasing as a logistics or distribution center site. “No one was biting, so I pitched other uses,” says Ritchie—among them, a hurricane overflow center and a potential pandemic field hospital.

In 2021, Lowe’s Home Improvement expressed interest. Ritchie negotiated a long-term lease, agreeing to develop the property for a distribution warehouse within six months. “The building contained only dirt floors and bleachers,” says Ritchie. “We donated the bleachers to a local school and brought in tons of dirt to raise the floor to accommodate truck docks. Trucks also meant upgrading the off-highway roads to heavy-haul standards.”

As part of an upgrade to the water supply system, a 50,000-gallon tank was added to the existing water supply, requiring a larger pump. “It came down to the wire,” says Ritchie. The pump was sitting in a Georgia port awaiting transport. With just three days left before Lowe’s was to take possession, Ritchie sent someone to pick it up rather than risk missing the deadline. “This project took two years off my life,” says Ritchie, “but we got it done—working seven days a week for six months.”

Despite strong local support for the project and extensive lobbying, Ritchie was unable to secure funding from the state’s economic development agency. “We could have used that money, as the project came in about 30% higher than I’d priced it,” says Ritchie. “I view it as a loss leader. Lowe’s took the building and six acres. We still have land and the heavy-haul road to support other trucking operations, and I’ve already had one inquiry.”

Reflecting on the project, Ritchie says he should have hired a broker to negotiate on his behalf. “Self-representation saves you on the front end but could cost dearly on the back end of the deal,” he says. “In this instance, I believe I negotiated the best available deal, but I will never know.” He recommends involving a business or real estate attorney at every step. “Many small brokers don’t want that expense, but in the grand scheme, it’s worth it.” He also recommends including escalation clauses in the contract. “In this environment of inflation, supply chain and labor shortage issues, I would never agree to a lease rate without escalation clauses if the cost of construction increases.”

Next up: In December, Ritchie expects to start leasing up an 88-unit facility that he and a partner converted from a motel to a senior residential facility. Not every hotel-to-residential conversion works, he says, but the property was in a unique location—close to a hospital and restaurants, and perfect for the 55-and-over crowd.

And senior housing isn’t the only option for hotel conversions.

Webb, a principal with Commercial America Properties, recently sold a 120-room Days Inn he had marketed as a hotel until multiple converters approached him. “This was an attractive conversion because the property was built originally as a Ramada, so it included a full commercial kitchen, fitness center and pool,” says Webb. “Although the property was already zoned for multifamily, we took our plans to the city as a cautionary measure.”

"Hotel properties have been more affordable than comparable multifamily properties, although that may change as the hospitality market strengthens."

According to Webb, most hotel-to-residential conversions require little or no change to the structure or the infrastructure. “Hotels place a much higher demand on infrastructure than family housing,” says Webb. The buyer plans to retain all common space and hopes to lease the commercial kitchen to a restaurateur. Under-counter kitchen units will be added to each room, backed up to the tub wall to minimize plumbing work.

Private equity money funded the sale, but Webb believes brokers with the time and interest can identify potential government funding, given the high demand for affordable housing. Such funding can lower the total cost to the developer and can lower barriers, as it might be accompanied by local political support for the development. “This will make the property more attractive,” says Webb. “Another selling point is that, in some instances, these conversions are one of the few products for which you can obtain a certificate of occupancy before the project is complete, providing revenue much sooner than most conversions.”

Based on the project’s success, Webb plans to market one newly listed 200-room hotel property as a workforce housing conversion. While its location is best suited for workforce housing, Webb encourages brokers to consider other residential needs—for example, student housing for hotels near a university.

Pictured below: A former Days Inn hotel will provide housing for 120 low-income workers in Osceola County, Fla. The county has a deficit of 323,219 affordable housing units, according to the University of Florida’s Shimberg Center for Housing Studies.

The father-and-son team of Frank Amodio Sr., CCIM, and Eric Amodio, CCIM, of Amodio & Co. Real Estate in New Britain, Conn., sold a Class A office building twice—initially to an investor for office leasing and then to a developer for conversion to residential. With the already soft office market further softened with the pandemic, the Amodios approached the first owner to propose a conversion to multifamily. “The buyer was not interested in personally doing the conversion but was happy to sell, which is how we got the listing a second time,” says Frank Amodio. The response was strong, and the property sold at more than double the prior sale price three years earlier.

The 125,000-square-foot office building was built originally as a multistory industrial building. A previous adaptive reuse project converted it to office space. Thanks to its history as an industrial building, the existing floor load capacity was well beyond any residential requirement. The post-1990s conversion to office space took care of most internal structure requirements—elevators, sprinkler systems, asbestos and lead paint abatement, and other safety concerns. However, the property needed rezoning and the state required a traffic study.

“We actively cultivate good working relationships with city planning officials and the mayor,” says Eric Amodio. “The buyer engaged a land attorney to assist with approvals and an architect to prepare renderings for public meetings. While everything went through the proper channels, we believe our preparation and relationship with city officials expedited the approvals.”

The Amodios’ biggest takeaway from the project was that even though the property was valued significantly higher for multifamily, securing the approvals before taking it to market would have driven interest and further increased its value.

Given the potential time and cost savings, savvy investors will continue to be drawn to adaptive reuse versus new construction. Governments reward the green construction aspect of adaptive reuse with tax incentives, and communities welcome opportunities to reinvigorate or transform neighborhoods by repurposing at-risk structures. Commercial real estate brokers who think creatively about adaptive reuse possibilities and help lay the groundwork for a smooth conversion will benefit from this popular building trend.

While each conversion type calls for a unique strategy, keep these general tips in mind:

Is there a need, and can the property be used to fill that need? Keep in mind the highest and best use calculation.

Conversions often attract large corporate buyers, with corporate attorneys. Being prepared will give you confidence in negotiating a deal.

Know information relevant for adaptive use.

If possible, negotiate for the unexpected, such as the cost of construction increases.

Bring in others to fill expertise gaps when marketing and negotiating for different uses.