Why You Should Hire a REALTOR®

Today’s home buyers and home sellers demand increased efficiency, simplicity, and speed of service. They want to go online to find the best home. They want to use technology to market their home widely and for the highest price. They want quick and painless electronic closings. Today’s REALTORS® can help with all this and more. So, how are you getting this message out to consumers in your community?

Associations have long championed the use of a REALTOR® over selling a home without one and told consumers how REALTORS® are different from other licensees. Most associations have at least a webpage devoted to the topic—and many have an entire site (realtorsmakeitright.com, realstorynj.com).

Today, REALTOR® associations are ramping up their efforts to promote members in response to perceived competition for clients from certain iBuyers and other technology-enabled entities that claim to streamline buying and the for-sale-by-owner process.

Push Out the Value Message Via Social Media

The Jefferson City Association of REALTORS®, Mo., recently launched a public awareness campaign to promote the value of using a REALTOR® locally. “Despite the reported low number of FSBOs nationwide, we have a fairly large number of them,” says Donna Stone, RCE, association CEO. “This campaign will hopefully counteract that and bring the value of a REALTOR® to the forefront.”

The association hired a social media marketing company to produce REALTOR® value–driven Facebook and Google ads. “We also created pieces that our local lenders and title companies could make available in their offices and our members could use on their social media and marketing,” says Stone. “Our lenders and title companies are vocal advocates of using a REALTOR® because FSBOs often seek their advice and counsel on issues outside their expertise.”

Going All In to Support Members

To better promote the value that members bring to buying and selling a home, the Baldwin Association of REALTORS®, Ala., didn’t just launch a campaign or seat a committee; it rebranded its entire association late last year.

“During our strategic planning, leadership, along with other members, proposed a new mission as well as a new vision [for the association],” says Allison Woodham, Baldwin REALTORS® communication director. The idea was to transition the association from being member-facing to a consumer-facing advocate for REALTORS® and real estate.

The first step in the association’s conversion was a name change. Originally the Baldwin Association of REALTORS®, the name was shortened to Baldwin REALTORS® to emphasize that the organization is a group of local professionals, not an entity that regulates them. Next came the tagline: REAL Experts. REAL Advisors. REAL Advocates. Only a REALTOR®.

“We have invested heavily in social media, billboards, radio, and email blasts and other ways to promote the REALTOR® as the person to help consumers with every need [related to a sale],” says association CEO Sheila Dodson, RCE. “The messaging was strategically built to promote a REALTOR®’s invaluable expertise and knowledge, which directly benefit home buyers and sellers, as well as the Baldwin REALTORS® MLS [public home search], which offers real-time accurate listing data for local properties.”

The effort is paying off. Association data shows that since the rebranding and relaunching, there has been a 178% increase in new users to BaldwinRealtors.com. There’s been a 368% increase in users searching for homes from the Baldwin REALTORS® consumer search at the site, and on the social media front, there’s been a 266% increase in Facebook engagement and an 80% increase in Instagram followers.

“Our members have embraced the change and are using the collateral materials in their own marketing,” says Dodson. “We have also wrapped a vehicle that is getting rave reviews and getting noticed at public meetings and government meetings, especially.”

Data from NAR’s Home Buyers and Sellers surveys consistently detail how much less for-sale-by-owner properties sell for compared with those sold by a REALTOR®. The Georgia REALTORS® wanted local data: a comparison of homes sold by their members to those by non-REALTOR® licensees in the state.

“We hired a firm to analyze production and sales volume between REALTORS® and non-member licensees in our two largest MLSs to see how the two groups compared,” says Brandie Miner, the association’s director of communications. The results were convincing. REALTORS® make up 70% of participants in the Georgia MLS but are responsible for 90% of sales volume. Just more than half the participants in the First Multiple Listing Service are REALTORS®, but they account for 81% of the units sold. “REALTORS® vastly outperformed licensees in our study, and we think this is important for the public to know when they start the process of buying or selling their home.”

Georgia REALTORS® produced an infographic flyer detailing the study’s results to post online and for members to personalize and use as a part of their listing package.

What’s Your Message to Consumers?

Although members of the REALTOR® Association of Central Massachusetts haven’t specifically asked the association to promote the use of a REALTOR®, it’s implicit in the organization’s strategic plan, says Berkeley Wlodarczak, director of marketing.

The association’s most recent campaign to promote the value of a REALTOR® was a staff-driven initiative, says Wlodarczak. “We realized that the types of handouts we had to offer to the general public were only related to becoming a REALTOR® or to the benefits specific to our REALTOR® association, so we developed a new pamphlet about using a REALTOR® versus a nonmember.”

The pamphlet is available to members as a PDF and was also recently placed in 500 REALTOR®-branded bags distributed in an impoverished area of the community as part of a partner program with the U.S. Department of Housing and Urban Development.

No Need to Reinvent the Wheel

Local REALTOR® associations have great pride in their locally developed REALTOR® value campaigns, and most are willing to share their materials and ideas.  The National Association of REALTORS®’ consumer campaign, “That’s Who We R,” encourages local adoption and has spawned a wave of associations across the country leveraging the campaign’s wide range of free materials to showcase the difference REALTORS® make.

The Pennsylvania Association of REALTORS®, for example, used the campaign materials on digital billboards this past spring, and countless associations have printed T-shirts with the campaign’s slogan, pushed out the “That’s Who We R” videos and ads via social media, and placed print material in local publications.

“We’ve moved from producing our own creative to branding the social ads provided by NAR,” says Eric Berman, communications director of the Massachusetts Association of REALTORS®. “Because of the That’s Who We R campaign, we’ve been able to boost our statewide consumer awareness advertising and track the results, which have been very positive. The volunteers of our Consumer Awareness Task Force and members in general have been very excited about the campaign direction.”

Show Members You’ve Got Their Back

As perceived competition for clients and sources of accurate listing data heats up, show members that their association is proactively educating consumers and the media about the REALTOR® difference and why it pays to work with a REALTOR®. 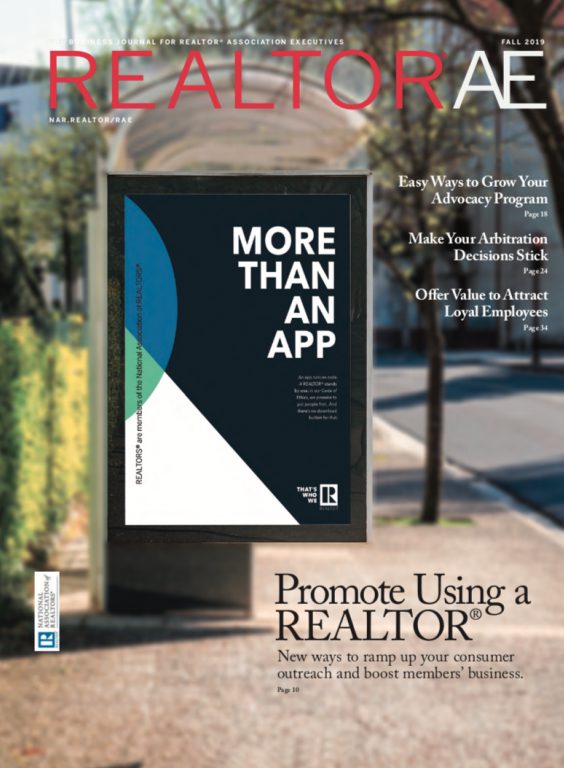