Why doesn’t the National Association of REALTORS® offer health care, members frequently ask. The quick answer is: It wasn’t legal before the 2018 U.S. Department of Labor rule, and even now, significant legal and legislative hurdles remain.

Associations of all kinds strongly applauded President Donald Trump’s executive order last year directing the Department of Labor to enact rulemaking that would expand association health plan eligibility to the self-employed and small business owners. Previously, the department did not consider associations with self-employed members to be eligible to offer health plans regulated under the large-group market.

Despite the new opportunities to offer health coverage, several hurdles remain. First, there’s a lawsuit that could overturn the new federal rule entirely, possibly before remaining parts of it go into effect. A dozen state attorneys general, including from the District of Columbia, are suing the department over the association health plan rule, arguing that the final rule violates consumer and state protections, among other claims. A decision in this case is expected as early as February.

Despite this, NAR is moving forward with exploring health insurance solutions by conducting surveys, retaining outside health insurance legal experts, and consulting with large insurance companies, along with other efforts to determine the potential options for members.

There’s also this: President Trump’s executive order is just that: an executive order, not a law. The rule could be overturned by a new administration. NAR-supported legislation such as the Small Business Health Fairness Act of 2017 (H.R.1101), which would more firmly establish association health plans, passed the U.S. House of Representatives in 2017. However, it was not taken up by the Senate and would need to be reintroduced in the new Congress.

Another major hurdle association health plans face is that they are subject to different rules in each state. The federal rule enabling association health plans leaves many details up to the 50 states and does not pre-empt state regulation of insurance. “This means we have a fragmented regulatory environment of hostile states and friendly states, with some states embracing the new rule and some rejecting it, and some including sole proprietors, some not,” says Christie DeSanctis, an NAR policy director.

As a result of the different regulatory approaches among states and the pending litigation causing general uncertainty, no national health insurance carrier is willing to offer nationwide insurance to NAR at this time, says DeSanctis.

Meanwhile, NAR has co-founded the Coalition to Protect and Promote Association Health Plans, a broad multi-industry coalition of trade associations, to lobby states to view the federal rule more favorably and to push for legislation that would protect large-group eligibility for sole proprietors.

What about state or local solutions?

The National Association of REALTORS® has offered this service since 2013 through its REALTORS® Insurance Marketplace. Every year, thousands of members find affordable coverage through this member benefit.

“We help members navigate major medical plans currently available through the ACA exchanges and outside of them,” says Shannon Kennedy, president of SASid Inc., administrator of NAR’s REALTORS® Insurance Marketplace. “Plus, we explain the benefits of supplementary plans and offer group dental and vision.”

For 2019, REALTORS® Insurance Marketplace began offering new flexible term health plans that provide a more affordable insurance option. New federal rules expand the time limit of these plans from 60 to 364 days and allow limited renewals. This change, and the elimination of the mandate to have qualified health insurance or face a tax penalty, enables members to consider lower-cost major medical plans tailored to their needs.

“For REALTORS® who struggled to afford major medical plans through the ACA exchanges in the past, these new flexible term plans may be a solution,” says Kennedy. “Plus, if you’re a healthy young person with comfortable savings, you may opt to not pay for broad coverage that includes maternity care or preexisting conditions.”

The Colorado Association of REALTORS® also saw the removal of the mandate and the expansion of flexible term policies as an opportunity to offer members a low-cost, limited medical plan for less than $200 a month. This plan is intended for individuals who want coverage to see a doctor, specialist, or urgent care a few times a year for unexpected health issues, according to the association’s website.

Some states, however, restrict the sale of short-term or flexible-term medical plans or require enhanced disclosure to consumers about the limitations of coverage.

The Colorado Association of REALTORS® said in a statement that it hopes to eventually offer members more alternatives to increasing insurance costs, but major medical carriers in the state, such as Aetna, Anthem, and Cigna have taken a wait-and-see approach and are not offering new AHPs until the DOL issues more clarification on its rule.

When it comes to offering members full health insurance plans under the new Department of Labor rule, the Baldwin County Association of REALTORS® in Alabama may be a trailblazer. In July 2018, Baldwin County CEO Sheila Dodson, RCE, approached Blue Cross and Blue Shield of Alabama, the association’s insurance provider for its staff, about health insurance plans for her 2,300 members. Without any health history or demographics about membership other than the average age of members, Blue Cross came back with surprisingly affordable rates, she says.

With a coverage commitment in hand, Dodson and her leadership went to work tackling the details needed to launch the program by the end of 2018. Who would sign members up and administer the program? Who would manage all of the federal and state regulatory paperwork? How would COBRA coverage be offered when a member leaves the association? Could members pay monthly premiums by credit card since they often don’t receive a regular paycheck?

“Blue Cross worked with us to find a third-party company to manage the program and meet our unique needs,” says Dodson. The administrative costs are incorporated into participants’ health insurance premiums. “It wouldn’t be fair to use association funds for the program since we knew not all members would take advantage of it, and we were very upfront about the fees in the premiums.”

Baldwin County does not subsidize the insurance and the only cost was significant staff time at first, says Dodson, plus setup fees with the third-party administrator, Lockard & Williams Insurance Services. Baldwin County signed up 200 members for 2019.

“Being able to offer health, dental, and vision insurance to our membership is one of the most defining accomplishments of my career,” said Dodson in a statement.

Despite the pending federal lawsuit against association health plans, Dodson says Blue Cross assured her that Baldwin County’s health insurance program wouldn’t be affected, regardless of the outcome.

Among state associations, the Nevada Association of REALTORS® opened its association health plan for enrollment in January. The major medical plans, which meet the ACA minimum essential coverage guidelines, start at as little as $226 a month, but are based on members’ age.

Efforts continue on all fronts

State and local REALTOR® associations, along with NAR, are working toward meeting members’ health insurance needs on a wide range of fronts with a large menu of options. 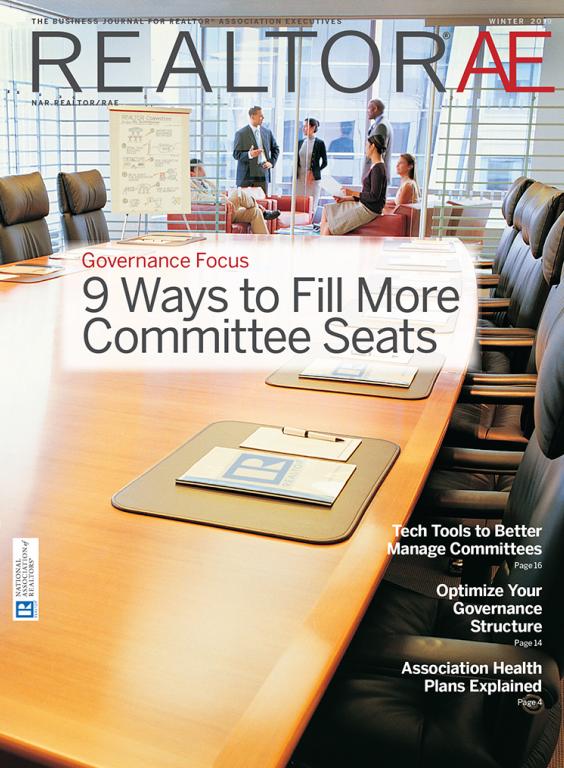 Take a Fresh Look at Committees