Soaring Past an 'Inconvenience'

Not even cancer could stop my commitment to share knowledge and keep achieving.

Everyone’s leadership journey is unique. In 2005, I was asked to be a director at my local association; I accepted and spent two years on the board. I then submitted my application to continue as a director. The association executive and the current president-elect asked me to stay after a board meeting. They said they’d like me to consider a different position—president-elect.

I was stunned. I thanked them for their confidence. That’s when I realized how blessed I had been over the years in the real estate industry. I was a successful agent and fortunate to have a great team and award-winning production, and I realized that this was a way for me to give back. I accepted and became 2008 president-elect. Never in my wildest dreams did I ever think I would be president of our local association. And if you told me I would be state president five years later, I would have laughed.

My AE told me about the Maryland Leadership Academy. I applied and was accepted. I had no idea what to expect. In our first class, I knew it was different from anything I had done before. The camaraderie was excellent, and I formed bonds and friendships. A month after I graduated, the state president-elect asked me to serve as vice chair of the academy and chair it under her presidency the following year. Again, I was stunned, but I accepted the challenge.

Leading in a Crisis

I was sworn in as the 2009 president of the Southern Maryland Association of REALTORS® in the third week of September 2008. On Sept. 29, the market crashed. No one saw it coming; there had been a lot of talk about a “bubble,” but the market was so robust, it didn’t seem possible. One day, we were getting multiple offers on listings, then the offers stopped almost overnight.

It was difficult to see our membership struggle. Members shared their business and personal hardships with me, and I applied what I learned in the Leadership Academy—especially in communication and media relations—to help. I found myself writing encouraging, inspirational “Letters From the President” in the local newsletter.

As I wrapped up my year as president and chair of the state Leadership Academy, I got a call from the incoming state president asking if I would accept an appointment to the state executive committee. I told her I would be honored. After about four months on the executive committee, the current president said I should consider getting on the leadership ladder. At this point, I was no longer stunned when asked; I had learned that people often see things in you that you may not recognize in yourself.

I did some research and decided to move forward. On March 17, 2011, I entered the race for state secretary. I didn’t know the two people I was running against, but I got to know them as we traveled across Maryland meeting with local boards of directors. In July, I had an interview with the nominating committee. They usually notify people of their decision by phone, but since I was still on-site, they asked me to step back into the room and congratulated me on being selected as the 2012 secretary of the Maryland Association of REALTORS®.

Over the next couple of months, I met with the other two candidates. We made a resolution to move forward in unison. One didn’t want to run again, and the other said she would return the following year. I promised I would do everything I could to help her move forward. She ran the following year unopposed. She did an outstanding job and is one of my closest friends to this day. After I complimented her on her inaugural address, she said, “I knew you were there and if I had trouble, you’d have my back.” I don’t believe I have ever received a finer compliment.

I learned a lot about our state association while serving on the executive committee. And I started getting better acquainted with the National Association of REALTORS®. After a meeting one day, the immediate past president asked if I knew about NAR’s Leadership Academy. She had graduated from its first class and thought I would be a good candidate. I submitted my application; a few months later, I was accepted into the NARLA class of 2012.

A Diagnosis, Not a Definition

In September 2011, I was sworn in as secretary at our state convention. A busy schedule began with a tour of the state to support incoming local leaders. I immediately hired an assistant to be sure my clients were taken care of while I handled association responsibilities. About a month after taking office, I started feeling ill. A doctor told me I had a severe sinus infection. In November, I attended the NAR annual conference in Anaheim, Calif., and we had our first NARLA class. I felt worse but pushed through. My doctor changed my medication three times. By the time I headed to the President’s Circle Issues Conference in Miami in February 2012, I had little energy. I flew home on a Sunday and was in the doctor’s office Monday morning. I was diagnosed with stage 4 large B-cell non-Hodgkin’s lymphoma.

My world changed in a matter of minutes, but I refused to let the diagnosis define me. I told family and friends I wouldn’t say the word “cancer” and instead called it “my inconvenience.” I felt that the cancer had already had enough energy since it had reached stage 4. If they wanted to discuss “the wellness of my inconvenience,” we could have a conversation.

My hair fell out after the first chemotherapy treatment. We were getting ready to have a state board meeting, and I knew I had to face the leadership team. Needless to say, they were surprised to see me with a bald head. I explained what was going on and offered to step down, but they offered their full support as I battled the beast. I asked to speak early at the state board meeting so I could explain my new appearance sooner rather than later. I was taken aback by the outpouring of kindness, love, and support, and was more inspired than ever to fight.

The next few months were a roller coaster ride. Family and friends asked if they could accompany me to treatments, but those often took seven hours, and I didn’t want anyone to sit there all that time. I used the time to write emails and texts, reflect, and pray. Chemo took its toll: All I could do was lie on the couch for days after a treatment.

I cleaned off the fireplace mantel and placed all of the cards and emails I received there for inspiration. There were times I would feel sorry for myself; I would give myself three minutes to process those feelings, then go to the mantel to read some of the get well messages, count my blessings, get back to gratitude, and force myself to move on. I also learned to laugh at myself.

At one point, I needed a blood transfusion. Two days after the transfusion, I ended up in the hospital with shingles and MRSA. It was April, and the following week was a NARLA class in Chicago. I had booked the room and a flight. I came home from the hospital on a Sunday and told my family I was going to my class in Chicago on Tuesday. This did not go over well.

I explained to them that if I missed a single class, I couldn’t graduate, and I explained how important graduating was to me. After promising I’d rest immediately after class, they reluctantly backed off. I hadn’t yet shared “my inconvenience” with class members. Monday afternoon, I wrote them an email and said that I would see them the next day.

The encouragement, love, and support that came from each of them felt like family on steroids; I tear up thinking about it. I had never experienced such a connection with a group of people before.

The NARLA class was pivotal in my healing. Along with my family and friends, the class members were there to lift me up. By July, through the grace of God, I was in remission, and I went on to serve as president-elect, president, and immediate past president. I was first in my class to become state president. Now, most members of my class have been state presidents or will be soon, or they have held higher positions in state and national leadership.

Every year after I graduated from NARLA, I asked to be on the Leadership Advisory Group Committee. The academy inspired me so much that I wanted to pay it forward. NARLA taught me the importance of not just working hard, but working smarter. It encouraged me to be engaged and serve effectively as a leader. Not only did it make me a better real estate agent and leader, it made me a better person. My perseverance paid off: I was appointed to the committee in 2017 and now serve as 2020 chair.

My goal is to lead by example and empower as many people as I can along the way. I’m working closely with NAR to create the best curriculum available and share higher achievement through education. We can make a difference by putting our expertise to work to raise the confidence of our peers. And in the process, we’ll earn their respect and that of the general public. 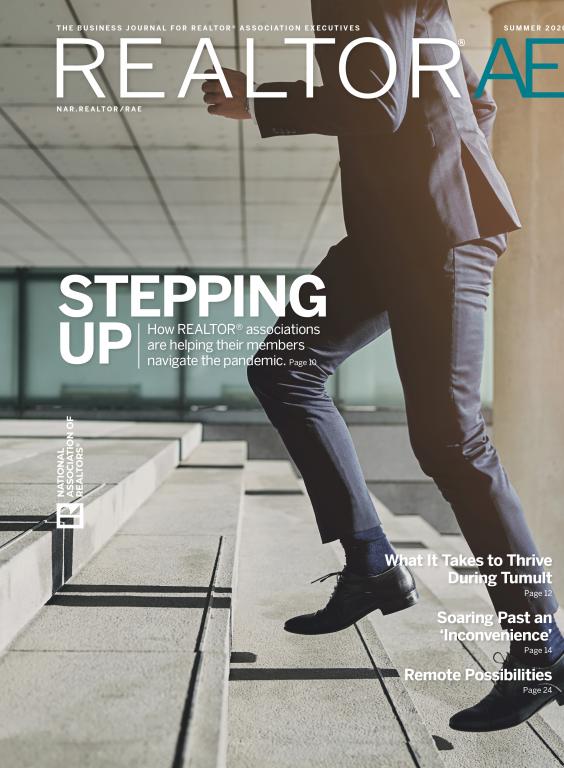 What it Takes to Thrive During Tumult