How to Build a Socially Minded Enterprise

Committing to philanthropy in your community can double as a powerful way to support causes you care about and make your business more visible. But sometimes, even with the best of intentions, you may find yourself short on time or money to give something back consistently. Rookies who have yet to land their first commission or seasoned pros who are grappling with a sales slump or unexpected expenses may be hesitant to get started.

So when is the right time to incorporate philanthropy into your business plan?

You can get involved in charity work at any point in your career, regardless of how your market is faring. But the earlier you commit, the faster your efforts are likely to grow, says Maura Allain, a sales associate with RE/MAX Premier Properties in Louisville, Ky., who is a high-profile community booster. If financial barriers are holding you back, she suggests, focus on action instead of money by participating in community service projects. “It would help your business in the long run if you could get involved in something sooner because your sphere will grow,” Allain says.

However you choose to give, make sure you’re able to do it consistently, says Michael Pink, RENE, founder and managing broker of MAP Real Estate in Chicago. Pink’s company has given more than $550,000 to charity since 1995. He also launched a nonprofit in 2010 called Investing in Communities, an agent referral platform with a built-in fee split for charitable donations. “Many real estate professionals engage in philanthropy on a deal-by-deal basis,” Pink says. “If you want to beat your chest about this great thing you’re doing, then show your conviction.”

To gather support for your efforts, reach out to past clients and others in your sphere. Some may not feel as passionately as you do about your cause, but that shouldn’t keep you from moving forward. Allain started a program a year ago to support the Louisville public schools and their employees. Under the program, which Allain created in partnership with a title insurance company, teachers and other school staff can receive a discount of up to $650 on closing costs. Allain also discounts her share of the commission she charges to sellers who are district employees.

On top of that, Allain donates $500 of her commission on each eligible transaction to the school of the client’s choosing. Because of negative public perceptions about the quality of the school district, some in Allain’s circle thought her energy was misplaced. “People hear one bad story [about a school], and they want to leave the city,” Allain says. “Keeping families in Louisville is a big deal because so many are leaving.”

When she became aware that some residents found her cause controversial, Allain doubled down with a campaign to raise awareness about her efforts, releasing radio ads, social media calls to action, and brochures distributed at schools. In the last year, she has helped about 15 qualified clients buy or sell through the program. She’s even gained a handful of clients outside the education system who came to her simply because they liked what she was doing, Allain says. “You have to know why you’re helping people and never forget that. Keep putting yourself out there, and you’ll find people who care about the same things you do.”

Focus on Results, Not Money

When you’re ready to start communicating your good works to your client base, it’s important to highlight the people you’re helping rather than your fundraising or community service accomplishments, says Anthony Marguleas, GRI, broker-owner of Amalfi Estates in Pacific Palisades, Calif. His company focuses on multimillion-dollar homes, affording him and his seven-agent team the ability to give $1 million to charity in just the last five years. But that figure, impressive as it may be, isn’t what Marguleas chooses to promote. “I’ve almost stopped telling people how much money we give because other agents go, ‘Well, I don’t have a million dollars to give away,’ ” he says.

Instead, in his marketing, he shows the results of his brokerage’s donations: temporary shelter for 223 stray dogs, housing for 118 homeless people, funding for nine Make-A-Wish projects (at $10,000 apiece), and tattoo removal and job training for 188 former gang members. “People care more about other people than dollars,” Marguleas says.

Marketing your efforts in this way not only helps you make stronger and more personal connections with prospects and clients but also demonstrates to colleagues who are watching your progress how they might be able to start similar programs, Marguleas says. “This is our way of combating the impression that real estate agents are overpaid and make millions of dollars for very little work,” he adds. “We essentially market ourselves as a philanthropic company that specializes in real estate. It’s a different kind of conversation piece when you put it that way.”

More than anything, Pink says, you must have confidence in your intention to associate your business with a charity. He says he could have given away more money sooner if he felt more self-assured early on. “I wanted to become known for being a charitable person and professional, but I didn’t tell anyone when I started because I honestly wasn’t sure if it was appropriate to mix making money and doing good,” he says. “But as I explored it more, I came to think that it’s actually not a good thing to have a business that doesn’t have some kind of social mission. I don’t think social enterprise is going to go out of vogue.”

However you choose to work philanthropy into your business, it’s important to understand the social responsibility you accept as a community leader. While you may reap great business rewards from doing good in your community, stay focused on the primary mission of your volunteer work, Marguleas says. “On your tombstone, do you want it to say you’re a million-dollar agent who sold however many homes, or do you want it to say you were someone who touched lives?

A company’s successful charitable venture often requires buy-in from agents, says Celia Robertson, owner of House 2 Home Realty in Carterville, Ill. It may be wise for brokers to seek agent support before officially launching any endeavor. You may even want to strongly encourage participation by agents, as Robertson does, and ask for a commitment from new agents during the onboarding process.

Robertson’s 43-agent company launched in 2007 and began getting heavily involved in community service projects in 2011—everything from raffles to support food pantries, community garage sales, and fundraising galas. Last year, the combined efforts by House 2 Home brought in $25,000 for charity. “When we first started, it was the same six to eight agents doing everything. Everyone had good intentions, but people get busy. We had to make it a general rule that if we vote to do something, it has to be 100% participation.” And she always gets it. 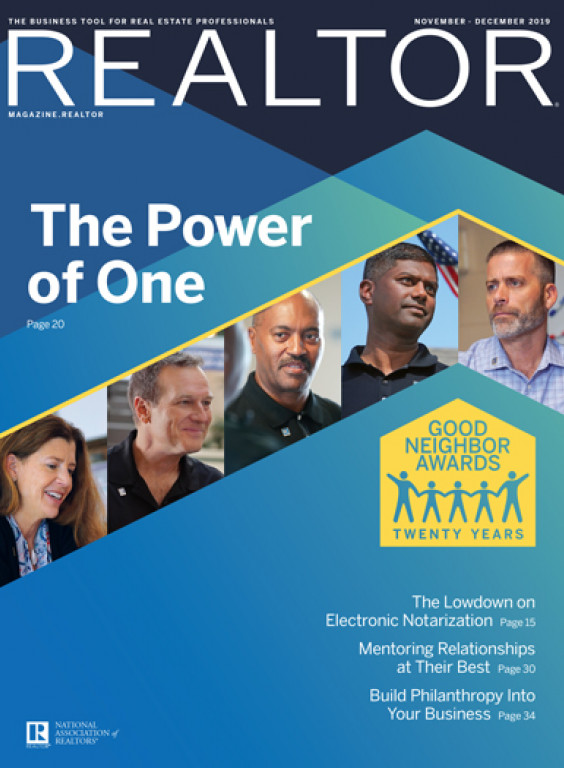 Adopt a Giveback Mindset to Inspire Consumers to Work With You