Consistent with previous quarters, the two RESPA cases retrieved this quarter examined referral fee and kickback schemes. In one case, the borrowers alleged violations of RESPA, claiming the lender and purchaser failed to disclose the financial benefit to them resulting from the sale of the property and that the payments were designed to create a windfall. The court declined to consider the merits of these claims on the basis that that they were more pertinent to the borrower’s pending appeal of the state foreclosure action. In the second case, the court determined that the borrower’s RESPA claims based on alleged kickbacks and unearned fees was barred by the statute of limitations.

The court declined to consider borrower’s RESPA claims that on basis that they were more pertinent to the borrower’s pending appeal of the state foreclosure action.

Borrower’s RESPA claim based on alleged kickbacks and unearned fees was barred by the statute of limitations.

Borrower entered in to a mortgage loan agreement with Bank of America for the purchase of a property. Upon default of this loan, Bank of America initiated foreclosure proceedings. The Borrower alleged that Bank of America violated RESPA by failing to disclose that it would gain a financial benefit from the borrower’s loan. While the borrower failed to articulate the specific RESPA provision(s) allegedly violated, the allegations suggested that the borrower’s claims stem from RESPA’s prohibition on kickbacks and unearned fees. The court found that the Borrower’s allegations for violation of RESPA were insufficient as they failed to identify the referenced kickbacks; state that they were made in exchange for a referral or for “no, nominal, or duplicative services”; describe the financial burden the borrower suffered; or explain how any damage the borrower suffered was a result of Bank of America’s acts or omissions. Additionally, the court found the allegations were time-barred and therefore dismissed borrower’s claims. 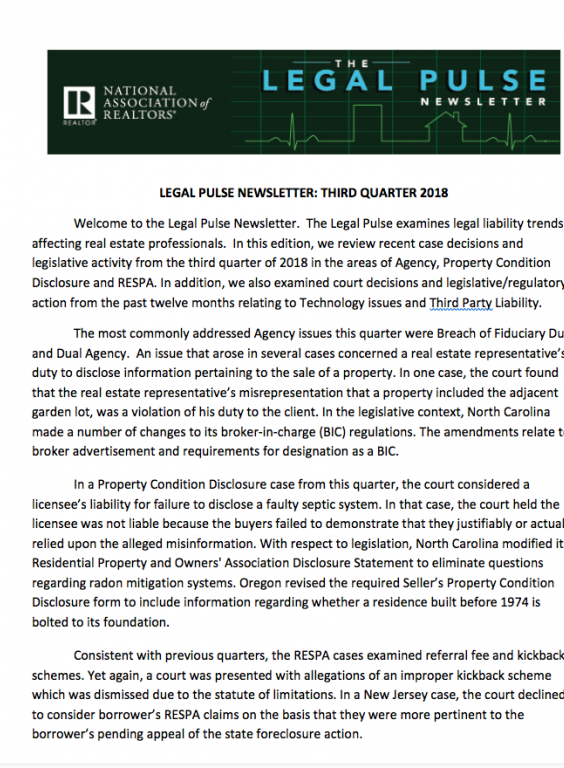