The deceptive trade practices/fraud cases touch on a variety of alleged misconduct, often involving an undisclosed relationship between the real estate licensee and another person. In other instances, the cases arose out of the failure to make a proper disclosure of an important fact, such as the square footage of a home. Once again, the accuracy of the Zillow Group’s Zestimate tool came under court scrutiny. In the last case, a real estate company was found liable for the actions of a real estate representative that attempted to secure a profit.

Informal fiduciary relationships, sometimes referred to as “confidential relationships,” may give rise to a fiduciary duty where one person trusts in and relies on another.

Buyers and their homeowners’ association (“HOA”) sued the developer-seller Benchmark, a limited partnership with two limited partners for breach of fiduciary duty. Both of Benchmark’s limited partners were real estate brokers. The limited partners’ real estate firm represented the seller in the transactions. After the buyers purchased the property, a dispute arose as to the questionable condition of the private road in the subdivision. The buyers and the HOA brought suit against the developer-seller for fraud by breach of formal and/or informal fiduciary relationship, and for violations of the Texas Deceptive Trade Practices Act (DTPA). The trial court granted a directed verdict on the fiduciary duty cause of action, and a jury found in favor of the seller on the DTPA claim. Buyers and the HOA appealed.

In ruling on this issue, the court noted that a broker owes a fiduciary duty to a client while acting on behalf of that client. No formal fiduciary relationship, however, existed between the buyers and seller. Additionally, there was no evidence of a confidential relationship between the buyers and the developer-seller.  The buyers argued that a fiduciary relationship was created through the covenants and restrictions governing the subdivision. However, for an informal fiduciary duty to exist in a business transaction, the special relationship of trust and confidence must exist prior to, and apart from, any agreement made the basis of the suit.  The court found there was no evidence of any such prior relationship apart from the contract. The court affirmed the directed verdict in favor of the developer-seller.

Broker listed the seller’s condominium on the Multiple Listing Service (MLS). The MLS database contains a drop-down menu from which the listing representative can select “appraisal,” “builder,” “tax,” or “other” as the source of the information about the subject home's square-footage. The broker selected “tax.” The MLS database accessed the unit’s square footage information from Dallas Central Appraisal District (DCAD) records. The buyers claimed that the listing broker misrepresented the property’s square footage by not specifying that the square footage was the “total area” and not the “livable” square footage. Based upon this alleged misrepresentation, the buyers asserted claims for violations of the Deceptive Trade Practices Act (DTPA), statutory fraud, and negligent representation. The broker appealed a jury verdict awarding the buyers $32,335.48 in damages, plus attorney’s fees.

The appellate court determined that the listing must be interpreted as representing the unit's price per square foot and that the listing did not guarantee the accuracy of the DCAD’s records. Additionally, it found that no reasonable juror could infer that the broker acted with the intent to deceive the buyers. Failure to disclose a fact is actionable if the seller knew the information that should have been disclosed at the time of the sale, and requires actual knowledge of the non-disclosed information.  The appellate court concluded that the evidence was legally insufficient to support the jury’s finding that the broker made a misrepresentation or that the broker was aware at the time that DCAD’s records were incorrect. Accordingly, the appellate court ruled in favor of the broker, reversing the trial court’s judgment.

A duty to disclose imposed by the licensing law is not waived by an as-is clause.

Buyer purchased a residential lot that adjoined a residential lot and a golf course. The agreement provided that the buyer was purchasing the property “as is,” “where is,” and “with all faults.” The lot included a small parcel of land, which had previously been an out-of-bounds area between the golf course and the lot. After the purchase, the buyer learned that the owner of adjoining property claimed ownership of the out-of-bounds area. The buyer sued the seller’s broker and brokerage firm for common-law negligence and intentional misrepresentation of the boundary and the property’s zoning, claiming that the brokerage knew of the other party’s claim to the property. The buyer also made a claim for violations of the real estate licensing law based on misrepresentation or failure to disclose information in the purchase process. The brokerage moved for summary judgment on all claims, arguing that the purchase agreement placed the burden on the buyer to investigate boundary and zoning issues. The district court held that the proper disclosures were made and that the buyer waived any claims by signing the purchase agreement. Accordingly, the district court granted the broker and brokerage firm’s motions for summary judgment. The buyer appealed.

The Nevada Supreme Court reversed in part, noting that the general rule foreclosing common-law liability for nondisclosure when property is purchased as-is does not apply when the seller knows of facts materially affecting the value or desirability of the property that are known by or accessible only to the seller, and the seller also knows that such facts are not known to, or within the reach of the diligent attention and observation of the buyer. The record demonstrated that the buyer expressly agreed that it would carry the duty to inspect the property and ensure that all aspects of it were suitable prior to closing, and that the information regarding the lot lines was reasonably accessible to the buyer. However, the court determined that the buyer did not waive any of real estate broker violations based on statutorily imposed duties. Except for the duty to present all offers to the client, “no duty of a licensee may be waived.” The Nevada Supreme Court concluded that the trial court erred in granting summary judgment on the real estate license law claims and reversed the attorney fees and costs awarded.

A database’s estimates of property values were non-actionable opinions.

Property owners brought an action against Zillow after learning that the Zestimates, which provides an estimated value for real property based on a proprietary algorithm, for their parcels were below the amounts they hoped to realize. The property owners alleged that Zillow’s estimates of value of their parcels violated the Illinois Real Estate Appraiser Licensing Act and Illinois Deceptive Trade Practices Act (DTPA). The district court dismissed the complaint in its entirety for failure to state a claim, and the owners appealed.

The appellate court determined that by having labeled Zestimates as estimates (something built into the word “Zestimate”), Zillow is outside the scope of the DTPA. The court concluded that the Illinois Real Estate Appraisers Licensing Act did not create a private right of action and that the database's estimates of property values were opinions, which were not actionable. The Court of Appeals affirmed dismissal of the claims.

The matter proceeded to trial. The jury returned its verdict in favor of the plaintiff awarding the plaintiff $455,485 in compensatory damages and attorney’s fees, $300,000 in punitive damages and $48,000 in additional attorney fees in the event of an appeal by the defendant.1

Buyers may not seek damages from agent under a negligent misrepresentation theory based on breach of disclosure duty imposed on seller.

The plaintiffs, school teachers residing in California, who purchased a condo with the intent of using it as a vacation home, by leasing it for nine months of the year, and living in it for the remaining three months of the year.

After the purchase, the condo board of directors informed the buyers that the minimum lease length had been increased from six months to one year. Buyers sued their real estate agent and the seller’s real estate agent for negligent misrepresentation and civil conspiracy.  Defendants filed motions for summary judgment.

The trial court granted the motions for summary judgment, finding that the buyers provided no factual basis other than purely speculative allegations that the defendants did not disclose documents and that they did so willfully in an illicit agreement with the other alleged co-conspirators. The court also held that La. Rev. Stat. § 9:1124.107(A), which relates to the disclosures that must be provided to a buyer on the resale of a condominium unit, imposes a duty on the seller and not on either the purchaser's or seller’s real estate agent. Therefore, that law could not be the basis for a claim of conspiracy or negligence for failing to turn over information.

1. Case has not been appealed at this time.
Search Legal Pulse 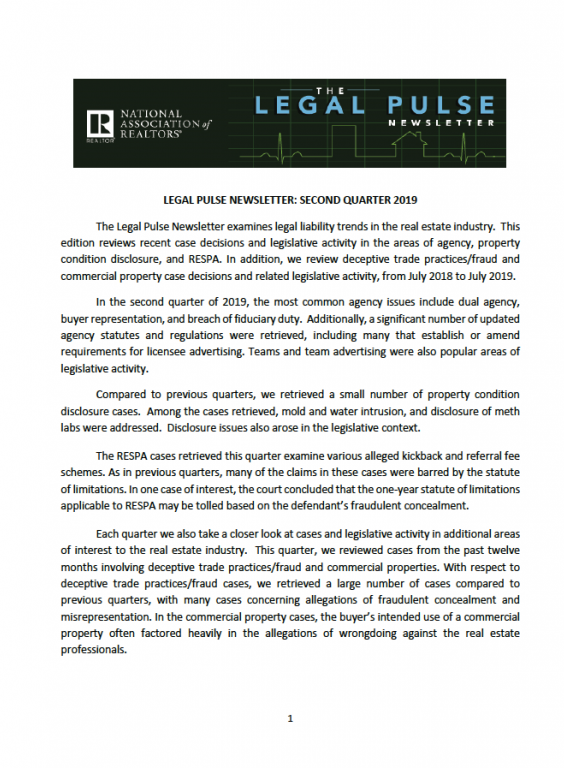