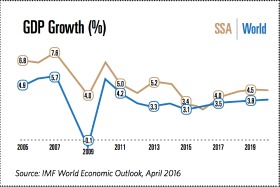 Africa is a study in contrasts. After decades of stagnation, the continent’s fortunes began to improve, largely through the export of rich natural resources, including oil and gas, metals and minerals, and agricultural commodities like tea, coffee and cocoa. Wealth gained from these resources helped fuel investments in other key industries and infrastructure projects.

The continent’s story shifted two years ago, however, when a sharp decline in oil and other commodity prices put severe strains on many of the largest SSA economies. In April 2016, the International Monetary Fund (IMF) acknowledged that, overall, the region displays a markedly weaker economic picture, but medium-term growth prospects remain favorable. As a continent, Africa’s projected GDP growth still outperforms the rest of the world.

In addition to working through its own challenges, Africa is seriously impacted by China’s fortunes, which has become the region’s major trade partner and an increasingly important source of foreign direct investment and financing. After running a strong surplus trade balance with China for nearly 15 years, the balance recently turned to a deficit, as China deals with its own economic issues.

Its population is also relatively young. Currently, 200 million Africans are between 15 and 24 years old. The World Bank estimates that Africans are, on average, 10 years younger than the rest of the world (19.7 years versus 29.7 years, as of 2012).

Even though the average age is expected to increase to 25.4 years by 2050, Africa doesn’t face one common challenge in other regions—supporting a growing population of aging retirees. In contrast, Africa’s youthful population is broadly considered a major asset for future growth, as long as employment opportunities also remain present.

The flight of people from rural to urban areas and the growth of megacities is a global trend that is amplified across Africa. While the continent has traditionally lagged in urbanization rates (40 percent, as of 2014, compared to 54 percent worldwide), this figure will increase to 47 percent by 2030 and 56 percent by 2050.

Africa now has 50 cities with populations over 1 million people. A century ago it had one (Cairo).

Double-digit growth rates are common, including more than 70 percent increases (by 2025) in the populations of Nairobi (Kenya), Kinshasa (Democratic Republic of Congo), Luanda (Angola) and Dar es Salaam (Tanzania).

Lagos, Nigeria’s largest city, is expected to be the 12th largest city in the world by 2025 and has already displaced Cairo as the largest city on the continent.

While the largest cities attract the most attention, the United Nations expects the fastest-growing urban areas to be medium-sized cities and cities with less than one million inhabitants. Other growth pockets include so-called satellite cities on the outskirts of major urban areas, such as Eko-Atlantic (Nigeria), Hope City (Ghana), and Konza City (Kenya).

Across Africa, the vast majority of people still live in poverty. In recent years, however, numerous countries have witnessed substantial growth in the middle class— a trend that’s expected to accelerate.

According to Standard Bank, by 2030, an additional 14 million middle-class households are expected to be added across 11 fastgrowing countries. They will comprise 75 percent of the total African economic output, bringing the total number of middle-income households above 40 million.

Commensurate improvements are also expected in consumer spending. A 2014 report produced by Investec Asset Management for the U.S. Chamber of Commerce predicts Africa’s buying power will nearly double by 2020 to US$1 trillion, including US$200 billion in discretionary spending.

The growth of Africa’s urban centers is driving demand for every type of real estate development, both residential and commercial. “There’s a desperate need for shopping centers, supermarkets, safe hotels, American-style office buildings and more,” says Howie Gelbtuch of Greenwich Realty Advisors Incorporated in New York and past chairman of the Counselors of Real Estate.

Retail property development is largely in response to recent growth in the urban middle class. For example, South African retailers Shoprite and Pick n Pay have entered markets across the continent. Modern shopping malls, on the other hand, are harder to find. Perhaps the most significant recent news, in terms of retail investment originating outside the continent, was Wal-Mart’s $2.4 billion acquisition of South African retailer Massmart, finalized in 2012.

Multinational companies hoping to get in on the ground floor of Africa’s growth engine are finding it difficult to secure office space. In Luanda, Angola, for example, monthly rents for prime office space can go for US$150 per square meter/ month. Converted to square feet/year ($167), this is roughly twice the cost of office space in Manhattan ($75).

As more and more people flock to Africa’s cities, demand has grown for everything from high-end luxury properties to affordable housing. In time, the cost of urban real estate will likely rise, triggering new affordability issues.

Developers are already challenged to become more innovative in their design and construction techniques.

The absolute size of Africa’s urban populations also provides numerous niche opportunities, especially among younger members of the population. For example, student housing is one segment in need of attention. In South Africa, over 600,000 students in higher learning institutions did not have adequate housing in 2015. Similar shortages exist in Nigeria, Kenya and Ghana. While opportunities appear abundant on the macro level, it’s important to note that each market has a unique story at the micro level. To be successful, investors must carefully study local market demand in order to develop well-planned and well-located properties. 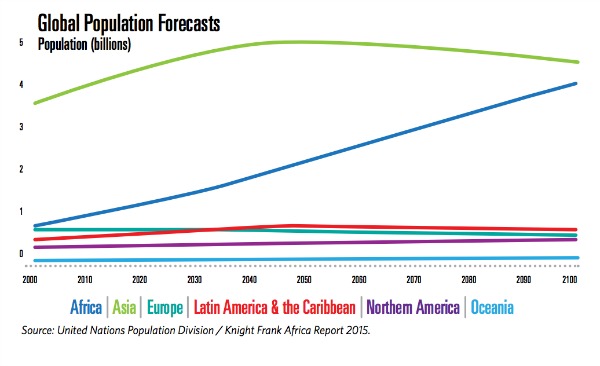 To be sure, real estate investment in Africa is not without substantial risks. Before its economies can reach their full potential, numerous significant hurdles must be cleared, including (but not limited to):

Lack of roads and railways makes it difficult and expensive to move goods. For example, it’s more expensive to ship goods 500 miles inland from Lagos to Kano, Nigeria than to send the same shipment from Lagos to Beijing (7,000 miles). Only 16 percent of roads are paved, compared to 58 percent in South Asia.

Many areas lack telecommunications, high-speed Internet, reliable electricity and potable water. Only a quarter of the population has access to electricity

Developing countries tend to receive the lowest scores in Transparency International’s Corruption Perception Index. In its 2015 ranking, six of the 10 worst countries are African (GuineaBissau, Libya, Angola, South Sudan, Sudan and Somalia), while 40 of 46 countries in SSA show serious corruption issues. For example, police roadblocks that can only be passed after paying a bribe are common.

Improvements have been made, but much more is needed. On a percentage basis, SSA has seen slow declines in both poverty and hunger, but on an absolute level, the number of people experiencing poverty and hunger remains steady. Forty percent of the population lives on less than US$1.25/day.

A wide variety of street crime is common and often increases on weekends when senior police have days off. Even in South Africa, many drivers don’t stop for red lights at night if there are no other cars, and schoolchildren protect their backpacks by wearing them over their chests. Militant terrorists pose more serious threats in several nations. 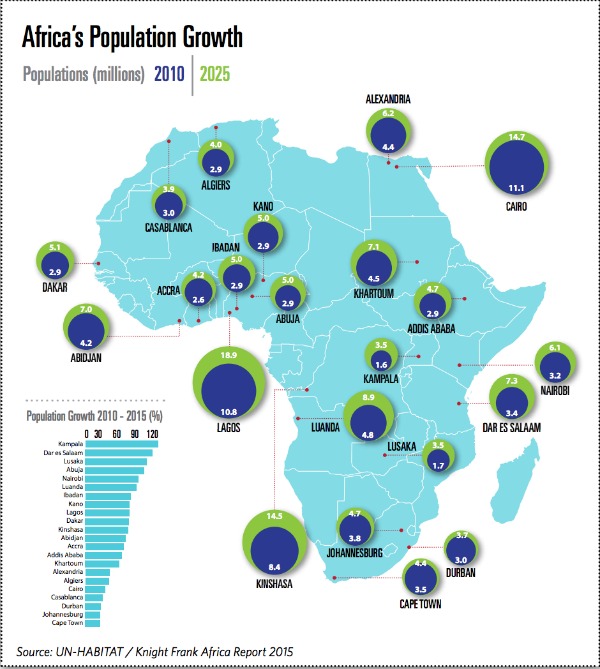 In spite of these and other challenges, it’s worth noting several key accomplishments:

Many African professionals who lost overseas jobs during the Great Recession have returned to their native countries. Possessing top-grade skills but lacking employment opportunities, they began building new businesses focused on solving local problems. Their innovations are creating core intellectual properties fully capable of competing on a global stage.

Significant progress has been made, particularly with regard to innovative mobile telephone technologies (for financial services) and through the emergence of large Pan-African banks. These two developments have helped mobilize and allocate financial resources, which in turn has reduced volatility and spurred growth. In fact, if remaining gaps were filled, the IMF estimates that countries in the region could see an additional bump in growth approaching 1.5 percentage points.

While there are dire needs for all types of real estate developments, Howie Gelbtuch insists projects must be completed with a local partner who is very familiar with the local market and its people. Also, many countries will only allow foreign ownership stakes of no more than 49 percent. (Wal-Mart’s 51 percent purchase of Massmart was a very rare exception.)

Finally, he points out that training is another area of opportunity. “Capitalism is new to many Africans. Basic valuation techniques need to be learned, as well as learning how to access good market data,” says Gelbtuch. “The information is there, but in many cases, junior locals don’t know how to obtain or analyze it.” 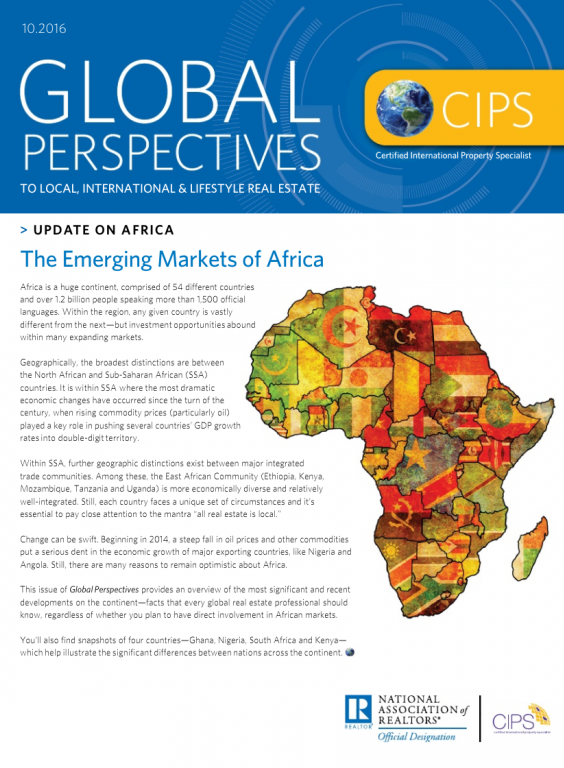 The Emerging Markets of Africa