"I stood in the parking lot and thought, ‘Wow! This show could be helpful for a lot of people.’”

Who’s the best person to speak on a given topic? That’s who Atlanta broker Michael Bull goes after for his long-running podcast, which both serves his business and helps other brokers and agents improve theirs.

If you think about business development—there’s sales, which is listening and speaking with the intent to convince. Most brokers are pretty good at that,” said Ken Ashley, executive director at Cushman & Wakefield on a recent episode of the podcast “America’s Commercial Real Estate Show.” “Then there’s marketing. And that’s what they think about you before you walk in the room. And, you know, if you get business at your country club, that’s terrific. More power to you. But for a lot of folks in a post-pandemic world, in a Zoom culture, we’re going to have to market ourselves differently.”

Ashley and host Michael Bull, CCIM, CEO of Bull Realty in Atlanta, were discussing the importance of an online presence for commercial agents and brokers. Bull agreed, dubbing commercial real estate “half marketing, half consulting.”

“An analogy could be preparing food,” continued Ashley. “I may think I’m a pretty good cook, but if I compare myself to a chef, I got nothing. Just because you get the chicken cooked, doesn’t mean it’s the best chicken in the world. The way we are talking and the way we are reaching each other is changing. The tools are changing. The apps are changing. That keeps it exciting.”

Ashley counseled those looking to up their social media game to learn from their more media-savvy peers. Brokers can cooperate as well as compete. “I want everyone here to be successful for their family, for their community,” he said. “And there is a lot of business out there that can be had. We’ve just got to put our heads together and go to work.”

Guest Margarita Parkerson, regional advertising sales executive at CoStar, concurred, adding that an online presence for the properties a broker represents is equally important since prospective tenants are less inclined to drive around looking at buildings these days.

“You want to provide the best customer experience for your tenants that are searching,” said Parkerson. “You want to showcase your property in the best light, using some elevated options with Matterports,” a platform for creating 3D models of spaces. “Really give them a clear picture of what their employees are going to experience, or what their clients are going to experience, when they come into your building.”

This analysis of commercial real estate marketing appears in the Sept. 20 episode of “America’s Commercial Real Estate Show,” which Bull launched in 2010. Bull, who has brokered $8 billion in sales across multiple commercial sectors in his 35-year career, initially planned and operated the show as a local Saturday morning radio call-in show. It became a recorded program through a twist of fate. When the broadcasting company, Salem Media, began renovating its studios, the show couldn’t be done live—it had to be recorded. Rather than simply answering callers’ questions, Bull had to plan content and guests for each episode. The new format was significantly more work, but after the first recorded show on commercial loan workouts, Bull knew he had created something special: “I stood in the parking lot and thought, ‘Wow, this show could be really helpful for a lot of people.’”

Bull got to work, recruiting the best and brightest in CRE for the show, along with top economists and real estate analysts. “I ask myself, ‘Who is the best person in this particular area?’” says Bull. “And that’s who we reach out to.”

Listeners loved the show, and it was picked up by 47 stations nationwide. It was also produced as a podcast from the very beginning—a decision that seems prescient now. As the audience for radio declined, Bull transitioned the show to a podcast-exclusive format that now includes video filmed in Bull’s own studio. There are new episodes every week that can be found on YouTube, Apple Podcasts, Spotify and the show’s own website. Over the last year, the podcast has been downloaded over 600,000 times.

In an Aug. 8 episode on the office sector, Bull spoke with Doug Ressler, director of business intelligence at Yardi-Matrix. The two agreed there are reasons for optimism, despite the current uncertainty. More workers will return to the office once the job market slows, Bull said. Ressler added, the office sector presents a wealth of opportunities as office buildings diversify, offering retail, housing and even e-commerce options. For investors, Ressler said, “mixed-use gives a better return.”

Bull credits the show with adding to his credibility as a commercial real estate professional. But an even bigger benefit, he says, is what he learns from his guests. “As an agent you know a lot,” he says. “But the experts can show us the bigger picture.”

Based on guests’ comments and his own observations, Bull says the slowdown in transactions and sales volume that started in 2022 will carry over into 2023. However, he sees this slower pace as an opportunity. “I’ve been through a down market before—and I’ve succeeded,” says Bull. “A slower market is the time to work on training, prospecting, business development, negotiating. It’s the time to hone your skills.” 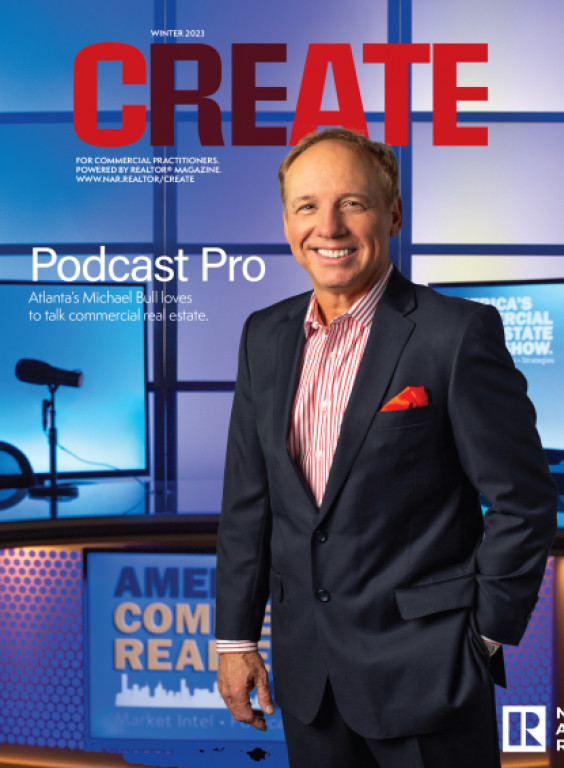 “Everybody thinks when it’s time for creativity, we need to invent something new. We need to just take advantage of things that are already out there. I think that’s what this market calls for: People who will take risks, do things differently. If you’re willing to do something differently, you’re probably going to get a better outcome.”

A Gift to You

Every year around the holidays, Michael Bull records an episode he calls his “gift” to commercial agents and brokers—an episode that focuses exclusively on commercial entrepreneurs and salespeople. In his 2022 show, released last January, his number one tip for 2022 was to treat everyone fairly. “Our goal when we’re working on transactions is to treat everyone the way we’d want to be treated,” said Bull. “And that can help you make the right decisions.”

The show isn’t the only place where agents can learn from Bull’s experience. At commercialagentsuccess.com, Bull provides strategies for agents to be successful in any market. For example, in his video “Closing the Bid-Ask Gap,” Bull recommends never asking potential sellers what they want for their property. It’s the wrong question since it’s potentially not tied to value. You may be placing a chip on their shoulder you have to knock off later. Rather than asking what they want, ask if they have had a “recent analysis with comps and underwriting to see what the property might bring if properly marketed.”

Find out by subscribing to the podcast or the show’s newsletter!