It’s noon on an April Friday, a light drizzle is turning to a more insistent shower, but still the lines at the food trucks grow longer by the minute: Lunchtime in Seattle’s South Lake Union, the high-tech Brigadoon that has sprung up around Amazon since the behemoth online retailer brought its burgeoning workforce to an area once characterized by warehouses and car lots.

The 20- and early 30-somethings (no one looks over 35) in these lines are the reason Amazon and a rapidly growing number of other tech companies are accreting in the city’s densest neighborhoods. These millennials — born between 1982 and 2003 — love being in a hive of activity. “For me, being in an urban area is more appealing,” said Brian O’Shea, who was taking a break from a tech training program to grab Asian food from the Djung truck. “I mean, how much time do I have? I like being in an area where I can walk to restaurants, the grocery, to a movie. If you have to go farther, transit access is easy, or you can grab a cheap Uber. I don’t know if it’s a generational thing, but I know a lot of people my age who don’t want to live out somewhere and have a long commute in. They want to be someplace like this.”

“We could have built a suburban campus. I think it would have been the wrong decision,” said Amazon CEO Jeff Bezos at the company’s annual shareholders’ meeting last May. The talented young workers Amazon recruits “appreciate the energy and dynamism of an urban environment,” he added. The decision to depart from the office park setting where the company began, alongside first-wave tech companies like Microsoft, struck some as novel and bold, but today such moves are becoming commonplace. In April, for example, Expedia announced it would move its headquarters and an eventual 4,500 workers from suburban Bellevue — where city leaders are themselves working to make the downtown more vibrant and walkable — to a site three miles from Seattle’s central waterfront. At a news conference with Seattle Mayor Ed Murray, CEO Dara Khosrowshahi said the location “will be a magnet for top talent.”

And now other industries outside of technology companies are beginning to follow suit. Last August, officials at Weyerhaeuser — a global forest products company and real estate trust — announced its intention to relocate from a 430-acre campus in suburban Federal Way to downtown Seattle. “Moving our headquarters to Seattle will give us access to a larger talent pool to meet future recruiting needs, not just in this region, but from across the country,” CEO Doyle R. Simons said in a statement.

While this trend is blindingly obvious in Seattle, it also is picking up steam in metro areas across the country. Atlanta, the 1990s poster child of suburban hypergrowth, has seen a spate of recent announcements. NCR — a leading maker of ATMs, barcode scanners and related equipment and software — announced a move from office park digs in Gwinnett County to an urban home near Georgia Tech’s innovation hub. The Coca-Cola Company moved its IT center downtown, because managers “see this as a big opportunity to attract and retain the best talent,” the company said in a statement.

Atlanta also is one of three cities with rail systems chosen by State Farm insurance to be home to new, transit-served office hubs. The other two metros are Phoenix, where State Farm will set up around light rail in the suburb of Tempe, and Dallas, where suburban Richardson will see office buildings sprout at its light rail station. In March, Marriott hotels CEO Arne M. Sorenson said his company would begin searching for a new home after many years in an office park in the Washington, D.C. suburb of Bethesda, Md. “I think it’s essential we be accessible to Metro [rail] and that limits the options,” he said in remarks reported in the Washington Post. “I think as with many other things, our younger folks are more inclined to be Metro-accessible and more urban. That doesn’t necessarily mean we will move to downtown Washington, but we will move someplace.”

As the State Farm and Marriott examples show, companies are not so much giving up on suburban locations as they are eschewing the single-use, somewhat isolated office parks, reachable only by car — and apparently disdained by talented young workers. These employers don’t necessarily want the central business district, but they do want “vibrant centers.” These are live-work-play, mixed-use environments, preferably with high-capacity transit, such as rail or rapid bus, said Emil Malizia, a professor of planning and economic development at the University of North Carolina at Chapel Hill. They can take the form of newly created mixed-use developments, or more often than not, the rediscovery and revitalization of pre-existing Main Streets in the small towns on the outskirts of larger cities. Malizia documented the trend in a recent study for NAIOP, the Commercial Real Estate Development Association, in which he examined both the location preferences of employers and the comparative performance of office properties in single-use and “vibrant center” settings.

“For my research I surveyed 130 commercial real estate brokers from large firms, such as Cushman & Wakefield,” Malizia said. “More than 80 percent said that, among the clients they’ve worked with in the last three years, these vibrant places were more desirable to tenants. We also found they have higher rents, lower vacancies and higher absorption rates.”

As he continues to track the trend, he said, it appears to be growing even stronger. “What I have learned from the interviews is there is a very strong assumption — and it is backed up by research from Pew and others — that educated young workers prefer urban settings. And companies are getting that message.”

Given that over 75 percent of the nation’s office inventory is in conventional suburban settings, and that the millennials are the largest generation in U.S. history, these trends could be world changing for the commercial real estate sector, he added.

That realization is not lost on Henry Bernstein, who focuses on finding space for tech companies as senior vice president of Scheer Partners in Rockville, Md., after many years as an economic development official in Montgomery County, Md., a suburb of Washington, D.C. “My son is a typical 25-year-old, working for a tech company. One day he left his car in my driveway and asked me to get rid of it for him,” Bernstein said. He spends a lot of time thinking about how suburban communities can compete in the shifting marketplace. One thing he is sure is not the answer: “Clinging to your single-use zoning from the 1980s will just stifle what private developers are ready and able to do to build the live-work-play neighborhoods that will keep you in business.”

“Not every place can have high-capacity transit,” he acknowledges, while insisting that suburban jurisdictions that do find themselves thus blessed are “insane” not to capitalize on it by encouraging mixed-use districts. “But you can have flexible zoning and development regulations.”

He points to Downtown Crown in Gaithersburg, Md., as a successful suburban development that created an urban zone now popular with 20- and 30-somethings. The development’s online marketing pitch certainly has the lingo down: “Downtown Crown is vibrant and multifaceted. This city-inspired neighborhood offers places to shop, dine and gather as a community, as well as places to call home. Walk to the 24-hour market, hit the gym, browse shops and enjoy a variety of restaurants.”

“The hopeful side of this work is that the market seems to be rewarding what people have decided is good urban practice,” Malizia said. For that reason and others, he added, the trend might have staying power even as millennials age.

In the meantime, the youth-driven dynamic still has plenty of room to grow. “Forty percent of millennials are recent grads living with their parents in the suburbs right now, but many of them want urban. The reason it is a real viable choice, and might not go away as they marry off, as this generation values access more than possession.

If you’re into possession, you need a big house to store all your stuff. Urban gives you access.”

Waiting for his lunch among the food-truck throng in Seattle’s Amazonia, Chris Iverson, 31, offered a more practical reason for staying close to urban job centers. “For a lot of different reasons, people tend to change jobs more frequently these days,” he said. “You want to be in a place where there are other options if the one you have ends or doesn’t work out; or something better comes along. The density gives people a comfort level that they can find something else without moving away.”

As for what his generation will do in the future? “I don’t know whether it will last. My parents moved to the suburbs because everyone else was doing it. Will we do the same thing? I certainly don’t think everyone will. But then I couldn’t say for sure.”

David A. Goldberg is the communications director for Transportation for America, a nationwide coali-tion based in Washington, D.C., that advocates for transportation policy reform. In 2002, Mr. Goldberg was awarded a Loeb Fellowship at Harvard Univer-sity, where he studied urban policy. 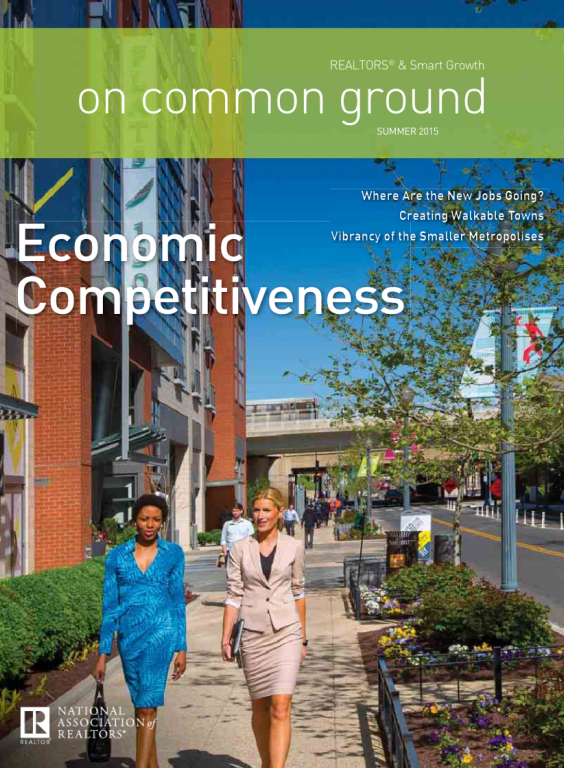 Where Are the New Jobs Going?