Who Should Run the Agent Ratings?

REALTOR® associations generally steer clear of promoting one member over another. Most association programs and services keep the playing field level. Online membership lists are in alphabetical order, and “Find a REALTOR®” functions rarely stray from offering just designation, specialty, and language options to narrow the search for consumers.

So while associations may be happy to stand on the sidelines of the ratings battle, more are being dragged into the fray. Members are either talking about association-sponsored rating systems they believe could be more neutral, fair, and member-centric—as is the association norm—or asking the associations to intervene on their behalf against rating sites believed to be unjust.

“Just last week, I received a frantic e-mail from an office manager at one of our largest firms,” says Kathy Roberts, RCE, AE of the Sarasota Association of REALTORS®, Fla. “One of her agents sent her a link to a rating on [a listing site] that she was extremely upset about. It was using data it had from an unknown source to rate her, and the results painted her in a bad light.”

Unfortunately, there’s very little associations can do to help agents who believe they’ve been wrongly rated. Although some MLSs decline to share data on sold properties or other facts that are often used to rank members, the only defense is a good offense, AEs say. Educating members on how the rating systems work or advising them on alternative methods of promotion are currently hot classroom topics at REALTOR® associations nationwide.

Can there be a “fair” ranking program?

“Pleasing everyone, or most everyone, with a rating system would be very difficult,” says Jeanette Newton, RCE, CEO, Dulles Area Association of REALTORS® Inc.,Va. “Would it be volume-based, activity-based, referral-based? There are so many factors that go into selecting the right agent.”

Sites that do review and rate agents, such as Zillow, Trulia, or Yelp, rely on whatever information they can get to formulate unique rating criteria. Ratings can include feedback from clients, days a home sat on the market, list price-to-sale price ratios, agents’ years of experience, how many homes sold, and a wide range of public data. Then, add the opportunities for agents to purchase ranking “enhancements” or “placements,” and have friends and family write glowing endorsements, and it is no wonder REALTORS® are dismayed with the current rating site offerings.

“For a program to succeed in rating or ranking agent production, you would have to first standardize data feeds so that you’re gathering consistent and accurate information on everyone,” says Lisa Noon, RCE, CAE, CEO of the Oklahoma Association of REALTORS®. “Some REALTORS® work as individuals, some work in teams, and others are teams where production is all given to the team leader. The question then is how to extrapolate quality service or production from different business models. Then we must ask ourselves, is production the only parameter for success?”

Indeed, as seen in realtor.com®’s controversial Agent-Match beta test, metrics such as days on market or list price-to-sale price ratio, “while useful within a real estate brokerage, could be confusing or even misleading to consumers,” said Errol Samuelson, chief strategy officer of Move Inc., which operates realtor.com®. “Numbers don’t lie, but they don’t necessarily tell the whole story, either.” Realtor.com® expects to release a retooled agent finder in 2014.

Although disagreement on how to best rank or rate REALTORS® remains, sites that do so aren’t going away. From HomeLight and Mountains of Agents to Brokur and Stik, the number of startups aiming to match home buyers and sellers with agents skyrocketed in the past few years. And all—like the home listing sites before them—are striving to profit from claiming a space between the REALTOR® and the consumer.

Currently, no single player dominates the agent rating space—which industry analysts say is still ­nascent—creating an opportunity for anyone’s entry. So now, in addition to the question of how to rate agents, there’s the question of who should rate agents.

Leave ratings to the brokerages?

“Agent ratings should be a broker option, and it would be best done outside of the association,” says Newton. “This is a perfect example of ‘leveling the playing field’ that our brokers would not be pleased about.”
Many large national brokerages, including ZipRealty and Redfin, already have their own review platforms for agents.

ZipRealty’s opt-in system posts the unedited reviews from all the agents’ clients while giving the agent the opportunity to respond to the review to clarify or explain. The brokerage says 9 out of 10 agents participate in the platform. Redfin, likewise, says it not only surveys every client—whether a deal closes or not—and posts all the reviews, but it pays its real estate agents based on those reviews.

As an alternative to a brokerage—or an association—building its own review platform, there’s a growing list of third-party customer satisfaction and service measurement companies, including RealSatisfied and Quality Service Certified, which both specialize in the real estate market.

Quality Service Certified currently partners with several REALTOR® associations in a NATIONAL ASSOCIATION OF REALTORS®-sponsored beta test of member ratings called the REALTOR® Excellence Program. More generalized customer satisfaction software that any entity can customize is available from companies such as Customer Thermometer and Hively.

Leave ratings to the agents?

Agents are arguably the most motivated to build and manage their professional reputation. Glowing client endorsements that agents post on their own Web sites are still a powerful sales tool, and agents increasingly are using new technologies to boost the number of testimonials and credibility of the positive feedback they receive.

Services such as Stik, an online reputation management platform (for all types of professionals), offer agents a way to solicit endorsements from clients and friends for posting across social media sites. The reviews are linked to authors’ Facebook or LinkedIn accounts to establish credibility. ­Similarly at Trulia, agents can add endorsements from Facebook friends to their profile, and at realtor.com®, agents can add client recommendations (garnered through a RealSatisfied survey) to their profile.

Leave ratings to the association or MLS?

The Houston Association of REALTORS® has run a popular agent rating system since 2009. Key to its success, say Bob Hale, HAR’s CEO, are its opt-in element and the option for agents to make their reviews public or not.

At the Sarasota association, members can participate in the REALTOR® Excellence Program offered through the My Florida Regional MLS. “I think the REP program really fills a need,” says Roberts, “and I don’t understand the reluctance of the brokers to use it.” Florida broker participation in the REP has been low.

Roberts says the ideal rating tool would have association involvement in development, but data gathering done by a third-party business partner. “Credibility is the most important element in agent ratings, and you need that third-party relationship to show it.”
In January, the small Pinehurst-Southern Pines Area Association of REALTORS®, N.C., became the first REALTOR® association to sign onto the RealSatisfied platform, which integrates with its MLS to automatically send customer surveys. Members can choose to use client feedback in their marketing, but AE Paula Nash said the program is for members to learn from their client’s feedback.

Although her members in Oklahoma have not pushed the idea of an association-run rating system, Noon says associations could be best positioned to manage them. “My impression is that programs overseen from within the organization are more readily accepted not only by members but also by the public. Anytime that we can create programs that take into account our members’ opinions and insight, we’re going to have a much better chance of success,” she says.

Who will claim the ratings space and how agents will be rated are questions associations, brokers, agents, and others will continue to ask themselves. 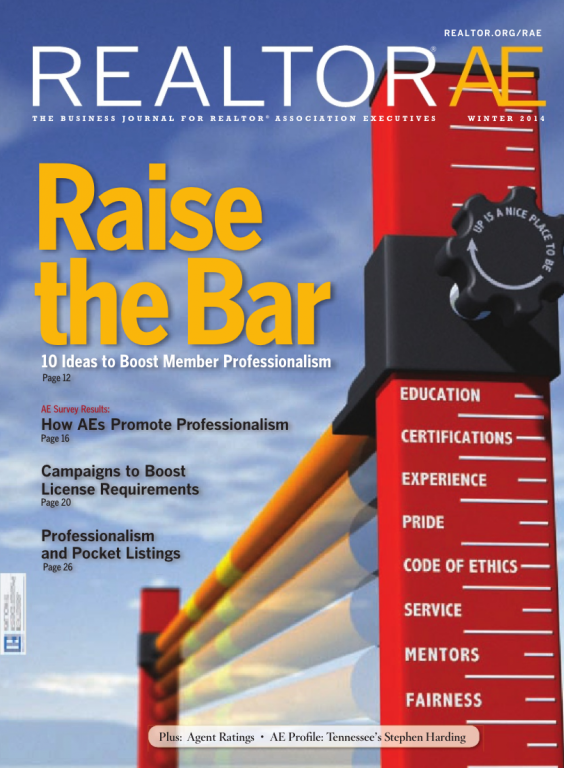 Small Board: Where Professionalism Becomes Personal