Good relationships between AEs, staff, and volunteer leaders are the key to helping associations flourish.

Strong, sustainable relationships propel REALTOR® associations forward, but the bonds between staff and volunteer leaders can’t be left to chance. That’s the consensus of AEs representing a variety of local and state associations. The duty of AEs is to build cultures of trust and communication in which volunteers and staff can work together for the good of the organization.

Working with volunteer leaders “keeps the job fresh,” says Washington REALTORS® CEO Steve Francks. “I love my job, [and] a big part of it is the people I get to work with. When it’s clicking and we’re sharing ideas and recognizing each other’s strengths and supporting each other, it’s really fun. This is fun.”

The voices of volunteer leaders drive strategic plans that define association goals—“what makes them more effective in their communities, what helps them serve their clients better, and what makes buying a house or selling a house a good experience,” says Mississippi Association of REALTORS® CEO Beth Hansen. “Our staff job is to support those goals.”

Leadership training defines the roles of association volunteers and establishes expectations for their participation. In Washington state, programs spool out year-round to instill a shared understanding of the association’s purpose and create “a culture of partnership and trust and mutual respect at every level,” Francks says.

The Northeast Louisiana Association of REALTORS® uses a “leadership ladder” to train volunteers for the next level before they take a new office. Passing the baton like this can help forward-looking initiatives. “Your hope is that you can help the one who’s in now join ideas with the one who’s coming up behind, so you will have a consistent legacy,” says CEO Alice Clark, RCE.

In recent years, the Northern Virginia Association of REALTORS® has expanded its roster of advisory groups and forums while also attracting fresh perspectives by trimming volunteers’ terms in office from lifetime to a single year.

“We took a philosophical approach that everybody who applies gets a spot somewhere,” says CEO Ryan McLaughlin. “It’s getting harder now that we’re getting more applicants, but we’re making it happen.”

Once you have good volunteer leaders, how do you keep them engaged? By communicating clearly and consistently, creating well-defined roles for volunteer leaders and staff alike, and aligning everyone and their ideas with the association’s strategic plan.

“We try to start early to create an atmosphere that we are all working together,” McLaughlin says. “Our leadership team is constantly communicating. We’re starting that communication very early and doing it often, so by the time the secretary-treasurer works their way up to president, we’re all a team, and we can trust each other.”

Occasionally, leaders clash. AEs should be flexible and level-headed and present a unified front with top volunteer leaders to demonstrate support for board decisions. “You have to do everything according to what’s in the best interest of the general membership,” Westrum says.

At NVAR, a culture of open dialogue and trust lets leaders know that “it’s OK to share opinions and have conflict, knowing that we’re going to come around to a consensus,” McLaughlin says. Expectations of volunteers and staff are baked into NVAR training. Responsibility is assigned according to association management guru Bob Harris’ mantra: “Boards govern, staff manages.”

Westrum doesn’t just resolve conflicts; she also ferrets out the underlying issues. When NVAR triggered backlash from members after endorsing candidates in a city council election, for example, she learned that it wasn’t the endorsements that members minded. They simply feared that releasing endorsements publicly would drive a wedge between them and their clients.

Preventing conflict demands meticulous documentation. “People have different memories of things, and part of our role as staff is to keep track of that,” Westrum says. “It helps the board continue to see things factually and make better decisions. We make sure they have all the information they need when they’re making decisions, so they’re not just relying on hearsay or someone’s memory from two years ago.”

When money is at stake, trust is paramount. “There’s nothing that will derail an association from its key goals of serving its members and having a strategic plan faster than having to stop everything and deal with financial issues,” says Elizabeth Breen, AE, Santa Ynez Valley Association of REALTORS® in California.

AEs should take the lead in ensuring financial trust, she says. Recognize that volunteer leaders have a fiduciary responsibility to their associations but often need training in reading financial statements and spotting anomalies. “When you overshare and when you overcoach, it builds a huge amount of trust,” Breen says.

Breen’s treasurer reviews the association’s financial report with her before board meetings and then gives the report to the board. This gives board members “confidence that your treasurer is paying attention to the financials,” she says.

Clark became AE of NLAR at a critical nadir in leaders’ financial trust: A previous AE had embezzled from the association’s accounts. “They were at the point of getting the lights turned off,” she says. In the wake of the incident, the association developed strict financial policies with guidance from legal counsel and National Association of REALTORS® models.

Rebuilding trust takes time, adherence to protocols, and “being an open book to the executive committee,” Clark says. “My actions laid the foundation for them to be able to trust me for 10 years now. Everyone—especially in leadership—has to know what the financial policy is.”

At the Mississippi Association of REALTORS®, an operations committee oversees financial issues, Hansen says. The CFO prepares the budget and reviews it with the committee “so they understand where the money is going and [where] income is anticipated,” she says.

If there are budget changes to present to the board, the committee is brought into the discussion. “We want that examination and want it to be transparent,” she says. “It’s their association. We want them to be comfortable with how money is being spent to accomplish the goals of the association.”

“If your revenues are lower than expected, for example, what is the reason?” he asks. “Can we correct any problems or do things differently going forward?”

Overcommunicating to eliminate ambiguity helps build trust that carries into all aspects of the AE’s job, says Breen. “They look at you and think, ‘That’s an honest, trustworthy person who is a professional,’” she says. Once that’s established, “You have the ability, perhaps, to have more power in other areas.”

And trusting relationships with volunteer leaders make for stronger associations, AEs agree. Hansen notes that she is not a real estate licensee and has never shown a home or written a contract, so she depends on her members to share ideas and provide feedback about how the association is doing.

“They are gifting us with their time and their skills and their abilities,” she says. “That is such a wonderful asset to have. You do what you can to preserve their involvement and direct them in ways that are beneficial to the association.” 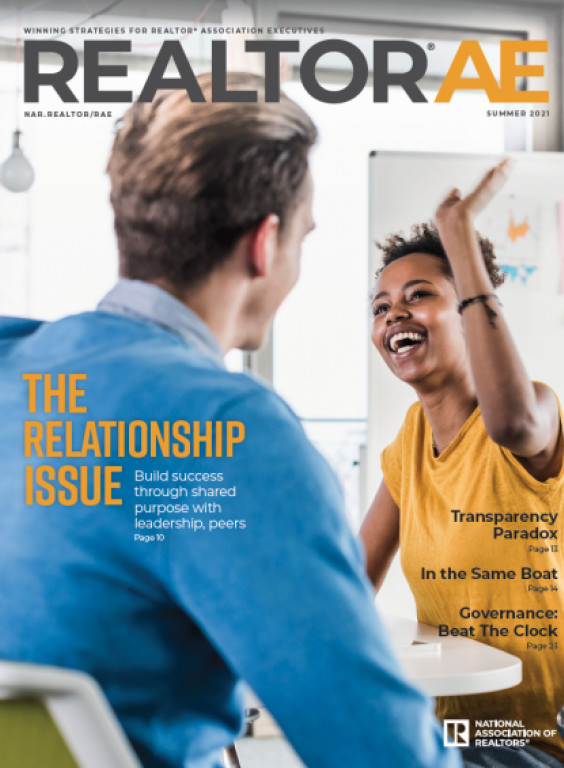