My REALTOR® Party: Year of Accomplishments 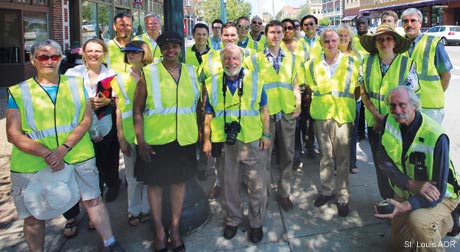 “The goal is to make every REALTOR® association across America a campaign headquarters for home ownership and private property rights.” Those words from Dale Stinton, CEO, of the NATIONAL ASSOCIATION OF REALTORS® may sound like a tall order, but the REALTOR® Party Initiative made significant progress in doing just that in its first year of operation.

In 2012, nearly 550 state and local REALTOR® associations used nearly 3,000 resources offered by NAR through the REALTOR® Party Initiative—all of them designed to leverage the REALTOR® organization’s greatest asset: its members.

“Never before have we touched so many members in so many cities and states with NAR community outreach and advocacy resources,” Stinton says. “Now we’ve got to build on that in 2013 and 2014.”

“There’s something for everyone here,” says Bill Malkasian, NAR’s vice president for political strategic planning. “Associations that are good at mobilizing members will find the professional campaign services and campaign funding to be especially useful. Associations with limited staff and resources may want to start small with a housing-opportunity or smart-growth program grant.”

At the Web site (realtorparty.realtor), REALTOR® associations can learn about what other associations are doing (see “Success Stories” below), apply for funding, download resources, and browse turnkey implementation tools for a wide variety of programs. A REALTOR® Party Association Resource Guide, available at the site, briefly describes each resource and provides follow-up details for more information.

In addition, a Game Changer category invites associations to submit their own ideas for consideration and funding in an annual competition for the best ideas in: community outreach, RPAC fund-raising, advocacy, and building REALTOR® Party strength.

From the very beginning, developers of the REALTOR® Party Initiative made it their mission to make distribution of resources transparent to all members. The REALTOR® Party Tracker takes care of that. Associations and REALTORS® alike can log onto the tracker to search by program, by state, or by local association to see who has used what resources.

“This makes it easy to see that two-thirds of the dues dollars devoted to the initiative are truly getting back for state and local associations to use in their own advocacy and community involvement programming,” explains Walt Witek, NAR’s senior vice president of community and political affairs, who oversees the REALTOR® Party Initiative.

“In 2012 we gave out 132 housing-opportunity, diversity, and smart-growth grants; we did 59 campaign polls, 52 Issues Mobilization Grants, and 242 Independent Expenditure races in 38 states; and we raised more than $7 million in RPAC receipts—up 17 percent from last year,” says Witek.

“The essence of the REALTOR® Party Initiative is partnership, cooperation, and real-life assistance,” Witek notes. “And we’ve got the professional staff and consultants to help associations every step of the way.”

A skilled team of consultants is available to help associations apply for, incorporate, and execute anything from a community involvement grant to an issue or candidate campaign. The consultants, who are each assigned to a group of states, connect state and local associations to the professional program staff in Washington, D.C., who actually administer the resources and tools.

“The consultants are really an extension of your staff,” Malkasian explains. “Each one of them has comprehensive experience working with and for REALTOR® associations. They provide day-to-day assistance for each and every program and really, you can call them anytime. They are there for you,” Malkasian promises.

In looking over the many REALTOR® Party success stories from last year—more than 50 of them are posted at the Web site (realtorparty.realtor)—Malkasian notes, “We saw that strong partnerships and good communication between the state and local associations was critical.”

When the state association takes a strong role in coordinating and supporting local association efforts, there are better results, he explains. In many of the most successful Issues Mobilization and Independent Expenditure Campaigns conducted at the local level, the state association provided funding in addition to resources NAR provided.

The REALTOR® Party Initiative combines new programs with some of the tried-and-true ones for a new focus: to help REALTORS® direct their advocacy activity to the public, in addition to the members.

“Associations are pretty good at raising RPAC funds, getting their members to the polls, and encouraging members to vote for REALTOR® champions and issues. It’s new for many of them to ask the public to vote a certain way,” Malkasian says.

“As the REALTOR® Party Initiative moves into its second year, our goal is to help associations get even better at educating the public about our issues. And we want associations that have never used the resources to stick their toes in the water,” he adds.

The new Campaign Training Academies are designed to teach AEs and their government affairs directors how to best take advantage of all of the campaign services offered through the REALTOR® Party Initiative.

John Wuo, the Arcadia Association of REALTORS®, Calif., champion, was a candidate who seemed to have it all: a successful and well-rounded business career; a thriving real estate office; a list of impressive board memberships and volunteer activities longer than his arm; two terms on the Arcadia City Council (including two terms as mayor) under his belt; and the ability to speak Mandarin—the native language of the city’s largest minority group.

But he had no Internet presence. The Arcadia REALTORS® put an end to that. Using NAR’s Campaign Services, they executed a successful campaign using English- and Chinese-language ads on Facebook to help elect him to another term.

The 2012 election cycle resulted in a resounding victory for the Oregon Association of REALTORS® as voters supported the passage of Ballot Measure 79 to prohibit real estate transfer taxes. The vote was the culmination of a two-year campaign with NAR that began by collecting 164,000 signatures to qualify the issue for the ballot.

Despite a difficult political atmosphere, research showed a path to victory through a strong education campaign. This impressive victory featured a strong REALTOR® mobilization effort and a targeted campaign that personalized the messages necessary to illustrate the negative impact a real estate transfer tax would have on home owners.

The Ada County Association of REALTORS®, Idaho, first used an NAR Ira Gribin Grant to develop a three-pronged housing assistance program it called Welcome Home Idaho, providing down payment assistance for working families, zero-percent loans to help with fees and interest, and employer-assisted housing materials and training for the community’s REALTORS®, elected officials, and business leaders. Then it put on a housing summit, launched a fair housing campaign, and established a housing trust fund for lower-income home buyers.

REALTORS® in Michigan Create “Sense of Place” in Workforce Housing

When the Michigan Association of REALTORS® received an Ira Gribin Grant from NAR, it funded a statewide initiative to study the benefits of placemaking—a progressive movement that creates improved and distinctive public spaces with community input.

Career: Prove Your Worth