As I prepare to close this chapter as chair of the 2015 Association Executive Committee, I’d like to share a little bit about how I got to where I am today.

My story doesn’t exist without Robert F. Ferguson, who loyally served as executive vice president of the New Jersey Association of REALTORS® for more than 40 years. When he approached me to work in the government affairs department, our first meeting was supposed to last only a few minutes. Hours later, I was sold. His attention and focus on my career goals didn’t stop after that first meeting. Instead, they grew.

I’m not sure I can adequately express how important it was for me to have a strong mentor as I moved up through the association. I had someone who was there to teach me skills for situations no classroom could dream up and someone to tell me when I did something wrong and allow me to find a way to fix it. He was a strong leader, someone who put it all out there for the greater good. He gained loyal followers like me because he proved, time and again, that his leadership was effective and unmatched.

I set out to be the version of myself that Ferg believed in. It’s a task I aim to live up to every day. I understand the gift he gave me as a mentor, and, just as I encourage my staff to do, I urge you to take on your leadership role with great pride and responsibility. Your effect on those around you—colleagues and coworkers—can be considerable. Remember that your leadership in times of hardship can often define your style, and your leadership in the best of times can define your approachability. Understand that everyone around you has goals and aspirations that are different and unique and worthy to them.

Ferg passed away Jan. 12, 2010. Not a day goes by that I don’t think about him or wish I had the opportunity to talk to him one more time. I think he would agree with this last piece of advice: Aim to lead not only your membership but those within your association to great, valuable careers they are proud of.

It has been an honor to serve with the NAR Leadership Team led by President Chris Polychron. I wish our incoming AE chairman, Marc Lebowitz, and incoming vice chairman, Mike Theo, the best of luck in 2016. I’d like to extend a sincere thank you to Steve Franks who served as the AEC liaison to the Executive Committee. To all the staff at NAR, especially the Leadership Team liaison to the AEC, Stephanie Walker, your hard work does not go unnoticed. 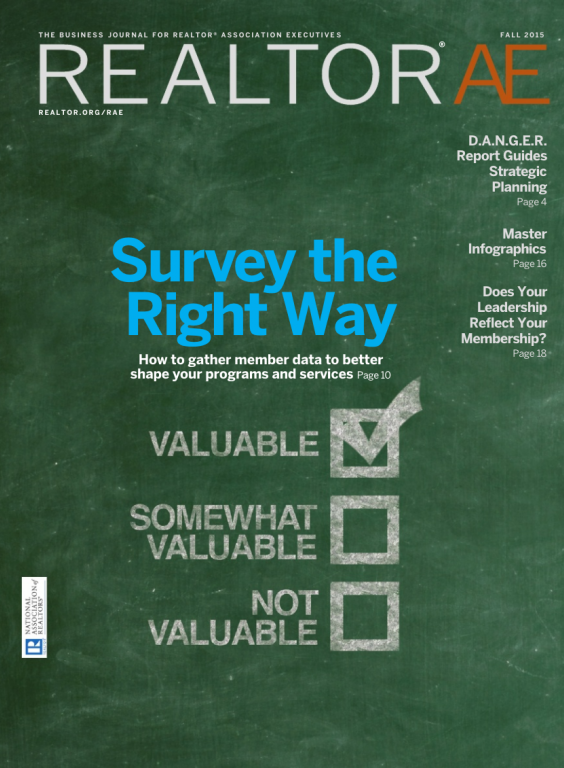 Fall 2015: Embracing the Value of Change