It’s Better With Video: Top 5 Ways to Use Video at Your Association

Does a day go by when you don’t view video content? Probably not. Whether it’s a TED Talk for motivation, a quick YouTube tutorial, or a news clip on Twitter, we’re surrounded by video in the office and at home. This is why more REALTOR® associations are incorporating video content into every facet of association communications, training, and outreach.

But is there real return on investment for video programs?

“We made a video series of testimonials about our leadership program to attract applications, and we got the most applications ever,” says Suzanne Westrum, vice president of communications and marketing at the San Antonio Board of REALTORS®, which has a full-time video producer and an in-house studio.

Westrum also uses video to explain complex advocacy issues that she thinks members might not otherwise take the time to read about. “We just had a call to action about a local issue we’re opposing, and it was hard to explain so we did a video featuring our members—and other footage—to break down the complex issue and get members on board.” The results so far show a large number of views and shares among members.

At the Spokane Association of REALTORS®, Public Affairs Director Tom McArthur says there’s a jump in member engagement whenever he uses videos to communicate. “We made a video to promote our member survey and got a 35% response rate when the survey vendor said we could reasonably expect only 6% to 10%.”

Association results mirror the growth of video in general. The latest video marketing statistics from Social Media Today show that video is the most engaging content type on every social media platform, 72% of people prefer to learn about a product or service through a video, consumption of video content rises by 100% every year, and emails are opened 7% more with the word video in the subject line.

Done right, video content can drive greater response than other communication vehicles, but quality and relevance is the key in today’s video-cluttered digital space.

Not every message makes a good video

“Video used to be difficult to do and do well. That’s just not the case anymore,” says Eric Berman, RCE, former communications director for the Massachusetts Association of REALTORS®. “My kids can edit videos on their phones. There’s a lower bar to entry for everybody.” But, he cautions, don’t make a video just for the sake of it. “You have to have a good reason to do it,” he says. “And if you’re going to do it, you have to think about it before you hit ‘record.’”

The Massachusetts Associations’ most-viewed videos are its monthly housing data animations, RPAC testimonials, and commemorative REALTOR® of the Year videos, but Berman says MAR has turned away from video in some instances in favor of audio podcasts because people will listen to longform media more readily than they will watch it.

The Pennsylvania Association of REALTORS® also has scaled back video production recently.

“In our first year of having an in-house studio and a full-time videographer on staff, we produced over 100 pieces of video content,” says Kevin Juliano, the association’s digital director. “We learned a lot and now have a more thought-out process for video production and a dedication to quality content over quantity. We struggle with members saying, ‘Oh, just create a one-minute video on that.’ What we need to ask ourselves is whether it’s something that truly needs a video.”

“When we first began doing video, the thought was, ‘Let’s use video for everything in the world and put everything out there.’ We were streaming a lot of programs, which involved a lot of staff time, and people weren’t sitting and watching the whole thing,” says Gutkin. Every association class and event did not make for compelling video, she realized, so she decided to take a more strategic approach and focus on the issues and programs that were the most significant.

“One thing we’re going to do this year is take longer videos and break them down into micro-learning opportunities to get out more bite-size information that members can consume when they have a few minutes,” says Gutkin. Another new video initiative is filming a committee chair or co-chair directly after a meeting when there’s something important to share with members. These quick recap videos get members talking about the latest things that volunteers are working on or the latest real estate–related legal cases. “We often video our board president or sometimes our CEO if there’s a really compelling issue that we want people to pay attention to.”

If you don’t have a library of your own videos to share with members yet, you can share videos from the National Association of REALTORS®’ YouTube channel, including news, legal and market updates, business tips from REALTOR® Magazine, advocacy, events, and more.

What videos should associations make?

Although every association is different, association communications directors say there are five core types of videos that resonate well with REALTORS®.

You have just a few seconds to grab your members’ attention and deliver an enticing message that encourages them to act. In fact, according to research by Visible Measures, 20% of your viewers will click away from a video in 10 seconds or less. This means you should skip the intro music and opening scene, and make those first 10 seconds matter by asking viewers to take action, whether it’s clicking to register for an event, volunteer for a committee, or sign up for a class. Try sparking your audience’s curiosity by asking questions (“Have you signed up for the best real estate event of the year yet?”) and using teasers (“You’ll never guess what happened in the metro area real estate market in March”) to hook their attention right away. Videos that are 15 seconds or shorter are shared 37% more often than those that last between 30 seconds and 1 minute.

Issued on a regular schedule to boost anticipation, housing data videos are a member and media favorite. Because data—particularly reading data—can be boring, many REALTOR® associations have turned to easy-to-use animation software (PowToons, Blender, OpenToonz, Stykz) to liven up and better illustrate the numbers.

Complex topics are most relatable and more quickly grasped when explained by someone in a video. Although audiences tune out after two minutes on average, that’s more than enough time to relay the essentials of legal or legislative issues and point members to either a longer video or article on your website. Washington REALTORS® produces 60 to 80 videos per year, and about 90% of the video content features the association’s legal hotline lawyer, says Steve Klaniecki, the association’s director of communications and marketing. “They are not art, usually a talking head with titles, [but] our members love them, and member offices and local associations are using them in group meetings.”

When a new and complicated state tax rule hit Pennsylvania, REALTORS® inundated their state association with questions. “We had our CEO [Mike McGee] sit down with the state secretary for a video interview,” says Juliano. “Even though it was a very dry interview—that we tried to help with some B-roll and snazzy sound effects—it turned out to be one of the most trafficked videos for us because it answered members’ questions.”

Watch another example video: Greater Metropolitan Association of REALTORS®’ “Why REALTORS® Should Invest in RPAC,”

Messages coming from fellow members are more authentic and have a greater effect than those that come from staff, says Gutkin. “The members in the videos share them on their social accounts widely so they get a lot of extra traction that way.” This is the power of REALTOR® testimonials to convince members to contribute to RPAC, attend an event, volunteer their time, or participate in advocacy. During your events, record member testimonials on a range of topics to use in future promotions.

Nothing builds engagement—and a sense of getting value for dues dollars spent—than business tips and advice members can use right away to boost their bottom line. “When we brainstorm about how we can better develop content, we try to hit those high-level topics members want, such as how does this keep me out of jail, how does this help my clients sell their house faster or buy a house quick, and how does this ultimately help my business’s bottom line,” says Juliano. “These are the things that get the biggest interaction.”

A regular series of video tips on listing, technology, negotiating, staging, or even small-business accounting presented in 5- to 10-minute videos from fellow members or staff can create a loyal following. 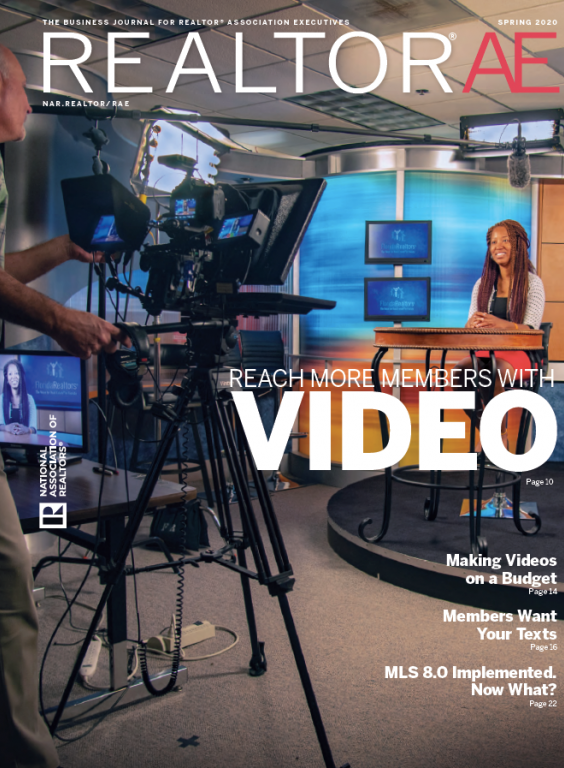