REALTOR® associations are successfully nurturing relationships with local and state officials regardless of limits on in-person gatherings.

Policies that affect housing and commercial real estate—taxes, affordability, development fees, zoning—are arguably some of the most impactful in the country. If it involves the built environment, it affects everyone. Unfortunately, “the shelter-in-place limitations imposed in 2020 have complicated
our ability to build and maintain relationships with local elected officials,” says David Stark, government affairs director for the Bay East Association of REALTORS® in Pleasanton, Calif. “We are not able to rally the troops to go to the city commission chambers to testify on an issue, or get together with leaders for one-on-one meetings over a cup of coffee.”

Reaching herd immunity to COVID-19 may bring back shoe-leather advocacy over the next couple of years. In the meantime, associations are relying on alternative avenues to build relationships with elected officials and other policymakers, and to educate them on issues critical to REALTORS®.

As with everything in pandemic life, virtual meetings have become a lifeline.

Covering 68 towns and cities, the REALTOR® Association of Pioneer Valley, Mass., already had its work cut out for it in connecting with all of the local and state representatives involved in setting policy in the region. With in-person meetings curtailed, RAPV launched “Mayoral Minute” Zoom calls to facilitate chats with local leaders. “We ask them what’s going on in their cities and if there are any proposals that might affect homeowners,” says Brendan Bailey, RAPV’s chief of staff and former GAD. “This provides good face-to--face time, even though it’s virtual.”

The association records the sessions and shares them with the participating mayor and members in the area, who in turn use the information to stay on top of the issues and keep clients up to speed. “It’s a great vehicle for helping our members while educating our mayors,” Bailey says.

The exchange of information regarding a policy or proposal is a two-way street. The New Orleans Metropolitan Association of REALTORS®, for example, invites officials to engage with members at quarterly virtual joint sessions of its political coordinators and Government Affairs Committee.

“We invite elected officials to attend virtually and give them a half-hour to speak about what’s going on in their areas,” says Kelli Walker Starrett, senior vice president/director of governmental relations and NAR’s 2020–2021 GAD Institute chair. “We also invite municipal employees, such as building inspectors. It’s easier for them to attend virtually than set up face-to-face meetings.”

One official—the Clerk of Courts for the City of New Orleans—has become a regular resource, even volunteering to lead a 200-strong Zoom meeting on eviction moratoriums. “This is what we’re looking for—a person who’s going to call you when housing issues come up,” Starrett says.

Local officials have been eager to help during the pandemic, she adds, whether it’s recording a video about the importance of REALTORS® or calling to take the pulse on a new proposal. “Usually, we play a lot of defense,” Starrett says. The situation “has really put us in a much better position, because we have been able to be much more proactive with the policy decisions they are making than we had in the past.”

Maryland REALTORS® also schedules virtual meetings with legislators, regulators, and REALTOR® constituents and has invited officials to appear as panelists in webinars on topics such as coronavirus response and racial justice. In March, the association held a Zoom news conference to announce the results of its first State of Maryland Housing survey, inviting officials to review its findings.

“We invited a couple of legislators who are working to address some of the challenges identified in our statewide poll,” says Bill Castelli, senior vice president of government affairs for Maryland REALTORS®. “This gives the legislators and the bills we support some additional exposure. We hope it will encourage legislators to reach out to us, too.”

The Northern Virginia Association of REALTORS® had already established relationships with new and returning supervisors in its largest jurisdiction, Fairfax County, ahead of the pandemic. Since last March, the association and its Public Policy Committee have invited them to multiple virtual meetings and events such as a “Politics & Pancakes Virtual Breakfast” featuring political analyst David Wasserman.

“They appreciate the opportunity to hold meetings with us—even virtual meetings,” says NVAR GAD Josh Veverka. Senior Vice President of Public & Government Affairs Mary Beth Coya notes, ”We are providing our members with information while also giving the elected officials a platform to build relationships with their constituents.”

Although it is a struggle to maintain the personal touch for which REALTORS® are known, association executives say virtual meetings have made it easier to meet with local, state, and federal officials. “It is so much easier to set up Zoom calls than to schedule meetings and build in travel time,” says Danielle Blake, chief of advocacy for the Miami Association of REALTORS® in Florida. “Even big meetings with HUD officials and our representatives in Washington are done virtually,"

The Columbus Board of REALTORS® sent about 20 members to a virtual version of the Georgia Association of REALTORS®’ annual advocacy event, REALTOR® Days at the Dome, in March. Still, AE Lorri Edwards, RCE, EPRO, says she hopes to invite local officials to CBR’s annual luncheon in person soon.

NVAR also took its annual Lobby Day in Richmond virtual this year, avoiding the usual daylong bus trip to the state capital. In addition to Zoom calls, NVAR staff exchange texts with legislators and their staff. “It has become even more prevalent during COVID,” Coya says. “They will text us during a subcommittee or committee meeting if they have questions about a bill or an amendment and want to know our position.”

In addition to facilitating meetings, Maryland REALTORS® sends legislators fact sheets on key issues and uses email and texts to mobilize REALTORS® to contact their representatives and voice their positions on the issues—especially “if a floor vote is imminent,” says CEO Chuck Kasky.

Such grassroots advocacy goes a long way toward making up for the lack of organized, in-person activity, Bay East’s Stark adds. “It’s harder to engage officials talking on the screen, so when we can mobilize our members and consumers, it’s a powerful way to let officials know there are many people who are interested in our issues.” 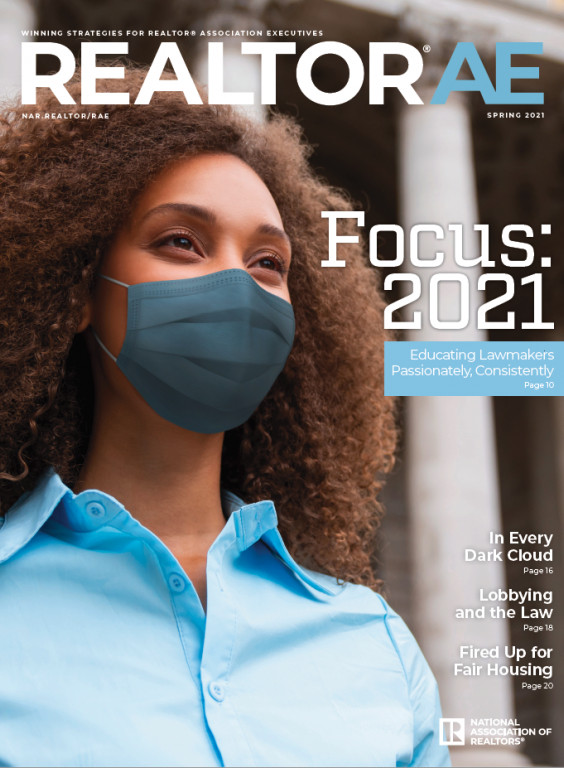