Amplify Your Outreach With Collaborative Events

Imagine 30 percent of your membership engaged in dozens of community outreach activities on the same morning, generating media attention and thousands of social media posts. At my association, the Wilmington Regional Association of REALTORS® in North Carolina, we call that RAD, or REALTOR® Action Day, now in its second year.

Nearly 580 members of the Wilmington association in May joined dozens of members of the neighboring Topsail Island Association of REALTORS® to visit senior centers, plant sea oats to stabilize the beach, rake leaves at parks, install landscaping at community centers, and erect fences at youth centers, among other activities.

"In all my years of membership, this is the best event we've ever done," says Sherri Pickard, association past president.

Beyond the great publicity we received and the good works done, RAD recreated that feeling of membership unity that can get lost in the REALTOR® community. "RAD also builds the REALTOR® brand in light of community service, which helps better position the image of the association in the community and with key decision-makers," says Adrienne Cox, Wilmington's public affairs director.

For years, members have individually participated in community acts and charitable events, and they continue to do so. Yet with the new focus on REALTOR® associations' Core Standards requirement for community outreach, we knew we needed to put the full resources of the association behind an effort that would make a big statement.

Wilmington Mayor Bill Saffo, also a REALTOR®, participated in RAD both years. "This event has had substantial impact in the region," he says. "Beyond the goodwill that has been built up for WRAR the past two years, REALTORS® are increasingly seen as active contributors to the community, neighborhood by neighborhood."

Arlene Miller, AE at the adjacent Topsail Island Association of REALTORS®, says that although the community exposure is great, members participate in RAD because they enjoy it. "It's also been a great way to collaborate with a neighboring association," she says.

A similar multiassociation one-day effort, REALTOR® Care Day, has been underway in central Ohio since 2005, contributing nearly $369,000 in improvements and repairs and hundreds of hours of service.

"It's really something to see how much we can accomplish in one day," says John Royer, 2016 president of the Columbus Board of REALTORS®, Ohio. "But what's really heartwarming is the appreciation from the homeowners as well as the organizations. This is such a rewarding event for everyone involved."

The Charlotte Regional REALTORS® Association's REALTORS® Care Day, like ours, is a one-day event with simultaneous projects. In 2016, the association's ninth annual event attracted nearly 700 members to take part in home improvement projects throughout the area. There's also an annual REALTORS® Care Day sponsored by the North Central Jersey Association of REALTORS®, that will expand to a statewide program in 2017 with the support of the New Jersey Association REALTORS®. The Pennsylvania Association of REALTORS® held its eighth annual Realtors® Reach Out month in October. Nearly 30 local associations sponsored events ranging from food drives to neighborhood clean ups.

RAD has a great payoff but it requires adequate financial resources, association collaboration, and staff hours to run smoothly. We provide project materials, tools, volunteer T-shirts, and the celebration barbecue meal, and this year we had seven business partner sponsors to help foot the bill. In addition, each town in which we planted sea oats donated about $2,000 worth of the plants. We also received an NAR Placemaking Micro-Grant to help fund building a community garden as part of RAD. Plus, we did a special project with our commercial members in which we landscaped the Community Boys & Girls Club, installed a new fence, and then hosted a celebration party with 108 youth members.

In addition to funding, promoting RAD and soliciting volunteers is critical. RAD is scheduled the first Tuesday of April—the usual time slot for weekly real estate office meetings, so it's important for brokers to reschedule for that week. "We also make calls to members and visit dozens of offices to register folks," says Cox. "This is especially important in the first year."

"In year one we mobilized about 20 percent of membership," says Pickard. "This year we moved 30 percent into the field, and our goal is 40 percent in 2017."

REALTOR® Action Day is a scalable program that any local REALTOR® association can launch. Contact me at shane@wrar.com for a free planning kit. 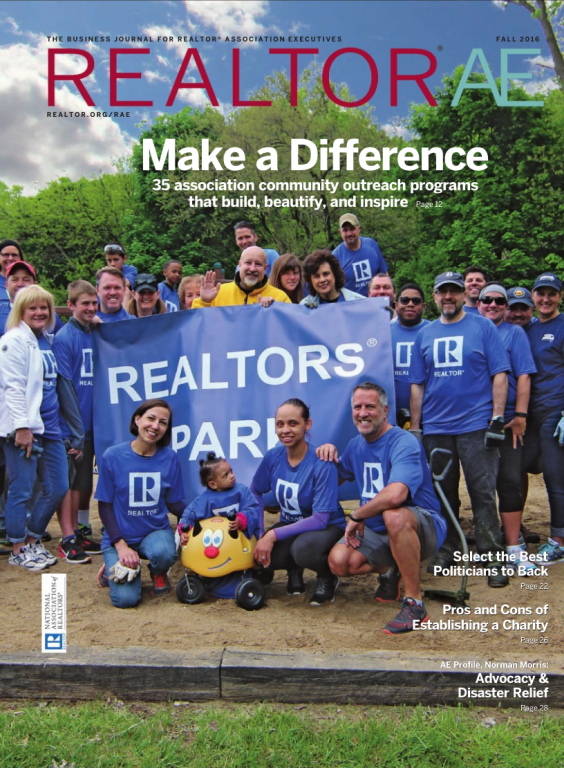 AE Committee Chair Update: Outreach Is in Our Heart