A Fresh Vision of Management

Austin Board of REALTORS® CEO on the courage to drive change.

When Emily Chenevert was pursuing her undergraduate degree in government affairs at the University of Texas at Austin, not that long ago, she thought politics would be her career. She never envisioned that she'd be running a 13,000-member REALTOR® organization as its CEO before age 40.

"I didn't think this was the path that I was going to follow," she says, "but at each new opportunity, I found nuggets of what I liked about government affairs in other aspects of association work and was able to grow my passion for the REALTOR® organization."

Chenevert joined the Austin Board of REALTORS® in 2012 as its director of government and community relations and moved through the ranks of chief operating officer and acting CEO before becoming CEO in 2018.

There is a rich tradition of association government affairs directors becoming CEOs because of their skills navigating politics outside and inside organizations. "There are practical realities to managing a board that require some political savvy, plus GADs work closely with members and intimately understand what members do, which makes us strong advocates for the industry in any role."

As CEO, Chenevert has expanded programs and launched major new initiatives that have attracted attention from her AE peers and also her community.

The city of Austin recognized the Austin board as a Family Friendly Workplace in May due in part to its policies to invest in a balanced work-life environment for staff. This includes professional development opportunities and flexible scheduling.

To enable volunteers to get their work done more efficiently, Chenevert implemented the communication tool WorkSpace by Facebook and reorganized the association's governance structure. "We cut our committee structure in half, and we found new opportunities for direct member involvement and engagement in the association," she says. Previously, decision-making was often mired in process: An initiative would go to a task force, then to a committee, and then the board of directors, but then it might have been sent back to the committee. It could take months before they could proceed on an initiative, she says. "Under our new governance structure, we've found that we're much nimbler and more responsive, and we've diversified the voices we're hearing from."

As an example, Austin's global committee, which developed program ideas to submit to the board as motions, transitioned into a council that operates independently of and alongside staff so that Chenevert has the authority to implement programming without going to the board first. "This structure gave the global council members more control over developing programs to meet their needs, which may not happen if everything has to be approved by board members who may not be well-versed in international transactions."

"Despite the fact that I run both the association and the MLS, I recognize the difference between them, and I think it's imperative for associations to determine what their independent value proposition is to our membership apart from the MLS," says Chenevert. "And that can be scary for associations that wholly own their MLSs like we do, because the MLS is our greatest asset and often the driver for connecting with members. But I think we have to separate those entities and manage them more deliberately and independently so that each one can be successful." The Austin board and its MLS recently adopted separate strategic plans, mission statements, and financials.

"There's no doubt about whether a REALTOR® association can have value without the MLS, but there's fear that, if truly independent, is there enough meat on the bone to still attract members to engage fully? And even I have to wonder that at times, but my job is to ensure that there is enough inherent value in what we offer so that members still want to be connected to us."

Chenevert turns to a network of AE peers and attends a range of industry conferences, including Inman, T3, and CMLS, to find innovative member programs, products, and services. "On any given day a trend might be starting in Austin or coming to Austin next, so if I have a raised awareness of what's happening, especially in other large urban markets, it's good for my membership. Conferences that are more industry-focused enable me to participate and learn, rather than facilitate my members' experience at a conference, like AEs typically do at NAR meetings."

Chenevert says she deeply respects the experience of her tenured colleagues and their willingness to share, but acknowledges that not having 20 years as an AE gives her the "freedom to try new things" and the courage to drive change. 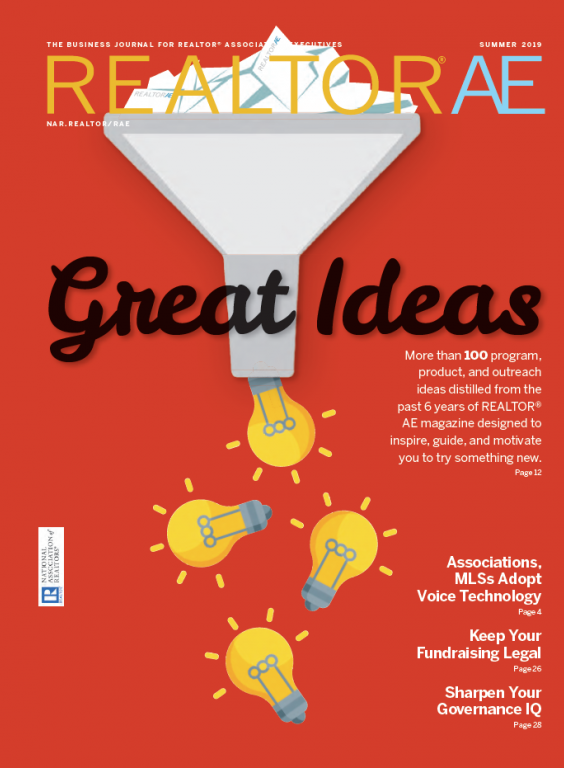 Help Leaders Stay in Their Own Lane