In this section, we examine the liability of inspectors, appraisers, and other third parties involved in real estate transactions. Many of these cases involve claims against appraisers. As demonstrated in the cases below, courts frequently consider whether the appraiser’s duty extends to the purchaser of a property, and whether the complaining party could reasonably rely, and did in fact rely, on the appraisal. In another case, the court examined the duty of an escrow agent to the purchaser of a property.

Appraiser owes a duty to lender, and that duty does not extend to purchasers of home.

Home purchasers, who lived in California, decided to purchase a home in Louisiana after performing a thirty-minute walk-through of the home. The purchase agreement indicated that the sale was “as-is,” and provided “zero” days for inspection. Also, the real estate representative, who served as representative for both buyers and seller, sent a statement to the purchasers indicating that they were waiving any potential claims regarding structural defects against the listing agency, selling representative, and owner of the property. After closing, the purchasers’ insurance inspector discovered defects in the porch, railing, and roof of the home. The purchasers sued the seller, listing broker, real estate representative, and appraiser. In this decision, the court considered the appraiser’s motion to dismiss the claims against him.

The purchasers argued that the appraiser owed them a duty because they purchased through a VA loan. According to the purchasers, VA appraisal requirements apply to the condition, and not just the value, of the home, and therefore, the appraiser’s appraisal represented that the property met the VA’s minimum property requirements. The magistrate judge rejected this argument, finding that the appraiser owed a duty to the lender, but that duty did not extend to the buyers. The judge also noted that the buyers knew the difference between an inspection and appraisal, and signed the document stating “zero” days for an inspection. The magistrate judge recommended that the court grant the appraiser’s motion to dismiss.

Homeowners purchased a multi-million-dollar home in California. During the transaction negotiations, the homeowners’ mortgage broker hired the defendant appraiser to perform an appraisal of the property. The appraisal report identified the market value of the home as the amount identical to the agreed-upon purchase price. The Uniform Residential Appraisal Report form included an Appraiser’s Certification, under which the appraiser indicated that the appraisal could be distributed to the borrower or another lender, and that those parties could rely on the appraisal in the mortgage transaction. Shortly after closing, the homeowners became concerned that they overpaid for the property. After selling the property for a loss, the homeowners sued the appraiser for fraud. The parties presented evidence during court proceedings. Instead of allowing a jury decision, at the close of the evidence, the trial court granted a directed verdict in favor of the appraiser defendants, finding that the appraised value was an opinion that could not be an actionable misrepresentation. The trial court also determined that the homeowners did not actually rely on the appraisal report.

Appraiser was not liable to purchasers where purchasers did not review or rely on the appraisal prior to the purchase.

Business owners purchased a property to be used as a commercial property for storage, maintenance, fueling, and servicing of the business’s fleet of trucks. The MLS listing stated that the property was zoned for commercial use. After the purchase, the owners were ordered to stop work on the property because it was zoned for residential use. In addition to suing the real estate entities and individuals involved in the transaction and the seller of the property, the business owners also brought suit against the appraiser for negligent misrepresentation. The appraiser moved for summary judgment on the grounds that the property owners were neither a party nor a third-party beneficiary of the appraisal contract, and that the owners could not have relied on the appraisal because it was not furnished to them until after the sale. The trial court granted summary judgment in favor of the appraiser.

Home buyers purchased a home located on one of two adjoining lots owned by the seller. The other lot contained a hotel and restaurant. The home buyers knew that the lot they purchased contained a septic drain field for the hotel/restaurant, and an addendum to the purchase and sale agreement stated that the home buyers agreed to grant an easement for the septic system. Several years later, the backyard septic system for the homebuyers’ house failed, and they requested access to the septic system in the front yard. The health district denied the request, saying that restrictive covenants on the property created uncertainty regarding ownership of septic system. Thereafter, the title insurer denied homebuyers’ claim for loss on the property. The homebuyers then sued the escrow agent for failing to investigate and disclose restrictive covenants on the property. The trial court granted summary judgment in favor of the escrow agent. The homebuyers also sued the insurance company.

Connecticut added the presence of mold to the list of items that a housing inspector is not required to evaluate during his or her inspection of the home.24 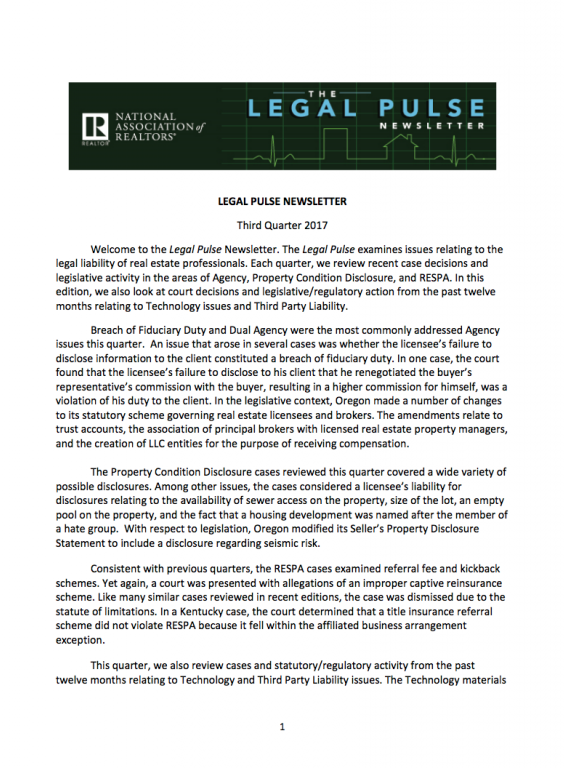