City of Miami’s financial injury from discriminatory lending practices in the City was within zone of interests protected by the Fair Housing Act.

The City of Miami brought a lawsuit against various lenders for alleged violations of the Fair Housing Act. The City of Miami argues that the lenders engaged in a pattern of racially discriminatory lending in the residential housing market over an extended period of time that caused economic harm to the City. In prior editions of the Legal Pulse, we have examined court decisions in this case. In these previous opinions, courts were split as to whether or not the City of Miami could properly bring a claim against the lenders under the FHA. In 2017, the U.S. Supreme Court issued a decision with respect to whether or not the City had standing to bring such a claim.

The U.S. Supreme Court determined that the City does qualify as an “aggrieved person” who is authorized to bring suit under the FHA. Under the FHA, an “aggrieved person” is defined as “any person” who either “claims to have been injured by a discriminatory housing practice” or believes that such an injury “is about to occur.” The City argued that the lenders’ actions hindered racial integration and desegregation in the City and caused foreclosures in minority communities. The resulting foreclosures and vacancies resulted in reduced property values and tax revenues for the City, and required the City to spend money on services to address unsafe conditions at the vacant properties. The Supreme Court found that this alleged harm fell within the zone of interests protected by the Fair Housing Act.

In order to be liable under the FHA, however, the lenders’ actions must have been the proximate cause of the alleged harm. According to the Supreme Court, “proximate cause under the FHA requires ‘some direct relation between the injury asserted and the injurious conduct alleged.’” The Court remanded the case to the lower courts to determine the standard for proximate causation.

Advertising indicating that apartment buildings did not accept Section 8 vouchers did not indicate a discriminatory preference.

Inclusive Communities Project (“ICP”) alleged that various property owners violated the Fair Housing Act by refusing to rent to Section 8 voucher holders. ICP alleged that the program was implemented in predominantly non-minority areas in the Dallas, Texas metropolitan area. ICP asserts that this refusal to rent to voucher holders is discriminatory because African American or Black families are the predominant participants in the Section 8 housing voucher program. ICP also alleged that the defendants’ advertising, which indicated that no vouchers were accepted, violated the FHA prohibition on advertisements that show a preference for one race.

The court held that there was no discriminatory treatment or disparate impact in violation of the Fair Housing Act. According to the court, advertising indicating that Section 8 vouchers were not accepted does not imply a racial preference or apply to only one race. The court granted the property owners’ motions to dismiss.

Apartment building advertising did not indicate a preference for individuals without disabilities.

The plaintiff, a wheelchair-bound individual with a service dog, alleged that the defendant apartment building used advertising that violated the Fair Housing Act’s prohibition on advertisements that show a discriminatory preference. According to the plaintiff, the apartment building used words and phrases in its advertising that showed a preference for individuals without disabilities because the advertisements described places within walking distance, described the complex amenities as including off street parking, failed to use models with disabilities, and failed to state that service animals are welcome.

The court concluded that the plaintiff “fail[ed] to delineate a single notice, statement, or advertisement that an ordinary person would conclude conveys a discriminatory preference.” The statements regarding places within walking distance do not indicate any preference, and the plaintiff failed to show any advertisements that included a model at all. Furthermore, the failure to explicitly state that service animals are permitted does not indicate any preference. The court granted the apartment building’s motion to dismiss and dismissed the claim.

Condominium owners’ association’s statement that it preferred “true service dogs” could be considered an improper statement of preference in violation of the FHA.

The resident of a condominium complex alleges that the condominium owners’ association violated several provisions of the Fair Housing Act. With respect to FHA’s prohibition against advertising that indicates a discriminatory preference, the resident argues that the condominium owners’ association violated the prohibition by advertising in its newsletter that that when considering requests for exceptions to its “no dog” policy, it prefers “true service dogs.” The resident claims that this statement indicates a preference over emotional support dogs.

The court denied the condominium association’s motion to dismiss this claim. Courts have found that published statements published by associations can violate the FHA. The court found that the association’s statement “could be construed as a preference for unit owners with handicaps that require service dogs over unit owners with handicaps that require emotional support dogs.”

Agreement whereby the owners of the apartment complex agreed to pay $50,000 to the nonprofit organization and agreed to make alterations to the property.

Fair Housing Act design and construction accessibility standards do not apply to buildings occupied prior to 1991.

The former resident of an apartment complex alleges that the building violated the design and accessibility requirements of the Fair Housing Act. The district court dismissed the claims, finding that the apartment building was first occupied prior to March 13, 1991. Relying on guidance from other court decisions, the court held that the building was exempt from the accessibility requirements because it was constructed and occupied prior to 1991. The apartment owners’ motion to dismiss was granted.

Fair Housing issues were addressed in 19 cases in 2017, which is a small decrease from the number of Fair Housing cases retrieved in 2016 ( see Table 3). While Lending issues were addressed in the largest number of cases, Advertising and Design-and-Build issues also arose in numerous cases (see Table 3). One statute was located ( see Tables 1, 6).

Liability was determined in 27 Agency cases in 2017, and the licensee was found liable in 7 2(see Table 4) of those cases.

Liability was determined in 15 Property Condition Disclosure cases in 2017, and the licensee was found liable in 53 (see Table 4) of those cases.

Liability was not determined with respect to any real estate professionals in RESPA cases in 2017 (see Table 4).

Liability was determined in 5 Fair Housing cases in 2017, and none of the cases (see Table 4) resulted in liability for the real estate professional. 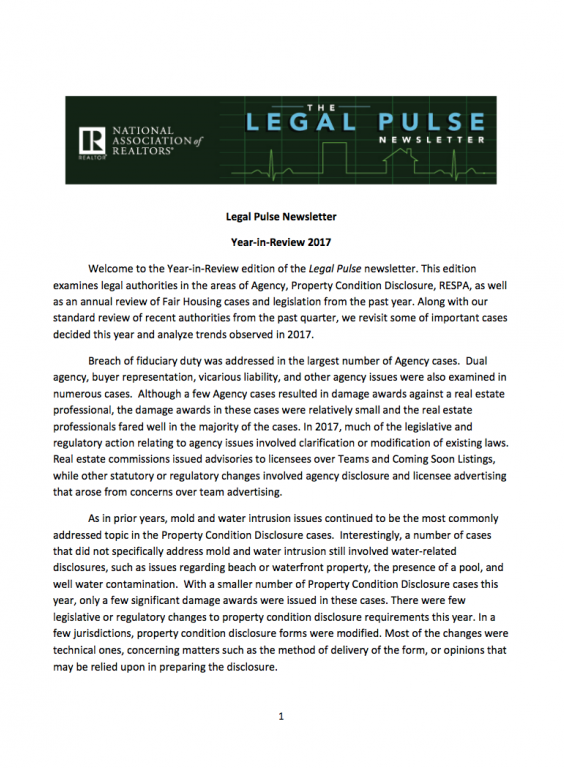