As little as twenty years ago, Brazil was a country plagued with the highest inflation rate in the world and beset by political problems, financial instability and poverty. Today it is an economic powerhouse that has surpassed the U.K. in GDP to become the world’s sixth largest economy. Brazil has become a growth engine for South America and a magnet for foreign direct investment from multinational companies.

The Making of the M​iddle Class

A key driver of Brazil’s success has been the emergence of a large middle class. During the 1990s the government enacted stringent economic policies to rein in inflation, encourage capital formation and prime the economy for growth. After a decade of market turbulence, Brazil’s economy blossomed in the 2000s and has continued to grow ever since. In the last ten years over 18 million jobs have been created which moved 36 million people into the middle class. That’s more than the entire population of Canada.

Real average incomes rose 9 percent from 2002 to 2012. The middle class, now around 55 percent of the population, is flexing its purchasing muscle and driving demand for consumer goods, cars and homes. The Brazilian middle class has become a prime target market for real estate professionals, largely replacing wealthy international buyers who used to dominate the São Paulo and Rio de Janeiro markets.

Consumer demand has been buoyed by record-low unemployment, at 4.9 percent for November 2012, and a rapid expansion in credit. While the mortgage market was almost nonexistent in the 1980s and 1990s, it began to take off in 2009 and has grown rapidly ever since. As the central bank has lowered key rates into the single digits, mortgages have become affordable to the middle class, although most property transactions are still conducted in cash.

The Brazilian mortgage market is largely funded by the government through Caixa Economica Federal, a government-owned bank which issues the majority of home loans. Private funding has been scarce because of Brazil’s history of inflation. The government has addressed this by requiring private banks to use a portion of their savings deposits to originate mortgages, which are subsidized by the government.

The government is also trying to stimulate foreign investment in the private market for mortgage-based securities, which now provides just two percent of mortgage funding and lacks foreign participation. The government’s actions include lowering the benchmark interest rate to drive investor demand for higher-yielding mortgage securities, giving tax-exempt status to foreign investors, and investing USD$1.4 billion per year of the public workers’ compensation fund into private mortgage bonds to generate liquidity in the market.

Meeting the D​emand for Housing

The homeownership rate in Brazil is over 70 percent but a large portion of society is still living in antiquated or substandard housing. A top priority for the government is upgrading the housing supply so that middle-class and lower-income households can own affordable quality homes.

Currently the market is woefully undersupplied. “The housing deficit in Brazil is presently at 8.2 million households, with 89 percent falling in the lower level of the social pyramid,” says João Teodoro da Silva, president of Conselho Federal de Corretores de Imóveis (COFECI), one of the professional associations of Brazilian real estate agents. (See sidebar.)

Through a social housing initiative called Minha Casa Minha Vida (My Home, My Life), the government has allocated over USD$50 billion for the construction of three million homes by 2014. Most will be constructed for lower-income families and financed through mortgages provided by Caixa Economica Federal and subsidized by the government. The Brazilian government is hoping to attract international investment to help fund this effort.

The housing deficit and rapid growth of the middle class have put tremendous upward pressure on home prices. In recent years, prices in Brazil’s major cities have risen faster than anywhere else in Latin America. From January 2008 to July 2012, average house prices rose 91.7 percent in real terms in São Paulo and 118.4 percent in Rio de Janeiro, making them among the most expensive markets in the Americas.

Economists are now debating whether Brazil’s housing market will experience a significant correction. During 2012 and early 2013, prices leveled out and became more in line with real income growth while credit expansion slowed.

“I do not believe we are in a bubble,” says Francisco Pesserl, Advisor to the President of COFECI. “I think we have seen the market peak and now we are in an adjustment phase.” He points out that the underlying metrics of the economy support his view that the market will continue to grow, but at a slower pace:

Money Flows in From Abroad

Brazil industrial and service sectors have become a magnet for foreign investment. A 2011 study by Ernst and Young found that Brazil was the second most popular global destination for foreign direct investment in terms of value and fifth in terms of number of projects. The value of FDI projects has tripled since 2007 from USD$19 billion to USD$63 billion.

Investor funds have been flowing into sectors across the economy. Commercial properties in São Paulo attract foreign technology and business service companies using Brazil as a base to extend operations in South America. Automobile manufacturers from around the world have invested in manufacturing facilities. Mining and energy resource companies are building processing plants. Multinational engineering and construction companies are tackling Brazil’s infrastructure needs.

Much of the growth in FDI is driven by the consumer demands of the new middle class. “The expansion of the internal marketplace in Brazil attracts more and more multinational companies wishing to establish local plants to manufacture closer to these consumers,” says da Silva. “The big cities attract the lion’s share of investments,” he says. “But what is striking is the amount of money that has entered the country for investments in the interior or in regions that until 10 years ago were not on the national roadmap, much less for international capital inflow.”

Northeast Brazil is one of these areas. The coastal cities of Fortaleza, Recife and Natal are among those hosting FIFA World Cup games in 2014 and funds are pouring into the hotel, restaurant and retail sectors. In preparation for the games, infrastructure has become a top priority. New construction and upgrades to existing airports, highways and rail systems for the games will enable better transportation and logistics across the country for future growth.

Oil and gas reserves off the southeast coast are also attracting multinational energy companies to the region. The recent discoveries of huge pre-salt oil and gas reserves will spur exploration and development and will have positive spillover effects on other industries like manufacturing.

Foreign investors can participate in the growth of the residential property market beyond just investing in major Brazilian housing developers.

As a part of the Minha Casa Minha Vida initiative, the government is looking for private equity to fund the construction of social housing projects. Individuals can purchase single or multiple units from a developer, or become involved in joint venture development opportunities.

Developers of qualifying projects receive a government subsidy and tax incentives to lower their costs. In return, they sell the homes at a pre-agreed competitive price. The program offers as much as 100 percent financing to lower-income households through the Caixa National Bank at very low interest rates.

With high subscription rates, the main challenge facing the program is maintaining adequate housing supply to meet demand. Private investors can participate for as little as USD$35,000. To find out more, go to www.myhousemylifebrazil.com.

Brazil has emerged as one of Latin America’s luxury and second home destinations. Twenty years ago only wealthy Brazilians could afford high-end residences, but now the newly rich upper middle class is purchasing second homes. Rio de Janeiro and São Paulo have become magnets for international buyers who are looking for modern, secure and integrated developments.

“Around 2004 we began seeing investors coming in from Portugal, Spain and Italy who were buying luxury properties and resort second homes, especially in the northeast,” recalls Pesserl. “Unfortunately, most of these sales were transacted through their home country agents. We responded with an initiative to reach out to agents in other countries, promoting these properties through our own people.”

Known for its beautiful beaches, the northeast coast has become a popular vacation destination for Latin Americans. The cities of Natal, Recife and Fortaleza on the most northeastern coast have experienced a property boom, especially with the buildup around the World Cup. As infrastructure and airports are upgraded for the games, demand will grow.

Though Brazil has been in the international investment spotlight for several years, individual U.S. investors have not participated to the extent of Europeans and the Chinese. “It’s a little like skydiving,” says Jonathan Asbell, CIPS, of Keller Williams in Boca Raton, Florida, who also currently serves as NAR President’s Liaison to Brazil. “Everyone thinks it’s a great idea until they have to jump out of the plane.”

A few Americans have stuck their toe in the water through investing in the Minha Casa Minha Vida program. Others have participated through real estate investment trusts like Rio Bravo Investimentos, which to Americans is a more familiar instrument. The Brazilian government is boosting the popularity of Brazilian REITs by recently removing a six percent tax on the financial transactions of foreigners buying REITs.

Even though Brazil has a burgeoning middle class and is rich in natural resources, deficits must be addressed to sustain growth. “There is a shortage of skilled professionals, an excess of regulations and taxes and a lack of proper infrastructure to support this quick demand,” reports da Silva. Pesserl adds that “joint efforts between the government and the private sector must be established to educate and develop technical skills among large amounts of non-qualified workers.”

Still, the long-term outlook for Brazil’s economy is optimistic. With its relatively stable economy, emerging consumer market and huge untapped reserves of oil, gas and minerals, the real estate market should continue to expand and with it a role for international investments. 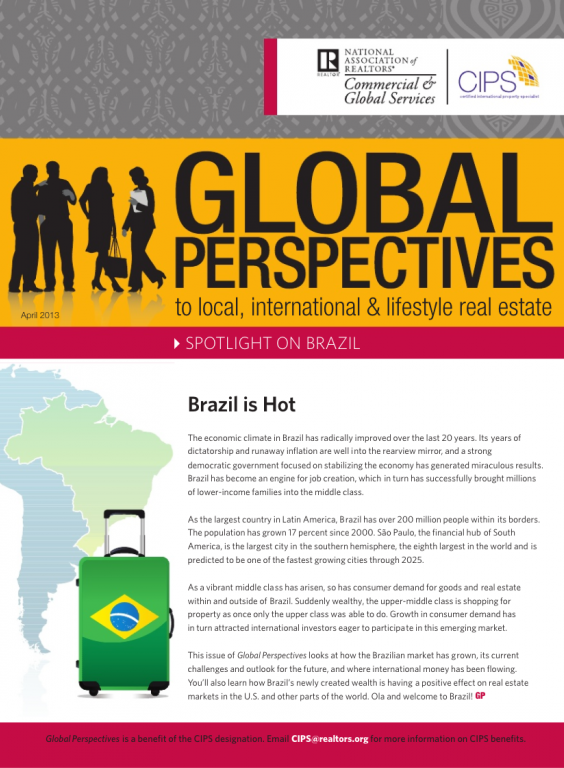