That may sound like a chicken-or-egg question, but in this case, there’s a right answer — or at least a growing awareness that creating vibrant public spaces is a winning economic strategy.

As a report by the Project for Public Spaces (PPS) points out, place has always mattered. The first cities, after all, emerged because people gathered at crossroads, creating lively hubs to exchange goods and ideas.

The basic premise holds true today. Cities need ap­pealing places — parks, plazas, main streets, markets — where people can interact. Provide them, and pros­perity — in the form of jobs — will follow.

“This is what businesses seek,” states the PPS report. “They want places that are attractive to employees, places where connections can happen, where productivity and creativity increase and where the professional networks foster collaboration and innovation.”

The report, “Putting Our Jobs Back in Place,” argues that placemaking is the best way to generate lasting prosperity at a time when technology gives people and companies greater freedom to work and do business wherever they please.

“There’s a realization ... that capital and people can go where they like more than ever before,” says Ethan Kent, a vice president with PPS, a nonprofit organization based in New York that helps cities create public spaces. “For that reason, place matters more than ever.”

That’s made placemaking a go-to strategy for driving prosperity — and smart growth.

A place that attracts people will also attract development. And that gives cities an opportunity to exercise smart growth principles such as density, walkability, mixed-use, access to transit and green design/construction as additional development occurs. “We think placemaking is often the best way of accomplishing smart growth,” Kent says.

The redevelopment of Campus Martius Park in downtown Detroit showcases how placemaking, smart growth and economic development can go hand-in-hand.

“Right from the start, Campus Martius was meant to be a new place for economic development in the heart of downtown anchored by a major public space,” says Robert Gregory, president of the nonprofit organization overseeing the park and one of the people who led the effort to build it.

Mission accomplished. “It’s exceeded expectations,” Gregory says. “We get calls from places all over the country that want to repeat what we’ve done.”

What Detroit did — with help from PPS — was turn a tangled intersection into a 2.5-acre park that draws 2 million visitors a year and won an urban open space award from the Urban Land Institute. But that’s not all. Since opening in 2004, the $20-million park has triggered an estimated $700 million of adjacent devel­opment — including a new headquarters for business software maker Compuware Corp.

Compuware’s desire to move its headquarters from the suburbs to a more central location paralleled the city’s in­terest in building Campus Martius Park, which enabled the two projects to proceed as one. “The fact that they were planned together made a big difference,” Gregory says. “It created a critical mass of momentum.”

More than 2,200 Compuware employees work in the high-rise that is 1.2 million square feet. They were joined this summer by 1,700 employees of Quicken Loans, which moved its headquarters from the suburbs and now leases four of the tower’s 16 floors. Coming to an adjacent building over the next few years: 500 em­ployees of GalaxE.Solutions, a New Jersey-based busi­ness software maker that’s expanding to Detroit.

All of that adds up to a shot in the arm for an ailing community. “Detroit is a very hurting city, but right around the park there’s been an infusion of restaurants and small shops,” says Bill McGraw, director of media relations at Compuware. “The park has helped create a sophisticated urban feeling.”

Slowly but surely, it’s also creating a neighborhood where people don’t just work, but want to live as empty retail and office buildings are being converted to hous­ing. “So far, we’ve had 15 or 20 employees move into the city ... and we have a ton of other people looking into it,” says David Carroll, vice president at Quicken.

The pairing of the Compuware building with Campus Martius Park is a case of one plus one equaling three, Carroll says. “The building is great. The park is great. We really looked at it as a package deal.”

Campus Martius Park offers many placemaking lessons. The most important: give people lots to do throughout the day, week and year. Besides providing benches and tables for people to hang out, Campus Martius Park hosts music, movies and other events plus a cafe. In the winter, people flock to an ice skating rink.

“Eighty percent of the success of a public space is how it’s managed,” says Kent. “Focus on what people are going to do there, then support that with the design. If design leads, you’re limited. That’s where some of these (projects) have gone wrong.”

A century ago, before it was carved up and covered by roads, Campus Martius was considered the heart of the city, a green gathering space in the middle of town. And so it is again. “Most every city has an area like Campus Martius that could become a great public space,” Gregory says.

Placemaking Chicago is a collaboration between the Metropolitan Planning Council and the PPS. Its mis­sion: promote grassroots placemaking through outreach, education, collaboration and advocacy.

Many of the projects supported by Placemaking Chicago are modest compared to Campus Martius, but the hope is they will blossom into something bigger. “One of the ideas of placemaking is to start with the petunias — start with something small and generate energy,” Sommer said.

Placemaking Chicago recently helped local residents develop a plan to turn an unappealing plaza above an underground train station into a welcoming entry to their urban neighborhood. While thousands of people pass through the quarter-acre plaza — a.k.a. the Polish Triangle — every day to catch the train or hop on a bus, they rarely tarry as the plaza offers few reasons — a fountain, metal benches and some trees — to linger.

“It’s not a great place right now, but we came up with a realistic plan based on what residents said they would like to see in that space,” Sommer says.

The plan is being acted on in bits and pieces, but one goal is to boost nearby retail by making the plaza a better place to visit through improved lighting, more attractive landscaping and ongoing activities such as art fairs and musical performances.

While placemaking is not new, doing it “on purpose” is an emerging economic development strategy. “We know we’re not reinventing the wheel,” says Karin Sommer, project manager for Placemaking Chicago. “In some communities, (placemaking) happens organically, but in others, it needs a little help.”

Oakland County Economic Development in Michigan takes a micro and a macro approach to placemaking, assisting specific communities with specific projects like downtown revitalization while also branding the county and its distinct geographic environs with place-based identities. “If we don’t establish Oakland County as a place people want to be, all the local stuff we do won’t matter,” says Doug Smith, deputy county executive.

In the late 1990s, Oakland County began billing itself as Automation Alley to reflect the deep pool of high-tech manufacturing talent within the auto industry. More recently, it launched a Medical Main Street initiative to spotlight the growth of the health care industry in the area — fueled over the years by the generous medical benefits of auto workers.

DestinationOakland.com highlights seven place-based environs within the county ranging from Natural Rivers to World Crossroads — each with unique social, natural and economic qualities that appeal to different people. “We use that all the time in economic development,” Smith says. “With some small high-tech companies, the trail system is sometimes more important than the taxes.”

Authenticity is the key. “How you brand is critical, but branding has to have reality behind it,” Smith says. “You have to take a critical look at your geography and resources and understand what your place-based assets are.”

That’s what Owensboro, Ky., is doing. “Owensboro is a river town that had really lost touch with its connection to the river and its understanding of how downtowns are important to the quality of life,” says Fred Reeves, executive director for the downtown development authority.

Working with Gateway Planning Group out of Fort Worth, Texas, Owensboro launched a downtown placemaking initiative. The plan: restore a 4-acre park on the Ohio River that had been gnawed in half by erosion; create a plaza connecting the park to the downtown; establish a regional farmer’s market in the plaza; build a new convention center; and convert a federal highway that bisected downtown into a local street.

“Every one of those pieces is in some stage of moving forward,” says Reeves. One of the expected benefits: Owensboro employers will be better able to compete with employers in larger cities for talent, thanks to placemaking.

“We will have the most beautiful destination park on the Ohio River ... and when employers bring job candidates in, they’re going to see a really neat downtown, and they’re going to like it,” Reeves said. 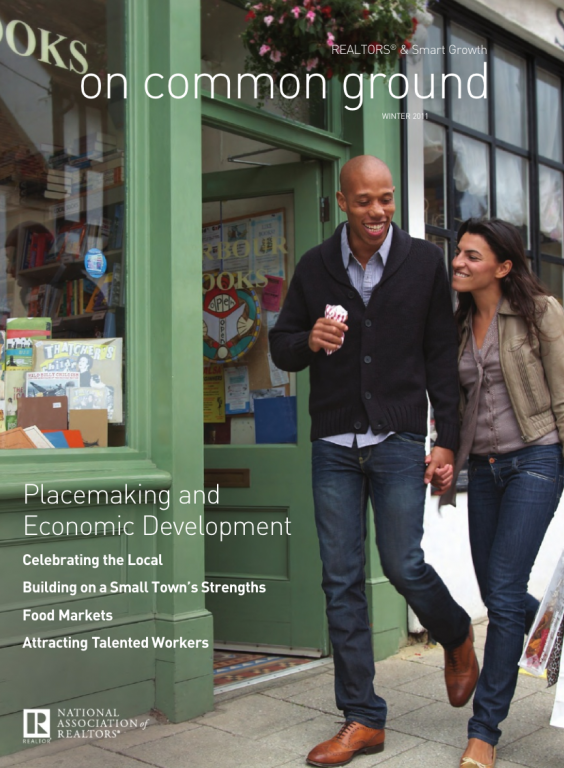 A New Path to Economic Development