Your Champions on the Virtual Hustings

By: Frederik Heller
Supported candidates hone their priorities as they find new ways to connect with voters during the pandemic.

In early February, Lauren Melo realized the time was right to make a run for the Florida House of Representatives. The broker-owner of Florida’s Realty Specialists in Naples and 2020 president of the Naples Area Board of REALTORS® had just learned that she was free of breast cancer, her youngest daughter would soon graduate from high school, and her son had returned safely from deployment with the Army in Afghanistan. It also helped that the incumbent state representative, who was vacating his seat to run for Congress, was urging her to get into the race.

Within days of filing campaign paperwork to enter the Republican primary, Melo had raised more than $60,000. And leading into the Aug. 18 race where she faced two opponents, Melo was favored to win the nomination in her GOP-leaning district with backing from Florida REALTORS® among other organizations. “It was exhausting raising that much money in such a short time,” she says. “And then COVID-19 hit. Now, that was a life-changing moment.” She won the primary handily, garnering 58.2% of the votes.

The corona­virus has upended much of the way grassroots politicking proceeds, with in-person events, door-knocking, and other tried-and-true methods mostly off the table. Instead, campaigns have sharpened their social media strategies and developed indispensable livestreaming events and virtual meet-and-greets.

States have pivoted too, with at least 16 pushing back their primary elections and many promoting mail-in and other early voting options to help people avoid crowded polling places. The result is that local candidates may have a shorter time frame to raise funds and make their names known. Florida ­REALTORS® is encouraging its members not only to register to vote but also, for the first time, to take advantage of voting by mail, “With so much changing so quickly,” says Genessa Casanova, political director for Florida REALTORS®, “we’re making sure our members have all the information they need to vote right at their fingertips.”

REALTOR® associations can have an outsized impact on local and state politics. “Organizations like ours can provide candidates with opportunities to reach voters in new ways,” says Brandon Alderete, director of political affairs for Texas ­REALTORS®, citing targeted social media campaigns and streaming online speaking engagements as powerful tools. “We have a voice and we have a channel.”

REALTOR® organizations have long focused on electing REALTOR® champions—­candidates, regardless of party affiliation, who understand the importance of real estate in driving economic activity and building strong communities. And Melo, a real estate practitioner since 2009, is among those champions who are REALTORS® themselves. Their professional experience deeply informs their campaign priorities.

Melo was able to draw upon her diverse background, besides running a real estate brokerage and leading a local REALTOR® association, in launching her candidacy. She formerly owned a trucking company and served as a guardian ad litem to represent children’s interests in the state court system. Melo contends that the county overpaid for public land while struggling to come up with funding measures for affordable housing. And she points out that proposed limits on short-term rentals in her area would have major economic consequences. “The county wants to limit short-term rentals to nothing less than six months, which would put billions of dollars in economic stimulus in jeopardy,” she said. “It was clear to me that a lot of things are really wrong, and I have to try to do something about it.”

After she paused political activities at the outset of the pandemic to focus on delivering food and supplies to local food banks, her campaign gained momentum, in large part from the support she had from her state and local associations and other ­REALTORS®. Supporters wore t-shirts, shared social media posts to spread the word to voters, and sometimes even knocked on doors while following social distancing measures. She received donations from the Florida REALTORS® Political Action Committee, the Naples chapter of the Women’s Council of REALTORS®, and individual members. “I’ve always had a desire to serve,” she says. “It means everything to me that my state, board, and peers have rallied behind me.”

Elsewhere in the state, Rep. Jason Shoaf, also a REALTOR®, is running for reelection to the Florida House. His district of 156,000 residents spans ten counties in the Florida panhandle, still recovering from the effects of Hurricane Michael in 2018—a situation compounded by the impact of COVID-19.

Shoaf, named one of NAR’s 30 Under 30 honorees in 2006, is today both a broker with 1st Priority Realty & Management in Tallahassee, Fla., and an executive with a local natural gas provider. He won his seat in a special election last year. “I had never been in politics at any level but cared about the issues in my community,” he says. “You can’t really grow a small business or make a decent living without core, basic property rights. That’s what really fires me up.”

Shoaf was unopposed in the Republican primary, and is a strong favorite in November, having won 71 percent of the vote in 2019. Despite Florida’s surging number of COVID-19 cases over the summer, he remains steadfast in his opposition to government orders to shut down businesses. “I’m not really a fan of restrictions on private industry,” admits Shoaf. “I fought hard to get the state to reopen vacation businesses when they were shut down earlier this year. The Panhandle has experienced more than its fair share of disasters, and we don’t have big resorts and hotels. It’s all small businesses, and the shutdown was having a more devastating impact than the virus at that point.”

The pandemic, Shoaf says, “calls us to go back to the basics. We’re social distancing, but we have to continue finding ways to interact with our constituents,” he says. Shoaf relies on the real estate community to bolster support for him and he looks to REALTORS® to inform his decisions on legislation. “REALTORS® have a much better idea of what’s going on in their communities than many other professions do,” he says. “They’re a walking book of knowledge for what’s happening on the ground.”

That sentiment is echoed by Texas State Rep. Cody Harris, owner of Liberty Land & Ranch in Palestine, Texas. Elected in 2018 in a competitive Republican primary, he is unopposed in this year’s race. “I would not have been elected had it not been for the support of the REALTOR® community,” he says. “­REALTORS® know everyone and help spread the word about who champions the community. It’s truly a grassroots, locally driven support base.”

As the representative for a rural area in East Texas serving 161,000 residents in four counties, Harris credits his experience as a real estate broker with how he evaluates legislation and connects with voters.

“Being a broker has given me the insights to help constituents understand such issues as eminent domain and appraised value vs. tax assessment rates,” he says. “I see pipelines cutting across farmland, family farms threatened by efforts to acquire land for a high-speed rail line that’s planned between Dallas and Houston. Being the advocate for this area and providing a rural voice in the state capital is essential.”

Also running for reelection to the Texas statehouse is Vikki Goodwin, broker-owner of Goodwin & Goodwin Real Estate in Austin. Goodwin, a Democrat, flipped her seat from red to blue in 2018, having benefited from changing demographics in her area in recent years.

What propelled her into electoral politics was the issue of education funding. While quality schools were important to her as a parent of three children and step­parent of two, she found it also came up as a central concern for home buyers.

“Ninety percent of my clients, even those without kids, wanted to be near good schools,” she says. “I was always involved in school organizations, and school funding in the state is a constant problem. I realized there are certain times when you are called on to step up and advocate.”

Like all candidates must do these days, Goodwin is rethinking her outreach to voters in light of the pandemic, using tactics like phone banks, social media, and online events. And with the shift to remote campaigning, she sees a silver lining. “While the energy in the room during a public event just can’t be replicated online, so many more people from across the state are partici­pating,” she says. “I much prefer seeing people’s faces and body language, but we have to be flexible and adapt.”

As REALTORS® prepare to vote in November, they’ll no doubt be weighing how candidates are addressing economic and business concerns against the backdrop of the coronavirus and all the ways it has disrupted life. Regardless of the voting method they opt for, REALTORS® have an important role in advocating for strong markets and healthy communities, a message that local and state associations nationwide will be communicating right up until Election Day.

Since the passage of California’s Proposition 13 back in 1978, properties in the state can be reassessed for tax purposes only when a home is sold. But in a closely watched ballot measure with major implications for buyers and sellers and the real estate community, voters will consider a proposal to allow home owners over the age of 55, people with severe disabilities, and victims of natural disasters and wildfires to transfer the property tax base from their old homes with them to their new ones, regardless of the new residence’s value or location. Advocates for Proposition 19, including the California Association of REALTORS®, note that the burden of a higher tax bill discourages older Californians from moving, which limits supply and makes it harder for younger families to buy homes.

The measure, with backing from an Issues Mobilization Grant from NAR, aims to give a boost to the California economic recovery from the COVID-19 pandemic, with long-term revenue of over $1 billion annually. In enabling homeowners in these groups to move to new homes while keeping their current property tax base, the proposition would generate revenue by opening up homeownership opportunities throughout the state and through the closing of loopholes that allow owners of certain vacation and income properties to avoid paying their fair share of property taxes.

Frederik Heller is Director of Library Operations and Information Strategy at the National Association of REALTORS. He can be reached at fheller@nar.realtor or 312-329-8361.
Search REALTOR® Magazine 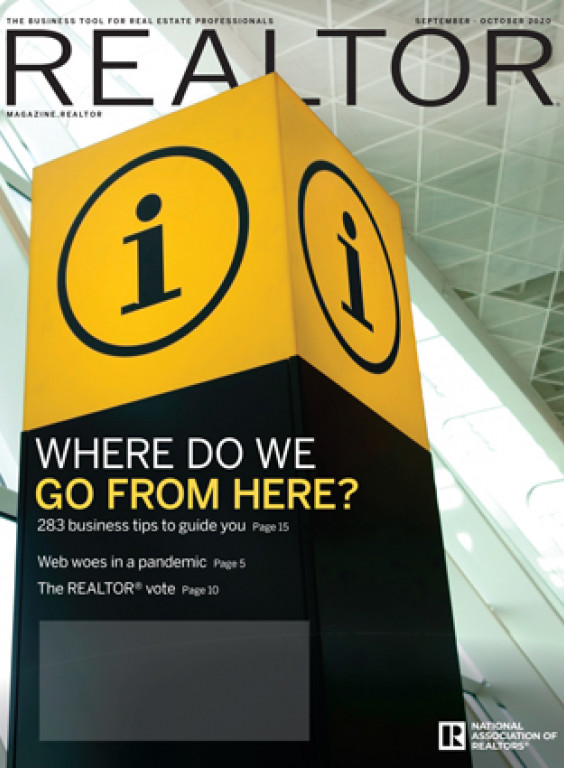 How REALTORS® Turn Around Elections

Whether aiming for the city council, statehouse, or Congress, supported candidates all understand the importance of healthy real estate markets.