The Helping Hand of REALTORS®

Community Outreach
By: Christina Hoffmann
The REALTORS® Relief Foundation at 20: REALTORS® on the ground helping to make their communities whole.

“I grabbed my son out of bed, screamed for my daughter, and lay on top of them in an internal hallway just as the tornado hit. ‘I have you.’ ‘I have you.’ ‘I have you,’ I kept saying to my kids. I could hear the walls moving, glass breaking, nails pulling from [boards], and the sudden boom of wind. Then it was over. We were there in the pitch dark with rain coming in. We lay low until morning and realized the devastation.”

By 6 a.m., Anna Altic, a broker with real estate company Parks, and her two children, Finn, now 14, and Annie, now 17, learned that parts of their roof were gone, their two cars were totaled, the carport and shed had disappeared, and every power line as far she could see had snapped, along with many of the tree-thick utility poles.

Among the first people to arrive to help the neighborhood clean up debris: REALTORS®. The first funds she saw—within about a week—were from REALTORS®, too.

Altic, AHWD, EPRO, learned about grants available to victims of natural disasters—via the REALTORS® Relief Foundation—through her local association president, who called to check on her before daylight. She received a combined $2,000 from the RRF (disbursed by the Tennessee and the Greater Nashville associations), a much-needed short-term lifeline.

“It was a full-time job dealing with the insurers because there were different adjusters for the house and each of the cars, and they were all in different time zones,” Altic says. Her insurer considered the home habitable despite the damage and loss of electricity, which meant it wouldn’t fund a rental or hotel. To boot, it was weeks before she saw any insurance money.

“When you’re self-employed, you feel like an island sometimes,” Altic says. “I had this rough thing happen, and people who don’t have anything to gain from helping me are the first to jump in. I can’t wait to pay it forward.”

The REALTORS® Relief Foundation has been paying it forward to disaster victims for 20 years, ever since the horrific attacks of 9/11. Over two decades, it has disbursed $33 million to help 17,000 families in 40 states and territories cope with the devastation of displacement and loss after a natural disaster. None of the money collected is used for administrative costs; those are absorbed by NAR to ensure 100% of donations make it to victims.

“When you go through something like this, you’re making so many decisions, dealing with so much information,” says RRF recipient Kim Wittman of Lawrence, Kan. “The last thing you have time to worry about where the money is coming from. Having the cash flow was a relief.”

Despite this success, “we haven’t done a good job of letting our members know the foundation exists and exactly what it does,” says Mike Ford, RRF board president and a practitioner with Coldwell Banker Heritage Homes in West Memphis, Ark. “It’s the National Association of REALTORS®’ best-kept secret.”

The foundation is now in the midst of a campaign to raise $8.5 million—the same amount NAR raised and disbursed after 9/11. The eventual goal: Enable the 501(c)(3) to operate in perpetuity without relying significantly on real-time fundraising.

“We want the foundation to be less reactive [to disasters] and more proactive,” says Dave Legaz, a broker with Keller Williams Realty Landmark in Flushing, N.Y., and 2021 RRF campaign chair. Legaz, who is also serving this year as president of the New York State Association of REALTORS®, is a retired New York City Police Department sergeant who lost his partner during 9/11.

The campaign, called Hope Rising, launched June 28, 2021, and continues through 2021. In August, NAR and its subsidiaries—Second Century Ventures, SentriLock LLC, REALTORS® Information Network, Center for REALTOR® Development, and Realtors Property Resource®—contributed $1.25 million, the largest donation in the foundation’s history. Then, at a virtual commemorative event on Sept. 10, NAR President Charlie Oppler challenged all members to help the foundation reach its $8.5 million goal. The event took the campaign past the $7.2 million mark, 86% of the goal. (See the major donor list.)

If you want to help the foundation reach its goal, you'll find donation and disclaimer information here.

Relief at the Ready

The foundation’s response to disaster is remarkably swift. State and local associations work directly with victims and can apply for RRF funding as soon as a national, state, or local official declares a state of emergency. Those with their own nonprofit foundations handle much of the process; others partner with NAR for services like accounting and disbursement. In all cases, the RRF board approves disaster relief grant applications put forth by associations.

Grant amounts depend on the severity of the disaster. If 20 homes are affected, the total grant might be $20,000, about $1,000 per family. After a large-scale event like a hurricane, grants can total several million dollars.

“We want the money to go as far as possible but also to have impact,” says RRF Board Vice President Leigh Brown. “$100 to someone in crisis doesn’t go anywhere. But $1,000 gives them a moment to process what comes next and get some necessaries covered like rent or mortgage.”

Relief often comes within days. Greg Larson and his wife left their Bismarck, N.D., home on a raft in March 2011 during what became a 93-day flood after sudden snow melt overburdened Missouri River dams. Larson’s total out-of-pocket repair costs came to about $90,000, and he was displaced for 18 months.

“We didn’t hear yes or no from the National Flood Insurance Program until August or September,” says Larson, GRI, an agent with Century 21 Morrison Realty. “But within seven days of being out of our home, we got a $1,000 check from the RRF. We got no other aid because the NFIP deemed the event prolonged water damage, not flood damage. That [$1,000] was cash to get us through the hard part, like the upfront expense of finding a place.”

The nine RRF board members take the urgency of their task seriously. “I can’t tell you how many times people have cleared their calendars [to expedite grants],” says Brown. “Board members’ hearts are in the outcomes, not in accolades.”

NAR staff provides the board with a package of information, including applications, photos, news reports, and verifications, ahead of their meetings. “By the time the RRF board sees the request, we don’t have to do any legwork,” Brown says.

RRF funds have occasionally had a worldwide impact, including support for a Habitat for Humanity project after the 2004 Indian Ocean tsunami. But the board now draws the line at international disasters because “we don’t have unlimited funds,” Brown says. “We have to focus where we have measurable impact. Still, we’re not going to say, ‘That’s how we’ve always done it.’ NAR and the RRF revisit their governance and structure [as needed]. That’s what I love about us.”

On the morning of Sept. 11, 2001, NAR President Richard Mendenhall, of Columbia, Mo., was recovering from a double hernia operation. As he watched the Al Qaeda terrorist attacks unfold on TV, his military training as a Green Beret in Vietnam kicked in, and he circled the wagons. After making sure his leadership team and NAR staff were OK, he called an emergency meeting with his team—Martin Edwards Jr. of Memphis, Tenn., Pat Kaplan of Portland, Ore., and Cathy Whatley of Jacksonville, Fla. Many people might lose their homes due to loss of income: Was there anything NAR could do?

By the next day, the association had a plan to help victims’ families stay in their home with the caveat, Mendenhall insisted, “that not a penny go to promotions or administrative costs.” NAR teed up the giving with $1 million, then secured another $1 million from Fannie Mae. State and local associations and brokerages stepped in too. Mendenhall, who’s now an honorary RRF campaign co-chair along with his original team, even recalls a $3.50 donation from a little boy who heard about the effort on the radio.

Once various state associations identified the affected families, “we paid three months of mortgage or rent for each of them,” Mendenhall says. Working with REALTOR® volunteers and association staff in New York, New Jersey, Connecticut, Maryland, Massachusetts, Pennsylvania, Virginia, and Washington, D.C., NAR collected and paid out nearly $8.5 million—helping 1,333 families—in a period of just three months.

The powerful feeling of making a difference in the wake of the 9/11 attacks led to a broadened mission: serve as a beacon of hope for those suddenly displaced from their home by disaster. The foundation was born.

Stepping Up and Stepping In

With some disasters, simply getting to people to provide relief is fraught. The town of Lumberton, N.C., was devastated by Hurricane Matthew in 2016. Waist-high water, impassable roads, and lack of water or electricity left people stranded, remembers Linda Oxendine, the town’s tax collector, who, out of necessity, earned a battlefield promotion to disaster recovery director.

“[REALTORS®] were one of the best things that could happen to our city and county,” Oxendine says. “They were doing damage assessment even before FEMA could arrive.”

“REALTOR® volunteers showed up 7 days a week for weeks,” says Wendy Harris, ABR, CRS, who took a month off her practice as broker-owner of Team Harris Real Estate in Fayetteville, N.C., to volunteer in Lumberton.

Members created a Facebook group for town residents to communicate, set up a supply distribution point in a parking lot, canvassed neighborhoods to assess well-being and damage, and helped people complete RRF applications, Harris and Oxendine say. In addition, the REALTORS® worked with the mayor to stop the code enforcement department from condemning homes. The area is so impoverished that many residents would have no other housing options.

Further complicating matters was the difficulty of verifying who actually lived where, as many residents of this poor, rural town live in homes passed down over decades and without deeds or lease agreements in their name. Harris worked with Oxendine, who was able to confirm folks’ residency via tax records and utility payments.

Once that was squared away, the checks moved fast. “The grant money feels like a million dollars when you’re walking out with nothing,” Oxendine says.

Beyond financial relief and boots on the ground, members helped the town better prepare for the future, Oxendine adds. “They knew what information to collect and helped create a database to store the information so our response can be a lot faster.”

It’s a model that plays out in every nook of the country every day, not just during natural disasters: Members volunteer in their communities to support the underprivileged, the sick, the challenged, and the unhoused. “REALTORS® are there in good and bad times,” says RRF Board President Ford. “[The RRF] solidifies the fact we’re the core of our community.”

For recipients like Larson in North Dakota, “it’s hard to explain an industry that’ll do that for you, right away, with few questions asked. It’s a real throat-catcher.”

Excerpts from 9/11 thank-you letters to the N.J. Association of REALTORS®:

“We are touched [by your assistance] with housing costs. [My husband] was the sole breadwinner for our household. We are still coming to terms with our loss, and each day brings new challenges. However, the outpouring of love and support helps us as we realize that we are not alone and that many people care.”

“. . . most of all, during a time when our family was ripped apart, you’ve helped us to stay together in the warmth and safety of our home.”

“You have offered assistance in a way which allowed me to maintain my dignity in the wake of this tragedy, and that is most sincerely appreciated.”

“I have received financial assistance from your organization . . . and it has helped us tremendously in my efforts to get the life of my children back to some sort of structure . . . your method of distribution was with true charity and respect.”

Make a donation at nar.realtor/RRF. 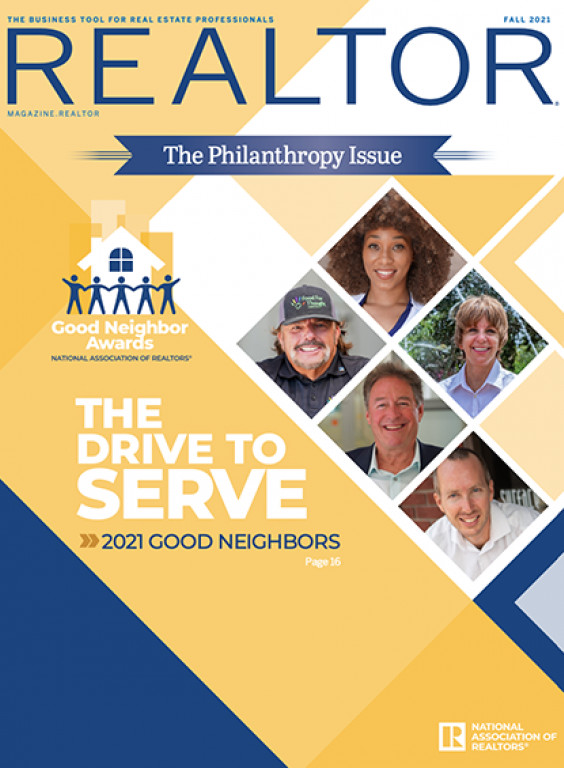