Never, Ever Give Up

For people committed to volunteer service, the days can be long, but the years seem to fly by. The original Good Neighbor winners were recognized by NAR in 2000 for their exceptional impact on those less fortunate in their communities. It’s hardly surprising that four of those honorees continue to make life better for others every day. The fifth, Joseph Pitts, passed away in 2005. Here’s an update on that first group.

Oral Lee Brown adopted a first-grade class in her Oakland, Calif., neighborhood and made a promise: “Stay in school, and I’ll send you to college.” She’s kept her word. Nineteen kids from that first class went to college. Brown has gone on to adopt a new class every four years. As of today, 82 of Brown’s protégés have earned a degree, while 18 are college juniors. Attention from the original award led to added support from REALTORS®.  Her local association has hosted an annual walkathon for 17 years, raising $400,000 for the Oral Lee Brown Foundation. “It was founded on a promise and a prayer and has turned out to be a blessing,” she says.

Jill Rich is the only Good Neighbor to have been selected twice for different charitable projects. In 2000 she was recognized for her disaster relief work with the American Red Cross and for her work with the homeless. In 2006, she was honored for helping 54 young Sudanese refugees, sometimes referred to as “Lost Boys” in the media, start a new life in Arizona.

Since then, Rich has focused on assisting refugees from nearly 20 countries—from Syria to El Salvador. “To be a good neighbor, a force for good, is not only good for our local and global communities,” says Rich, “it is a good practice professionally, providing credibility and instilling trust.”

Gil Gillenwater first visited Agua Prieta, Mexico, 200 miles from his home in Scottsdale, Ariz., with a plan to deliver food to the poor. That 1987 road trip led to his co-founding a nonprofit that’s raised and invested over $10 million to build 900 homes, as well as education centers and orphanages; fund 2,000 scholarships; and distribute tons of food and medical supplies. Families have been lifted from extreme poverty to prosper in their home country.

More than 23,000 U.S. volunteers have come to Rancho Feliz to help. “We’ve changed the lives of thousands of our Mexican neighbors,” he says. “But the most surprising impact has been on us.”

As a single mother whose ex-husband was in jail, Linda Booker was acquainted with troubles. Around the holidays, the pain worsened when she couldn’t afford  presents for her two children. She vowed to help others avoid similar heartbreak. Thirty-five years ago, she founded Christmas Angels to collect toys and clothes for children living in poverty. When we first recognized Booker in 2000, she was collecting 25,000 holiday gifts each year. In total, the organization has distributed more than 1 million gifts to brighten the holidays for children in need.

“It is a program full of miracles,” says Booker. “I need that at the end of the year to keep going.”

Before he passed away in 2005, Joe Pitts was dubbed the “mayor” of West Palm Beach for his varied efforts to revitalize his struggling Florida hometown. “This area had just been written off,” he said back in 2000. Pitts volunteered on virtually every committee of the local redevelopment agency to help install new infrastructure, change zoning, and build a community gym and a wellness center for low-income residents.

He brought a $9 million new school to the area to relieve overcrowding and neglect, convincing 35 property owners to sell their adjoining land to the school district to make room for the expansion. Pitts donated his services to broker the deals.

Get to know the 2019 Good Neighbor Award winners.

Sara Geimer is the Manager of the Good Neighbor Awards for the National Association of REALTORS®.
Search REALTOR® Magazine 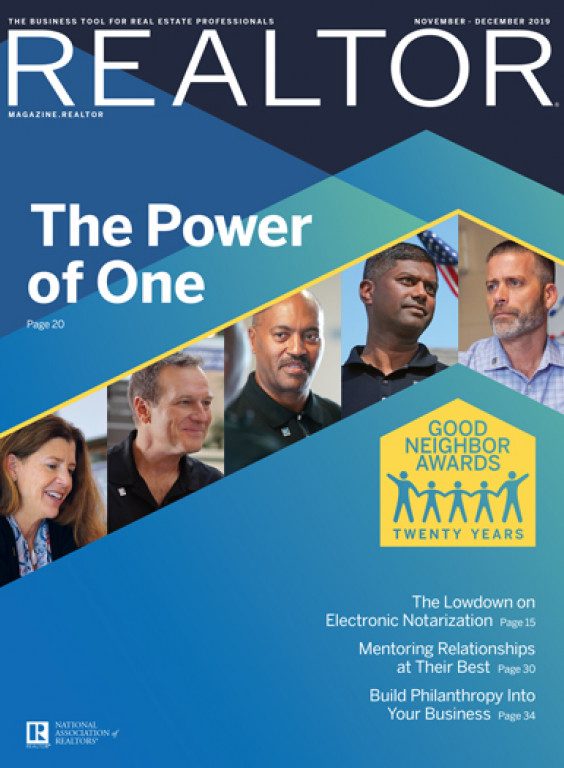 An Unbreakable Chain of Caring