The Impact of Political Populism on U.S. and European Real Estate

By nearly any standard, 2016 was an extraordinary year in the world of politics. Starting with Great Britain’s Brexit vote, then rippling through major elections across Europe and the United States, populism has been upending the status quo.

While it may be tempting to view populism as a monolithic movement extending across borders, this would be an oversimplification of the various forces at play in each election—and would encourage faulty assumptions about how developments may unfold in 2017 and beyond.

At its root, populism pits the broader population against the powerful. It includes people with dramatically different agendas representing both ends of the political spectrum and everything in between. (Case in point: During the U.S. presidential primaries, supporters of Democratic contender Bernie Sanders and Republican Donald Trump were often characterized as two sides of the same coin.)

What populists share is a strong suspicion that traditional institutions no longer serve them. They’ve decided it’s time to change the status quo, and that means removing the well-entrenched elitists currently holding power.

What happens after a cart has been overturned? That remains to be seen. In fact, widespread uncertainty about future developments is the single most dominant issue in today’s global markets. With that in mind, what follows is a country-by-country summary of several of the key factors at play, along with potential implications for real estate markets1.

The British people may have voted to leave the European Union last June, but there are a thousand different ways this could play out, ranging from a hard to a soft exit. Prime Minister Theresa May has promised to trigger Article 50 of the Lisbon Treaty by the end of March 2017, which would officially start the exit process.

In January, she delivered a 12-point plan that promised a clean break from the single European market, but also indicated enthusiasm to work with the EU on trade agreements and other matters. May envisions a “phased” arrangement requiring at least two years to complete and including a Parliamentary vote on the final Brexit deal. While signaling a desire to cooperate with the EU, she also threatened to walk away from unsatisfactory terms.

To be sure, exiting from the EU is completely uncharted territory and there are many significant areas to hammer out, including the movements of people, the trading of goods and security matters. While the process is generally expected to take two years, some supporters downplay its complexity but others think it will take much longer. Adding to the climate of uncertainty, Article 50 is not irrevocable, so it’s also conceivable that the UK could change its mind once the Brexit terms become clearer.

Implications for real estate Immediately following the vote to leave the European Union, the value of the pound fell dramatically and London’s pricey real estate market took a hit. By September, some broad measures of domestic economic health (like consumer confidence and spending) had rebounded, although confidence may stall again once the UK serves formal notice to quit the EU.

In the aggregate, UK housing transactions were slow in 2016 with modest price growth. The long-term implications for real estate, however, remain undetermined and vary by market segment and geography. Investors abhor uncertainty, the dominant factor now challenging the UK’s ability to attract buyers from outside its borders. If Brexit results in a more cumbersome business environment for global business (e.g., restrictions on the movements of goods and people), some companies will opt to leave the country, taking workers with them and adding more vacant commercial space and housing inventories to a dampened real estate market.

Foreign owners of properties used for vacation purposes may be less affected— or perhaps even spot a buying opportunity.

Donald Trump may have earned his fortune in real estate, but his broader policy positions and their implications on U.S. real estate will only begin to take focus now that he’s assumed the presidency.

Much of Trump’s talk during the campaign centered on tougher immigration and trade policies, both of which could hurt the flow of goods and people between the U.S. and the rest of the world. In the weeks following the election, however, this rhetoric assumed a softer tone. Further, even with Republican control of both chambers of Congress, it’s uncertain President Trump’s policies will have unfettered support.

Over the first half of 2017, there is little doubt the U.S. economy will enjoy a stimulus, largely via a combination of tax cuts and government spending on infrastructure and national defense. This in turn should boost consumer confidence and drive the economy higher— along with inflation and interest rates. As long as GDP growth is sustained and comes from more jobs and higher productivity, inflation should be manageable.

A strong economy will also increase the U.S.’s trade deficit in 2017 and invite the possibility of new tariffs and a reduction of trade, which historically have been a catalyst for recession and job cuts.

Unlike the Brexit vote, the populist wave that launched Trump into the Oval Office triggered an immediate post-election spike in the value of the dollar. If sustained, the commensurate increase in property prices for buyers using other currencies will probably slow foreign appetite for U.S. real estate.

Trump’s nationalistic call to turn inward and “Make America Great Again” implied that immigration (and particularly illegal immigration) would face tighter restrictions. Whether such restrictions are carried out and negatively impact home buying remains to be seen.

For U.S.-tax-paying residents, tax reform is another potential agenda item that could impact real estate ownership in various ways, including possible changes in the mortgage interest deduction, property tax deduction, and exemptions on capital gains from the sale of a home. Commercial real estate may see changes to the like-kind exchange tax deferral and the ability to depreciate commercial real estate assets.

One hallmark of U.S. real estate, regardless of who holds the presidency, is the fact that personal property rights are held sacred— and those rights are extended equally to foreign nationals. Often, geo-political events in other parts of the world can tip the scales in such a way that a safe haven in U.S. real property still attracts inbound investment, in spite of other disincentives.

Brexit and Trump may have grabbed the most headlines last year, but several other important political events with populist overtones could also have major implications on the global economy and international real estate developments.

In December of last year, Italian voters rejected Prime Minister Matteo Renzi’s constitutional reforms, prompting him to step down. While the populist Five Star movement—which promotes an anti-EU, anti-establishment and anti-austerity agenda—campaigned strongly against the referendum, Five Star was not Renzi’s only opposition.

Some factions of Renzi’s own Democratic party and several former prime ministers also voiced their objection to the reforms, which would have streamlined government by reducing the number of senators and increasing the prime minister’s power. Ultimately, the referendum boiled down to a vote of no confidence in Renzi’s leadership.

A founding member of the EU, Italy has relied heavily on EU support to prop up its fragile banking system and heavy public debt load. Following the defeat of Italy’s referendum, the euro lost more ground than it had with Brexit. Without solutions that ease market volatility and placate fears, Italy could slip back into recession. AUSTRIA

In another important December 2016 vote, Austria’s moderate leader Alexander Van der Bellen achieved a narrow victory over his far right rival Norbert Hofer of Austria’s Freedom Party. Hofer ran on a platform of restricting immigration and strengthening Austria’s borders, although the Freedom Party would also like to see Austria leave the eurozone and the EU.

In 2017, several major elections will further test Europe’s ability to remain united, starting with a Dutch general election on March 15. Due to the country’s fragmented political party system, Geert Wilder of the populist Freedom Party could pull off a victory with just 28 percent of the votes, although he may struggle to find enough coalition partners to form a government.

Always mildly skeptical of the EU, it appears that the Netherlands is tilting further in this direction. Much of the campaign talk has centered on the economy, migration and the healthcare system.

Numerous forces are at play leading up to France’s May 7 presidential election, especially following Socialist president Francois Hollande’s decision to step back from seeking a second term, due to low approval ratings.

Le Pen prefers renegotiating the EU’s founding treaties over completely breaking from the alliance. Even if she doesn’t win, support for her nationalistic voice in French politics is another clear sign of populist unrest with the status quo.

Germany will hold its next national election as early as August 27 or as late as October 22. Chancellor since 2005, Angela Merkel will be seeking another term. She is expected to retain power, but will have to contend with evolving popular opinion among her own Christian Democrats as well as growing support for populist movements. Most noteworthy, Alternative for Germany, first founded in 2013 as an anti-Eurozone party, has had a strong showing in recent elections and now has a presence in 10 of 16 state Parliaments. If Alternative for Germany secures more seats in the general election, it will be harder for Merkel to press her pro-EU agenda on issues such as subsidies to struggling partners like Greece and Italy, and cross-border immigration.

Putin may not be running for president again until 2018, but his country’s efforts to shape elections outside its borders in the form of targeted cyber attacks and disinformation campaigns is being called into question. Following its annexation of Crimea and ongoing meddling in Ukraine and Syria, there are good reasons to scrutinize Russia’s motives.

Nationalistic populist candidates have tended to be more friendly to Russia, lessening the likelihood of retaliatory sanctions. But populist movements also run the risk of destabilizing Europe, making the continent more vulnerable to outside aggression.

1Details for each country profile were culled from multiple U.S. and European news sources. Note that this information is time sensitive and subject to revision as events unfold in each market. For questions on the source of any particular fact, please contact cips@realtors.org. 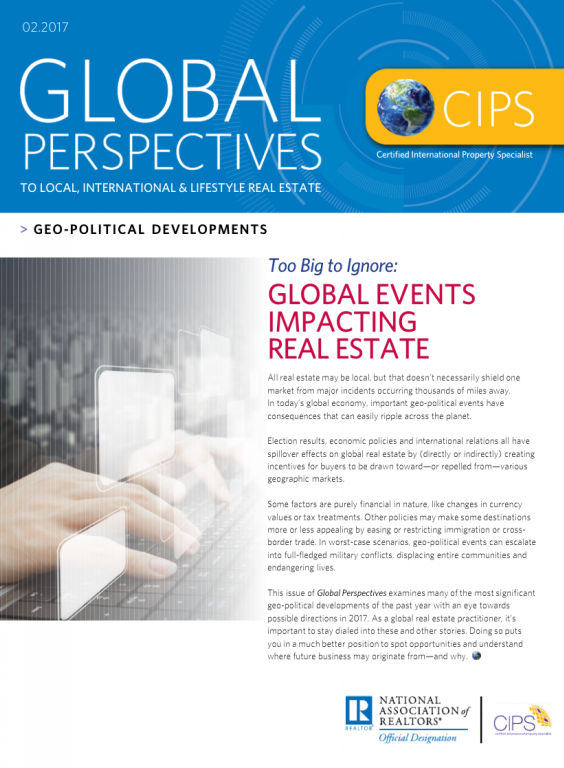