As efforts to combat terrorism have mounted—including blocking terrorists’ ability to finance their activities via real estate money laundering—spillover effects are being felt throughout the luxury property market, long home to transactions cloaked in privacy.

Wealthy buyers frequently use shell companies to take advantage of legal investment and tax strategies—or simply to maintain their privacy. However, these shell companies may be used in money laundering schemes that are designed to hide corruption and shelter criminal activity, including terrorism.

In and of themselves, shell companies are perfectly legitimate. They can be created in the names of accountants, lawyers or relatives, making it nearly impossible to establish money sources. Also, shell company ownership can be shifted at any time without updating property records. Further, since many high-end transactions are made in cash, ownership can’t be traced through mortgage documents either.

Typically, the first and most important layer of control for anti-money laundering (AML) and anti-terrorism financing (ATF) rests with banks and other financial institutions. However, depending on where you practice, real estate professionals may also be subject to compliance with AML and ATF regulations.

How Significant is the Threat?

In some markets, like London, a major influx of global cash has fueled a high-end real estate boom. Unfortunately, strong international demand for luxury property—often with a commensurate spike in the prices of more moderate homes—can also invite scrutiny.

Case in point: In March, 2015, Transparency International UK issued a report titled, “Corruption on Your Doorstep: How Corrupt Capital is Used to Buy Property in the UK.” Among the report’s findings: 36,342 London properties totaling 2.25 sq. miles are held by offshore haven companies.

While offshore ownership doesn’t automatically imply corrupt activity, the report also stated that since 2004, over £180 million of UK property had been brought under criminal investigation as the suspected proceeds of corruption. Transparency International UK promotes ten recommendations to “end this crisis,” starting with full disclosure of offshore ownership.

Since publication of the report, UK Prime Minister David Cameron weighed in on the side of transparency, saying “The UK must not become a safe haven for corrupt money from around the world.” He advocated for the creation of a central register of land owned by overseas companies, although it could be months before any measures actually take shape.

To be sure, there have been several high-profile cases of dirty money flowing through London’s luxury market and concerns are growing. But there are also concerns that crackdowns could prompt negative, unintended consequences, potentially triggering a market collapse.

Transparency aside, UK politicians have stepped up efforts to eliminate certain tax privileges enjoyed by “non-dom” owners of residential property, including the use of offshore companies to avoid inheritance taxes. It may be reasonable to assume that slowing overheated property markets and creating new revenue sources are stronger drivers behind the latest measures.

Throughout 2015, The New York Times published a series of articles under the banner “Towers of Secrecy” which examined the people behind shell companies purchasing high-end Manhattan condos. The Times found that almost half of the most expensive residential properties in the U.S. (over $5 million) are now purchased anonymously through shell companies—a fact that may or may not relate to illicit activity. Among the individuals and transactions featured in The Times, perhaps the most noteworthy is Jho Low, a Malaysian financier with close ties to the family of Malaysia’s prime minister, Najib Razak. Low spent over $140 million on five luxury properties in New York and Los Angeles and Razak now faces a corruption inquiry by the U.S. Department of Justice.

On the flip side, many captains of industry and notable celebrities have also been owners of Manhattan’s luxury high-rise condos. At Time Warner Center alone, there are at least 17 owners that can be found on Forbes magazine’s annual list of the world’s richest people. Celebrity owners have included singersongwriter Jimmy Buffet and Patriots quarterback Tom Brady.

The developers of Time Warner Center actively promoted ownership beyond the U.S., with 26 percent of original sales made to international buyers. Among recent purchases, that figure has grown to 50 percent. The current ownership of 64 percent of the building is now in the hands of shell corporations. (See sidebar.)

The pilot data collection and reporting program, running from March 1 to August 27, 2016, requires designated title insurance companies (but not all title insurance companies) to determine and confirm the identities of natural persons with 25 percent of more ownership in a legal entity (such as an LLC, corporation, or partnership) and to report those names and proof of identity to FinCEN.

The information collected may be used in conjunction with efforts by other law enforcement agencies, but no public disclosure is intended.

FinCEN’s announcement was made as an international Financial Action Task Force (FATF) team arrived in the U.S. to assess the United States’ anti-money laundering regulations. (The FATF was created by the G-7 nations in 1989.)

NAR met with the FATF team and spoke to NAR’s voluntary guidelines developed in collaboration with FinCEN, as an effective means for its one million plus members to be aware of and partner with relevant government agencies when suspicious financial transactions take place.

“In the U.S., real estate transactions typically involve the use of regulated financial institutions, for example through the use of a wire transfer or external financing, and such entities already have obligations under the BSA (Bank Secrecy Act),” explains Bill Gilmartin, NAR Senior Policy Advisor. “Real estate professionals rarely have access to the type of information necessary to detect money laundering activity.” Still, NAR supports AML and ATF efforts and is working to heighten NAR members’ awareness and knowledge of its voluntary anti-money laundering guidelines. (See "Know Your Business")

Recent reports commissioned by the Financial Transactions and Reports Analysis Centre of Canada (commonly called FINTRAC) have placed new scrutiny on real estate professionals, saying “the purchase of Canadian real estate assets with offshore money and/or by offshore persons was noted as a significant risk factor.”

Canadian real estate brokers, sales representatives and real estate agents must report suspicious transactions and transactions involving the receipt of $10,000 or more in cash. Between January 2012 and June 2015, FINTRAC received just eight such reports—which some interpret as gross under-reporting, while others see as evidence of little wrongdoing.

In any case, and particularly in reaction to stronger efforts to combat terrorist financing, FINTRAC has taken steps to increase its compliance examinations within the real estate sector.

Regulation of the real estate industry, with regard to anti-money laundering, varies considerably by country, with Canada imposing some of the strictest compliance orders. In the U.S., agents are not legally obligated to report suspicious activities, whereas U.K. estate agents are required by law to file Suspicious Activity Reports (SAR) with the country’s National Crime Agency.

As global real estate professionals dealing in cross-border transactions and/or luxury properties, it’s essential for CIPS designees, in particular, to stay informed about anti-money laundering developments, not just in your home country, but also wherever your business may take you. 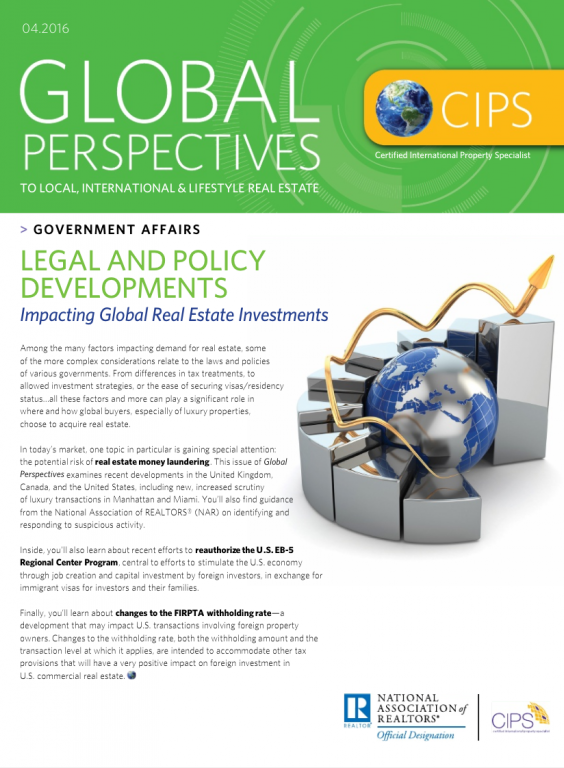