Investment and entrepreneur visas are structured to target:

Many industrialized countries use permanent residency as a “carrot” to attract investors to their shores. Following is a summary of programs in four countries, each of which competes with the U.S. EB-5 visa.

Prior to 2012, Canada’s Immigrant Investor Program (IIP) was among the least expensive and most popular investor visas in the world. The Citizenship and Immigration Canada (CIC) department became so ﬂooded with applicants that it doubled the IIP’s investment threshold. In July of 2012 the CIC stopped accepting new applications due to a reported backlog of 85,000 applicants (investors and family members). Processing times are currently estimated at eight years.

Though the program is on hold, the government is looking at modiﬁcations. As it now stands, applicants must have a net worth of at least C$1.6 million and be able to invest C$800,000 in the Canadian government for ﬁve years (returnable at the end of the term with no interest) or to make a non-refundable payment to the government of C$120,000. The program also looks at the applicant’s educational background, business experience and language proﬁciency. The Canadian government controls how funds are used, directing them towards job-creating projects at the provincial and territorial level.

Canada’s latest tool for attracting wealthy foreign nationals is the StartUp Visa Program targeting entrepreneurs actively engaged in the new economy. Applicants must obtain minimum funding of C$75,000 from angel investors and C$200,000 of venture capital. The program hopes to attract new software companies that have made it past the incubator stage. Canada sent a delegation of angel investors and entrepreneurs to South Africa in November 2013 to actively recruit startups.

The United Kingdom’s Tier 1 Investment Visa is aimed at wealthy foreign nationals who want permanent residency in the U.K. It offers three investment levels; the more the applicant invests, the faster they (and their spouse and children under age 18) are granted permanent residency:

£10M qualiﬁes an investor for permanent residency after two years and for citizenship after ﬁve years;

£5M for permanent residency after three years and citizenship after ﬁve years; and

£1M for permanent residency after ﬁve years and citizenship after six years.

At least 75 percent of the funds must be invested in U.K. government bonds, share capital, or loan capital for active and trading companies registered in the United Kingdom. The rest can be used to purchase U.K. real estate or be deposited in a U.K. bank.

The Investment Visa has no language requirements, however the visa holder must spend more than 185 days per year in the United Kingdom. He or she does not have to be employed, but can ﬁnd employment if desired. Processing time is currently under six months.

The Tier 1 Entrepreneur Visa is aimed at foreign nationals who want to start and run a business. The applicant must have £200,000 in liquid assets in a U.K. ﬁnancial institution or £50,000 in capital from a U.K. funding source (venture capital, seed fund or government department charged with economic development). To secure the visa, applicants must score sufﬁcient points based on funds available to invest (plus additional funds to cover living costs in the U.K.) and English language proﬁciency. Temporary residency is given for three years at which time evidence of job creation must be provided. An individual who creates over ten jobs or shows £5M in annual sales may apply for citizenship after ﬁve years.

The Australian 888 Signiﬁcant Investment Visa was introduced in November 2012. It targets high net worth individuals who are willing to invest at least AUS$5 million in complying investments for a four-year period. In its ﬁrst year, 65 applications were approved generating more than AUS$325 million. The total investment represented by applications applied for in the ﬁrst year, but not necessarily approved, is around AUS$850 million.

Though the visa is intended for any wealthy foreign nationals, its name was chosen with Chinese investors in mind. (In China, the number 888 is associated with wealth.) Currently, processing time is around nine months.

The program does not require job creation. Instead its goal is to infuse capital into Australian companies and the economy, which in turn will stimulate job creation. An accepted investor who spends at least 160 days in Australia and maintains his investment over four years is eligible to apply for a permanent resident visa.

The Australian government recently broadened its eligible investment options to include certain annuity, derivative and mortgage-backed securities and bonds, equity and other Australian corporate debt. Though investments are not guaranteed, there is the opportunity to make a generous return depending on which way the economic winds blow.

Australia also offers Business Innovation and Investment Subclass 188 visas for investors and business owners who wish to establish business operations in Australia. Applicants must be nominated by state or territorial government, are selected based on their skill set and must pass a points test based on business ownership experience and net assets.

In October 2012, Portugal launched its Golden Visa Program as a fast track for non-European Union citizens to obtain a ﬁve-year residency permit. It became extremely popular very quickly because of its ﬂexible investment requirements and the freedom it gives to travel throughout most of Europe.

There are three ways to qualify. The least expensive is to invest in property in Portugal worth at least €500,000 and maintain the investment throughout the term of the visa. Another option is to invest at least €1,000,000 in any Portuguese business or deposit the same into a Portuguese bank account. Finally, any level of investment creating at least ten permanent jobs meets requirements.

The visa is issued initially for one year and then renewed for successive two-year periods. The visa holder must spend at least seven days in Portugal in the ﬁrst year, then 14 days during each of the following two-year periods for a total of 35 days. They also must maintain their original investment in Portugal for the term of the visa.

The Golden Visa gives the holder and their immediate family the right to reside in Portugal and the freedom to travel in the Schengen area, which covers 26 European countries but not the United Kingdom. It also allows children of visa holders to study in European Schengen countries. In the ﬁrst year the visa was available, 356 permits were issued bringing €222 million in new investments to Portugal.

As many as 80 percent of applicants to these countries’ investment visa programs are Chinese citizens seeking to emigrate with their families. China now has more than a million millionaires (assets under management in U.S. dollars) and a growing number of ultra high net worth households. Wealthy individuals from Russia, United Arab Emirates, Brazil and South Africa are the next largest groups applying for investment visas around the world.

Afﬂuent investors look at a great many variables in choosing where to apply. The level of ﬁnancial investment is just one consideration and may not be terribly important for someone who has the resources to clear even the highest hurdles. Processing times are important to many investors and they vary greatly among countries. The number of days per year an investor is required to live in the country can be critical to an applicant’s decision.

There is also the issue of return on capital. Some programs guarantee to refund the original investment after a ﬁxed number of years. The U.S. EB-5 does not make guarantees but instead requires the investor to bear at least some ﬁnancial risk as well risk of failure to create enough jobs for permanent residency approval. The U.K. and Australia investments are open to market risks, with no guaranteed return.

Countries around the world are using visa programs to grab a bigger piece of the international investment pie. There are lots of twists and turns for investors looking for the right ﬁt. Familiarizing yourself with the global competition helps you understand the factors real estate investors are considering and related implications for property searches. 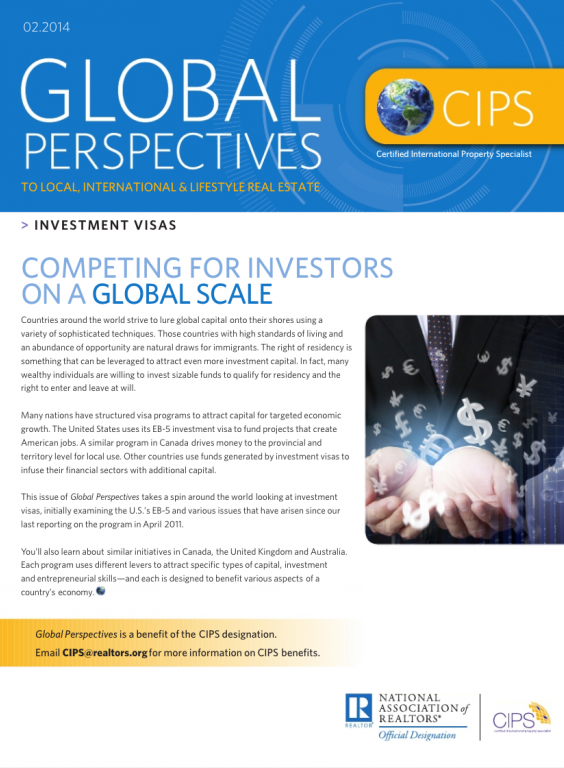