Options for Building Business With Developers

You’re intrigued about getting more involved with international developers, but where do you start? What steps can you take to promote this niche with clients?

Short of traveling to various master plan communities in different destinations, the easiest way to launch your efforts is to let developers come to you. Arrange appointments to connect in the International Pavilion of the REALTORS® Conference & Expo—the next meeting is November 13-16, 2015, in San Diego. (At past events, a number of developers have been in attendance, and they’re eager to meet you!)

Once you’ve had a chance to network with key developers, there are many different ways to build bridges between your sphere of influence and the developer’s communities. Here are three options:

Using a form letter supplied by a developer, Jones sends a mailing to select clients, highlighting the benefits of foreign property ownership and testing their interest.

Two clients respond to the mailing, interested in learning more. Jones refers them to the developer and considers stepping up his marketing efforts.

Option 2: Take It Up a Notch

To promote his role as a global agent, Jones hosts a reception and information session, inviting select clients to learn about buying opportunities at premier vacation communities. At the meeting, he shares details and photos from three developers he’s met.

Two couples decide to take advantage of fly-and-buy promotions. One proceeds immediately with a purchase and invites friends to visit. The other couple is interested, but want Jones to help them evaluate additional buying options.

Jones is particularly interested in one destination and decides to get a ﬁrst-hand look at an attractive project in the early offering stages.

After vetting the developer, Jones decides to sign an agreement and actively promote the project to buyers and other agents. (See article on marketing tactics.)

Over time, Jones' commission grows and he signs on with the developer's next project. He's also purchased a second home for himself and is enjoying more vacation time overseas.

From One Extreme to the Other--More Ways to Get Involved

How far can building a global business around co-marketing international developments take you? “As far as you want,” says Jay West. First introduced on page two of this issue, West is a bi-national REALTOR® licensed in Washington State and owner/broker of Windermere Los Cabos in Mexico.

Originally from the U.S., he’s spent nearly 20 years sourcing properties in Mexico and working with various developers of master plan communities geared to North American buyers. In addition to his formal co-marketing efforts, he promotes Mexico within the Windermere organization by visiting various offices, primarily along the U.S. west coast.

“If an agent in another office learns about a client who’s interested in Mexico, all they need to do is send me the referral. After that, they can be confident their clients are in good hands and will have a positive offshore buying experience,” explains West.

West is not the only one who’s followed this path, and plenty of opportunities remain for other agents. That said, simply tapping into the CIPS Network and knowing who is involved in similar efforts is another way to help your buyers gain professional support when buying abroad, while also earning referral income. 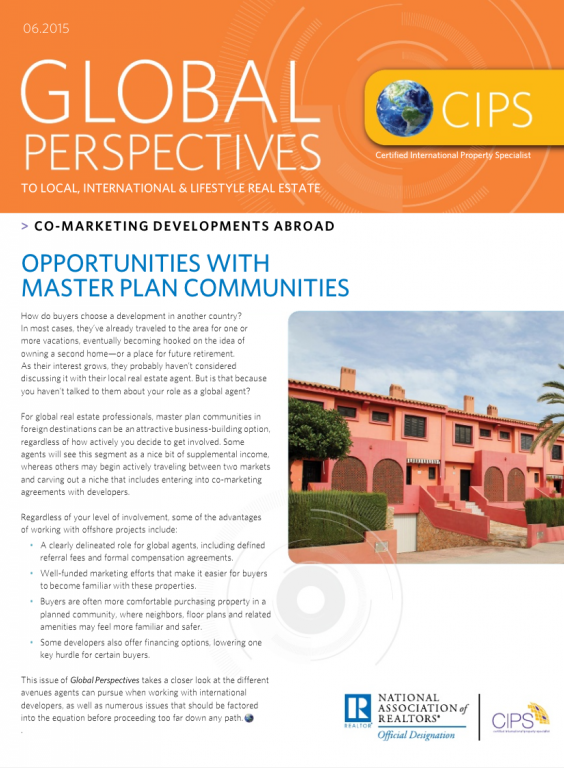