CIPS designees already know that global business touches virtually every corner of the world. Which opportunities are in your market?

NAR’s Profile of International Transactions in U.S. Residential Real Estate 2018 is an excellent starting point for understanding significant trends and spotting your best prospects. Before digging into local details, however, consider several topline takeaways from the report.

Foreign buyers purchased $121 billion of residential property from April 2017 to March 2018, representing 266,800 property transactions. These numbers are off last year’s record highs, but comparable to the previous 12-month period. In addition to facing supply shortages, higher U.S. home prices, and increased competition with U.S. buyers, some international buyers were also challenged by higher prices due to currency fluctuations.

Although five states (Florida, California, Texas, Arizona, and New York) accounted for 53 percent of total residential property purchases made by foreign buyers, a closer examination of buyers by country of origin reveals many other notable destinations.

On the following pages, you’ll find U.S. maps highlighting states that received at least three percent of property buyers from a given country. At lower percentages, international buyers are purchasing in many additional states. Total purchases among the five top countries of origin appears to the left.

When reviewing NAR’s report, note that the term international or foreign client refers to two types of buyers or sellers:

Unsurprisingly, this distinction in residency status plays a significant role in intended property use and is readily observed in the country-by-country profiles.

The Profile of International Transactions in U.S. Residential Real Estate 2018 includes many additional details on buyers from the top five countries of origin, including average and median purchase prices, type of financing used, type of property purchased, and more.

There are also many other ways to identify international buyers living in and visiting your local market, as well as global opportunities linked to international business investments. To pinpoint the best sources for this data, revisit the August 2018 issue of Global Perspectives. (Past copies can be downloaded at www.nar.realtor/global-perspectives.)

For the sixth consecutive year. buyers from China purchased more U.S. property than any other foreign buyers, totaling $30.4 billion in residential purchases. Additionally, Chinese buyers purchased the most extensive U.S. properties, at a median price of $439,100, compared to $292,400 for all foreign buyers.

Among the top five countries of origin, Canadian buyers were least likely to be U.S. residents (72% non-residents). The vast majority of their U.S. property purchases were for vacation and rental purposes. Florida remained their #1 destination (39%), but several other states were well represented, including Arizona (14%), California (9%), New York (5%), and Nevada (5%), among others.

The non-resident share of buyers from the United Kingdom has steadily declined over the past four years, from 615 to 37%. Property prices among U.K. buyers skewed tot he higher end, at a median of $396,200. While Florida and California remain popular destinations (20% and 19%, respectively), many other states were well represented, including Ohio (11%), Illinois (9%), and Arizona (7%).

The vast majority of foreign buyers from India (87%) have established U.S. residency. Compared to the other top five countries of origin, their purchases were more evenly distributed across the country. (Eighteen states shared at least 3% of purchases.) Buyers from India skewed the higher end of the price range (median price of $412, 800), secondly only to buyers from China. 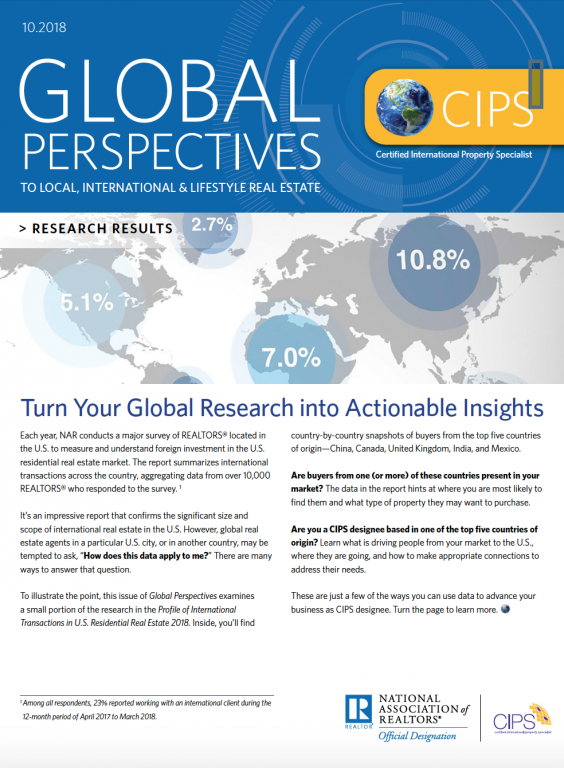 Next Steps: Acting on the Research