Emerging Markets: Where the Action Is

Where the Action Is

Most forward-thinking global investments are now taking place in regions that, until recently, were relatively undeveloped. Nations in Sub-Saharan Africa, Central and South America and Southeast Asia have been attracting foreign investors at a faster rate than the rest of the developed world. Brazil, Russia, India and China, for example, have been hot spots for some time, with investors riding both the highs and the lows in their equity and real estate markets. They have moved on to more risky, less developed markets where perceived ground-floor opportunities exist.

Here is a look at several new frontiers that are currently drawing investors.

Topping the List: Africa The African continent may be the hottest frontier. It has experienced tremendous growth since the beginning of this century and is poised to become a huge consumer market. “Africa is now where China was 20 years ago,” observes Howie Gelbtuch, principal, Greenwich Realty Advisors of New York City. According to the McKinsey Global Institute, between 2000 and 2013, Africa’s real GDP grew at a compound annual rate of 4.9 percent, more than twice its pace during the prior two decades. Forecasters expect further improvements in Africa’s GDP growth from 2014 to 2019, with sub-Saharan economies performing even better than the rest of the continent (6.2 percent versus 5.8 percent). In addition to strong economic growth, the continent is sending out several other strong signals that attract investors, including:

Urbanization: Half of all Africans will live in cities by 2020. Population trends: Africa will have the world’s largest working-class population by 2035. Political climate: Government reforms are supporting business growth in some countries, lowering inflation and promoting economic stability.

With Sub-Saharan Africa’s sixth largest economy, Kenya is an important commercial and financial center for the East African region. The capital city of Nairobi is home to over three million people, including a well-developed middle class. Kenya’s government has strengthened the real estate industry’s infrastructure by digitizing land records and creating more market transparency. Office rents in Nairobi’s well-developed central business district have risen 23 percent in the past year, according to a report by real estate giant Cushman and Wakefield. Modern supermarkets and shopping malls serve consumers in suburban areas. New office space for multinational corporations is being built outside the congested city center. Europe-based Kempinski Hotels, a luxury hotel group, is opening multiple locations. Kenya’s real estate and investment market is already mature enough to support REITs.

Rwanda was one of Africa’s fastest growing economies from 2009 to 2012. While growth hit a speed bump in 2013, its high pace (at least six percent) has resumed and is expected to continue. The nation has significantly reformed its business climate and worked hard to attract foreign direct investment (a major accomplishment, especially in light of the 1994 genocide). Improvements to its road system have helped Rwanda become a regional logistics hub. Retailers from other African nations have opened shops in the capital, Kigali, which also attract shoppers from Uganda and the Democratic Republic of the Congo.

Home to Africa’s largest population, Nigeria’s economy is growing six percent annually. Lagos, the largest city in Africa, is the country’s business center and one of the 25 largest cities in the world. Its population of over 20 million makes it two and half times bigger than New York City. The central business district has matured and newer, modern office buildings are springing up in less congested, less expensive areas. The nation is becoming increasingly urbanized. Its youthful population and developing middle class can afford discretionary spending. Their desire for modern shopping venues has attracted foreign retailers, resulting in new shopping malls, supermarkets and convenience stores. Despite growth opportunities, doing business in Nigeria poses challenges. In addition to safety and security concerns, over 100 languages are spoken across the nation and weak supply channels pose roadblocks.

In West Africa, Ghana has a relatively well-developed office market in capital city Accra, and newer office buildings are rising in areas close to the international airport where there is more vacant land. Accra also has a growing middle class. Modern supermarkets have recently opened, as well as foreign retail chains like GNC, ShopRite and Walmart. Business activity in South Africa, the continent’s most mature market, is focused in Johannesburg, Durban and Cape Town. The Johannesburg office market has been sluggish, but multinational corporations continue to look for space in increasingly modern buildings. Sixty percent of South Africa’s population lives in urban areas and the middle class is well established.

Though Latin America has been a strong performer in recent years, the International Monetary Fund predicts the region will have less than two percent GDP growth in 2014. Brazil, the largest regional economy, moved into recession in the first half of 2014. Mexico, Colombia and Peru are the new hotspots attracting global investment in Latin America.

Mexico’s GDP has slipped from earlier boom years, to 1.3 percent (in 2013) and now 2.3 percent. However, its economy is expected to rebound to an average 3.8 percent annual growth for 2015 to 2019 as President Enrique Peña Nieto implements programs focused on creating jobs and reigning in drug-related violence. One of the engines of job growth and foreign investment is the maquila or maquiladora industry—manufacturers who enjoy special tax breaks under NAFTA and produce electronics, parts and supplies for American companies in the automotive, aerospace and defense sectors. Their exports and foreign investment grew by 50 percent between 2009 and 2012. Another hot spot is hotel expansion. Mexico is one of the most important hotel markets in Latin America. In the past, it was dominated by large Mexican hotel companies within diversified business conglomerates. In the past five years, foreign hotel chains like Wyndham, Marriott, Hilton, Hyatt and Best Western have expanded aggressively in resort areas and Mexico City.

Colombia’s economy grew at a healthy 4.3 percent in 2013 and has remained strong in 2014. The government has instituted policies improving the country’s infrastructure and has supported the residential market by cutting mortgage rates and payroll taxes. Capital city Bogotá has a well-established commercial real estate market. According to Cushman and Wakefield, developers have continued to rapidly deliver premium space, with the overall stock predicted to increase 20 percent over 2013. The occupier market has not been as quick to absorb new inventory, however, creating downward pressure on office rents. Colombia is also a strong performer in shopping center construction. In 2014, it ranked third behind Brazil and Mexico in total gross leasable retail space.

In 2013, Peru’s economy led the region with 5.8 percent GDP growth. The Ministry of Economy and Finance in Peru is predicting continued strong growth of around four percent in 2014. Lima’s market for office space is booming. The city is one of the most sought-out commercial markets in South America. In 2014, office space development has been steady, with the supply readily absorbed by multinational corporations setting up operations there. Class A office properties are in heavy demand and developers are beginning to move into Lima’s less congested submarkets. Cushman and Wakefield reports that new office stock increased 300 percent over a year ago, almost entirely premium space. Rental rates have risen an average 12.8 percent across central Lima and its submarkets in the last year. New shopping center construction is also strong. Cushman and Wakefield reports that Peru will rank second behind Brazil in the addition of new gross leasable retail space in the next year.

Retail development is strong in Chile. While investment in the retail sector has slowed across Latin America for two years, Chile was the only country to post a gain, though modest. Chile may be a relatively small market, but it ranks first in Latin America for total per capita retail space, with Mexico a very distant second.

Despite Brazil’s fall into recession earlier this year, bright spots remain in the property market. A shortage of hotel rooms in the cities, due to lender hesitance, is now easing. Marriott will be addressing the void by developing 12 new properties by 2017. Retail is another area expected to remain strong. Despite its economic downturn, Brazil accounts for 36 percent of shopping center space in Latin America and had the most projects in the pipeline for 2014.

Two other sectors netting foreign direct investment in Brazil are data center space, of which there is little in Latin America, and warehouse space to serve big box and online retailers.

China and India are the key drivers of the Asian economy, but their major property markets are more mature than those in other Asian nations, prompting an increase in foreign investors’ cost of doing business. Investments are now migrating to lower-cost manufacturing centers in other countries. The Economist is forecasting a 4.5 percent increase in GDP for Asia overall, but this average is weighed down by slow growth in Taiwan, South Korea and Japan. India and China will be tapering off considerably from their double-digit growth of the last decades to still-solid rates of 6.4 percent and 7.0 percent, respectively. The biggest winners will be less developed nations like Sri Lanka, the Philippines, Indonesia and Vietnam.

Lately, Chinese investors have been selling properties in China and redeploying funds to other parts of the world. Space in Class A office buildings in China’s top markets is yielding around four percent, compared to six or seven percent for similar properties in other major global cities. On the other hand, foreign multinational corporations are becoming leading buyers in China. For example, financial firms and pharmaceutical companies locating in Hong Kong and Shanghai are purchasing facilities rather than leasing them.

Retail is a bright spot in China. Earlier this year, CBRE reported that out of 39 million square meters of shopping center space under construction in major cities around the world, half is being built in China. Among the top ten global cities for retail construction, eight are in China.

Multinational corporations are also buying properties to consolidate their operations in India. Companies like GlaxoSmithKline, Adobe Systems and Amazon, who have been in India for a while, are deciding that ownership provides a buffer against rising lease rates. They are investing in commercial office space, manufacturing and R&D facilities, and logistics space. The pro-business stance of the new Modi government may also be a factor. Cushman and Wakefield expects a boom in India’s retail segment in the coming years. Its retail market is currently one fourth the size of China’s, but its young and increasingly middle-class population is expected to drive exponential growth. India is second only to China in shopping center space currently in development in the region.

The prospects for countries like Vietnam, Cambodia, Sri Lanka and Myanmar are promising because they favorably compete with China for low-cost export-oriented manufacturing. Cushman and Wakefield predicts demand will be driven by manufacturers in the technology and pharmaceutical sectors seeking lower production costs. However, the central business districts in these countries lack the type of prime office space expected by Western companies. Foreign developers, mostly from Asia, are jumping in to address demand. Across the globe, real estate markets in the emerging economies of Asia, Latin America and Africa present distinct risks, but could generate the best global returns of the coming decades. These markets are truly on the frontier. Informed investors could find opportunities well worth taking, especially when armed with good timing, smart property selection, and a bit of luck. 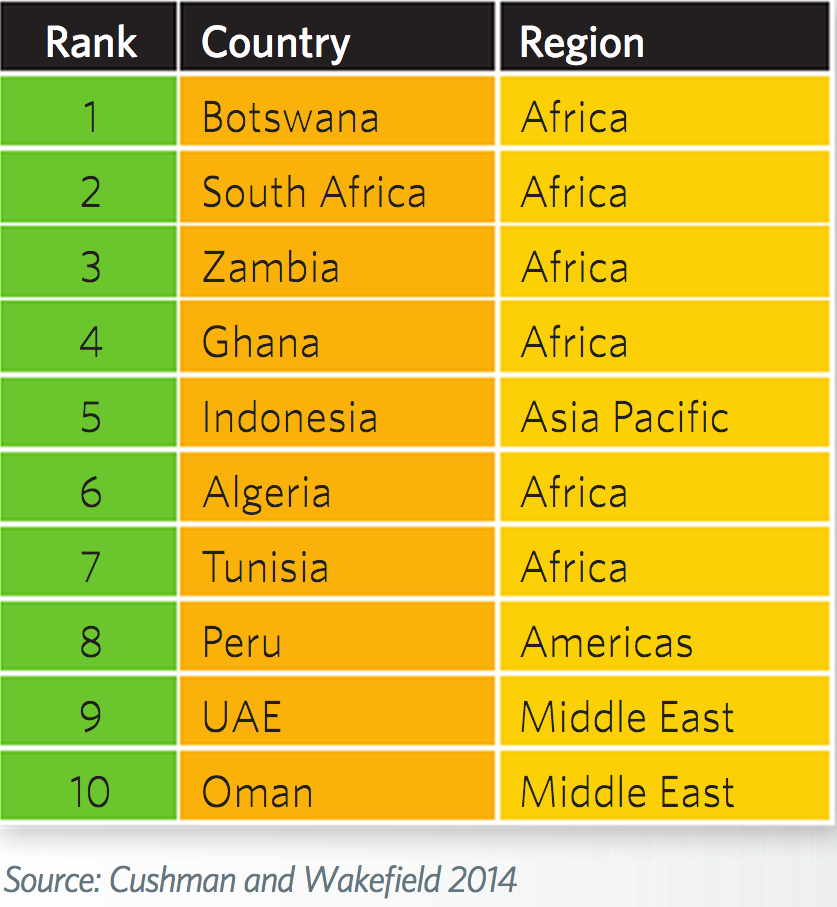