Previous issue
Spring 2014: Will Retail Break Free from the Web?
Next issue

As a result of a Supreme Court ruling in the early 1990s, Internet retailers have largely been exempted from collecting state and local sales taxes on their sales transactions because these tax laws were seen as overly complex and placing too heavy a burden on interstate commerce, unless the retailer had a physical presence in the state.

Since that time, the number of people and businesses using the Internet for e-commerce transactions has grown exponentially, and a large component of these transactions remain tax-free. At issue is the fact that brick-and-mortar retailers must collect and remit state “sales-and-use” taxes, yet many remote sellers – such as catalog and online – only vendors – are exempt from such requirements. As a result, Internet retailers have an unfair advantage over their community-based counterparts, and states are losing out on billions of dollars in much-needed (but uncollected) revenue.

Because of the current treatment of Internet retailers, the amount of sales tax that a state or locality is able to collect will be less than otherwise provided. However, passage of federal legislation allowing states to require Internet retailers to collect sales tax for online purchases – and to level the playing ﬁeld between brick-and-mortar and Internet-based retailers – is gaining ground on Capitol Hill. This includes the “Marketplace Fairness Act” (H.R. 684), introduced by Representatives Womack (R-AR) and Speier (D-CA); and a Senate measure (S. 743) authored by Senators Enzi (R-WY) and Durbin (D-IL).

Passage of H.R. 648 and S. 743 are necessary due to the deteriorating ﬁscal condition of many state and local governments. These budget shortfalls could lead them to opt for higher real estate and other property taxes/fees on consumers and business to make up for this lost revenue.

Going back to 1994, the issue of marketplace fairness has had more than 30 hearings in both the U.S. House of Representatives and Senate, including hearings be-fore the U.S. House Judiciary Committee in both 2011 and 2012.

In May 2013 the Senate passed S. 743. This legislation  would create authority for state governments to collect sales taxes on Internet sales for goods that are delivered to their states, which would level the playing ﬁeld be-tween brick-and-mortar and e-commerce retail businesses while assisting the states in collecting billions of uncollected state sales taxes.

With the passage of S. 743, the fate of Internet sales tax fairness rests with the House. The House bill, which closely resembles the Senate version, has been stalled in the House Judiciary Committee, where Chairman Robert Goodlatte (R-VA) has voiced concerns over the complexity of the bill. While the Chairman recognizes the need to resolve disputes over collection of sales tax on Web-based purchases, he opposes the bill as currently written because it would force businesses “to wage through potentially hundreds of tax rates and a host of diﬀerent tax codes and deﬁnitions.” The bill, he says, “still has a long way to go.” Also, convincing conservative Republicans that the proposal would not amount to a tax increase on online consumers remains another major hurdle for the Marketplace Fairness Act.

Chairman Goodlatte held oﬀ on scheduling a markup last year, but he said he would hold a hearing on the issue in early 2014. The Chairman has released a list of principles for developing his own legislation.

In a January 2014 joint letter sent to Chairman Good-latte, NAR along with hundreds of organizations that collectively represent more than 3 million American businesses – large and small – called for immediate action on the long overdue issue of marketplace fairness.

Citing more than 20 years of inaction and the Supreme Court’s recent decision aﬃrming that this is a matter for Congress to address, the letter urges Congress “to make the 2013 holiday shopping season the last where Main Street businesses must compete at a government created price disadvantage.” 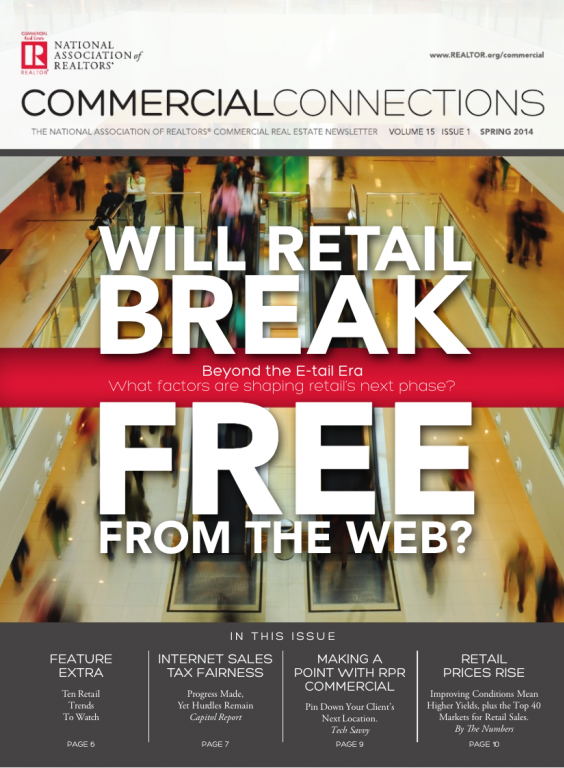 Beyond the E-Tail Era

Making a Point with RPR Commercial