Previous issue
Summer 2017: Empower-Up! Building Opportunities In Your Community & Yourself
Next issue

Many factors drive real estate investment and development, including economic conditions, market demand, and the availability of capital. Studies reveal another critical element now plays a significant role in determining where new real estate projects will be planned and built: proximity to smartly-designed and well-maintained infrastructure. More than ever people are specifically interested in public transit and pedestrian walkways that provide accessible, reliable, and convenient ways to travel between home and work, schools and recreation.

A trend known as transit oriented development (TOD) has been popularized by this demand. The concept centers on building high-density multifamily, office, and mixed-use properties within a defined proximity – usually a one-half mile walking distance – from a rapid transit or light rail station.  Proponents of TOD development cite benefits that include putting undeveloped or underdeveloped properties to more productive uses, slowing the pace of urban sprawl, reducing traffic congestion, and contributing to sustainability through less reliance on personal auto use.

Examples of TOD developments most often can be found in older urban markets with “legacy” transit networks established before auto travel became dominant. In recent years, the concept is taking hold in emerging metro areas where new rail transportation is helping manage growth, provide greater access to businesses and social services, and contribute to the quality of life. Recognized for decades by urban planners as a viable way to design and grow livable and resilient communities, transit oriented developments gaining broader acceptance by municipalities seeking to address mounting issues like affordable housing options in gentrifying neighborhoods and access to more convenient community services and resources.

Like any real estate development, new TOD properties present specific demands to the development team. Working with transit agencies and navigating requirements laid out by local governments are among factors developers must address.

Francis DeCoste, COO of Transit Realty Associates of Boston, pointed out one initial issue developers encounter centers on the mission of transit providers. “There is, of course, a transit component to a TOD project” he said.  “So, the challenge is that these projects have to be coordinated with transportation agencies. Their main business is moving people and not developing real estate. Both parties have different types of objectives, and getting those objectives coordinated is one of the biggest challenges developers face.”

Most TOD projects, DeCoste added, require a high degree of density within the overall development to help address any related infrastructure costs and may include securing air rights needed to build the project. That can lead to challenging negotiations with the local government during the initial planning stages. “When going through the governmental approval process, developers have to make municipalities understand what’s needed to develop these sites as a TOD property,” DeCoste said. “The developer may have to give up some density, which they may or may not want to do. And, there’s the idea that a TOD property has reduced parking; developers have to get the municipality to buy off on the idea that it’s okay to have less parking.”

The foundation of TOD development centers on providing convenient public transit options to reduce automobile ownership and the need for lots of parking.  That makes sense in dense, older metro areas with established transit networks like Chicago, which in 2015 enacted an ordinance that includes eliminating parking restrictions for mixed-use properties built within a quarter-mile of an existing Chicago Transit Authority or Metra rail station.

But the concept also is taking hold in still car-centric markets with recently-completed public transportation networks. That’s the case in Orlando, where the SunRail commuter line now operates 12 stations within three counties. Preliminary guidelines for planning the line, which opened in 2015, included detailed “TOD community sketchbook” documents to give the communities served a vision of potential redevelopment projects near SunRail stations.  A Phase 2 is underway that will add four more stations to expand the rail network and help guide adjacent multifamily and other commercial property development.

“Transit oriented development is really starting to happen here in Orlando,” said Cynthia Shelton, CCIM, CRE, CIPS, Senior Managing Director of Capital Markets at Landqwest Commercial, a diversified central Florida real estate firm. “These kinds of properties give rise to the idea of the walkable city. People like my 27-year-old daughter want to live in a downtown area where she can say, ‘I work there, I play there, and I take my dog for walks there.’”

A recent surge in new and remodeled properties in the downtown area of Lake Mary, which boasts a SunRail station, was cited by Shelton as an example of the impact the rail line has made on the real estate market in that suburban Orlando city.  Developers of properties near the Lake Mary City Hall received tax credits for such incentives as design setbacks or incorporating fewer parking spaces into the property.

“Some new development had been going on before the SunRail station was built, but now developers have really embraced it,” she said. “Today, it’s not just three blocks from the station to City Hall, it’s three blocks to the new restaurant, the yoga studio and the office.”

The Outlook for TOD

Expect the fundamental idea of TOD – using transit as a major factor that drives new development and energizes cities – to continue to gain acceptance. Real estate professionals contacted said the industry is becoming increasingly aware of the role transit oriented development projects play in urban planning and development today, and studies have revealed people support the concept.  A case in point: The “2013 Community Performance Survey” from the National Association of REALTORS® showed 60 percent of respondents favored diverse, walkable communities that are closer to employment.

NAR offers an incentive to get TOD type of developments underway through the Smart Growth Grants program, designed to encourage REALTORS® and communities to build responsible communities that offer a range of housing options, are walkable and include various transportation options.

Perhaps the most compelling factor regarding the future of TOD properties centers on housing preferences made by millennials.  A survey, “Transit Oriented Development in America,” produced by infrastructure consultants HNTB Corporation, found that 70 percent of millennials would pay more in rent or mortgage to get to work or play without using a vehicle. 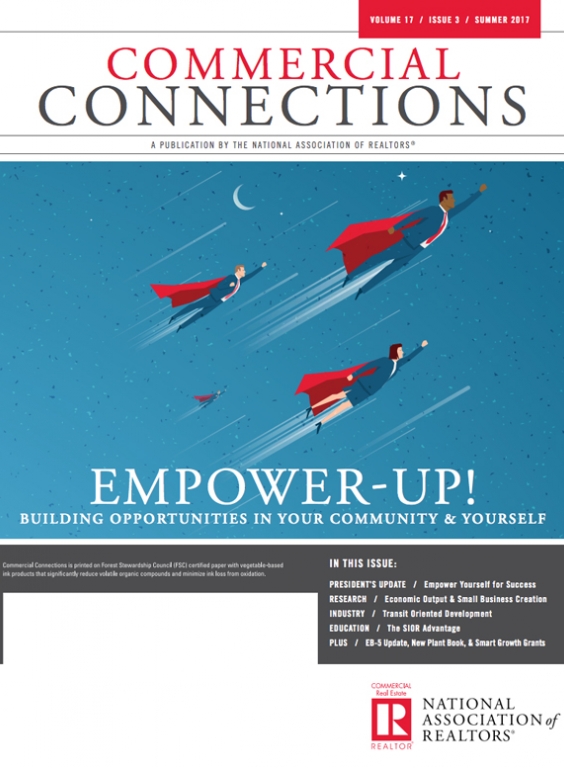