Previous issue
Winter 2014: Invest in Yourself and Strengthen Your Foundation
Next issue
Home
Commercial Connections

CC: In the 114th Congress, what legislative and/or regulatory issues do you expect to be top priorities?

ES: We'll focus on protecting Section 1031 Like-Kind Exchanges, and plan on spending time educating Members of Congress on the importance of that provision to both commercial real estate and the economy as a whole. We expect a lot of unfinished business to be introduced again – such as the Marketplace Fairness Act, which allows states to levy state taxes on online purchases. Also, we expect to see lawmakers get more involved in new issues such as the commercial use of drones and crowdfunding regulations.

SS: From a regulatory perspective, many provisions of the Dodd Frank Act will become final in 2015, which will impact lending. We are excited to see the launch of SBA One, a program designed to streamline the application process for SBA loans. We expect to see the finalization of the FASB Leases Project, and anticipate that FASB will retain its own lease accounting standards and not converge with the IASB. There will be more conversation about Waters of the U.S. and we hope to see some progress on changing the definition.

CC: What hot advocacy issues pose the most risk to commercial practitioners nationwide or regionally? And what issues have the most potential to benefit them?

ES: The Marketplace Fairness Act legislation would help to level the playing field between traditional brick-and-mortar stores and online retailers, resulting in more storefront businesses bringing money back to local shopping centers, which will be a big help to our commercial members.

SS: This year we will be focusing on banking and lending and the rule changes surrounding that. Some changes will be risks, others will be opportunities.

CC: NAR held a number of Hill visits with commercial members this year — can you give us an update on those meetings?

ES: Recently, the Coalition to Insure Against Terrorism (CIAT) had a 'Hill day,' where member organizations (NAR is a steering committee member of CIAT) visited key Congressional offices to urge a long-term reauthorization of the Terrorism Risk Insurance Act (TRIA). Dan Wagner of the Inland Real Estate Group, Inc., 2015 Chair of the Commercial Legislative & Regulatory Advisory Board, attended representing commercial members. These types of visits are always helpful to raise the profile of the issue and NAR as an organization on the Hill.

CC: Describe what a typical day is like for you and the other government affairs staff.

ES: A LOT of reading! We have to stay current on a lot of issues, and sometimes things can turn surprisingly fast in D.C. Along with publications including The Hill, Politico, and the WSJ – I keep up with what's being discussed on the House and Senate floors while they're in session. I also attend Congressional hearings on topics that affect Commercial Real Estate – it's good to be there in person when it's an important issue, to represent NAR and show that we are keeping track of things.

CC: What are some of the ways members can get more involved with national issues on a local level?

ES: The easiest way to participate is by participating in the Calls for Action, which have a big impact in D.C. Working with their GADs, FPCs, and state and local chapters is a great way to start, and they should always feel free to reach out to us in the D.C. office to ask questions about issues.

SS: We encourage REALTOR® members to develop relationships with legislators, especially when they are in-district. Becoming educated about an issue and getting involved on the NAR committee that handles that is a good way to start. Make yourself the local expert on the issue you're passionate about. 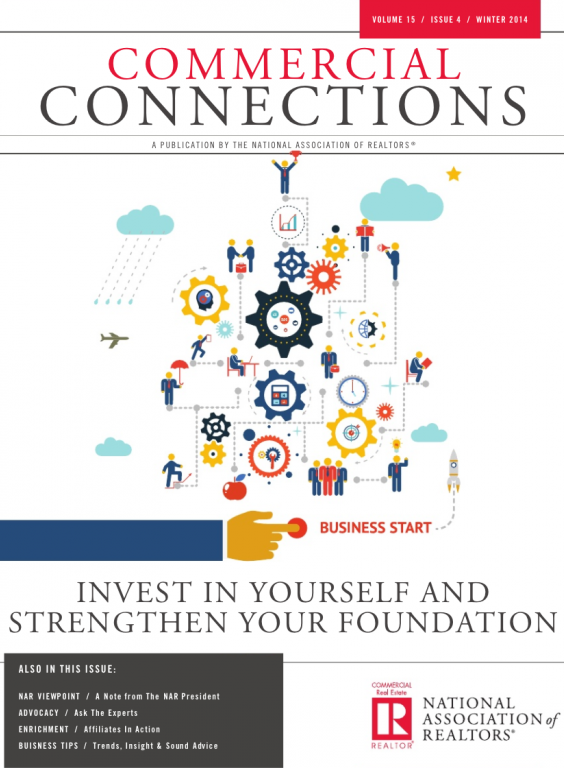 A Note From the President, by Chris Polychron, GRI, CIPS, CRS