Farmland preservation programs sustained a prolonged funding drought during the Great Recession, forcing many to cut spending on protection of farms threatened by development.

Now preservation funding is coming back, but so are post-recession development pressures that threaten to overwhelm farms from New England to the West Coast.

“It’s cooled a little bit in recent years, but certainly that development pressure is always there,” said Hope Gruzlovic, policy and communications manager for the New Jersey Agriculture Development Committee.

“Being in a state like New Jersey that’s densely populated … I think it lends more urgency to our efforts to preserve farmland,” she said. “That’s why we’ve seen the public has consistently supported funding for farmland preservation and open space preservation because they think that’s important and we only have a limited time to do that.”

The American Farmland Trust (AFT) reported earlier this year that funding of farmland preservation programs is down 39 percent since 2008.

“But if states had committed the same level of funding they had in 2008, we would have saved an additional 358,000 acres of agricultural land and purchased 2,000 additional farmland conservation easements,” he said. “That’s the gap AFT is working hard to narrow with our state partners.”

The question for farmland preservation advocates is whether funding for their programs will be sufficient going forward to prevent an accelerating loss of farms to development.

“While there is some optimism in our survey, the United States has been losing one acre of farmland every minute to development,” McElwaine said. “In the face of a global need to double food production by 2050, that is unacceptable. We believe state, local and national governments must step up to the plate and do more to protect land and keep farmers farming.”

Between 2002 and 2007, according to the U.S. National Resources Conservation Service, more than 7.5 million acres of prime farmland, an area the size of Maryland and Delaware, were converted to non-agricultural uses.

The states, local government and nonprofit trusts, supported by federal grants, have spent a total of more than $5 billion to preserve more than 5 million acres of farm and ranch land since the farmland preservation movement took off in the late 1970s, according to AFT. The federal Farm and Ranch Protection Program (FRPP) contributed about $1.1 billion of that total, and 75 percent of the area it preserved was ranchland, not farms.

“I think the South is lagging behind,” said Jennifer Dempsey, director of the AFT Farmland Information Center. “I think the Corn Belt may be worse.”

Another factor clouding the future of farmland preservation is uncertainty about funding for, and the direction of, federal protection programs. In this year’s Farm Bill, Congress consolidated existing farm and ranch, wetland and grassland protection programs into a new entity. Cuts in federal spending on the consolidated program are considered likely.

“It’s too bad that there may be less money available to invest in farmland protection,” Dempsey said. “It’s also not clear what will happen with the new consolidated program.”

She said advocates fear the new federal approach could divert funding from preservation programs that keep farms in protection to wetlands preservation, which takes land out of production.

The federal government budgeted about $150 million for the FRPP last year. The federal program has provided funding to help purchase more than 4,200 conservation easements, protecting more than 1.1 million acres. A substantial portion of that land, however, is ranchland in Colorado, Wyoming and Montana.

Officials of some local farmland preservation programs say they want no part of the federal program.

“The federal programs are relatively the new kids on the block, and they want to push their weight around,” said John Zawitoski, who runs the Montgomery County, Md., farmland preservation program. “They want to tell the counties who have been doing it for 30 years how to run their program. We don’t rely on any federal funding.”

Government programs and nonprofits offer farmers a variety of tools to preserve the land they farm, including lower property taxes. Advocates say the most effective programs are based on paying farmers to farm — not develop — their land.

Many preservation programs rely on transfers of development rights (TDR), buying the rights to develop the land from the farmers who own it. A number of those programs allow farmers to sell their rights to developers who transfer those rights to other properties they are developing under conditions set by local officials. Developers frequently use those rights to increase housing density at their projects.

Lancaster, located in the Pennsylvania Dutch country about 60 miles west of Philadelphia, has preserved about one-quarter of the 400,000 acres of farmland in the county.

“We still have 75 percent left to do, as we like to say,” said Karen Martynick, executive director of the nonprofit Lancaster Land Trust.

The Trust and the county’s Agriculture Preservation Board run the preservation programs in Lancaster County. Both rely largely on purchasing conservation easements from farmers who agree to protect their land from development.

“The farmer gets a payment and then the development rights are in effect extinguished on the property,” said Tom Daniel, a planning professor at the University of Pennsylvania and former director of the Lancaster County program. “The farmer can use the property for farming, but he can’t put up a hotel or a Walmart.”

Farmland preservation programs typically rely on a point system assessing factors such as soil quality and proximity to urban areas to determine which farms rise to the top of the purchase list.

She said the Trust was created in 1988 to work with Amish farmers in the county to preserve their land.

Martynick said the county pays up to $4,000 per acre for conservation easements, but the Trust is limited to payments of $1,000 per acre.

Why would Amish farmers accept payments of $1,000 per acre from the trust when they could get four times as much from the county?

“They’re obviously not doing it for the money,” Martynick said. “They’re doing it because they care about the land. They don’t like to deal with government. The other part of it is the county has a long waiting list.”

Montgomery, a suburban county north of Washington, D.C., in Maryland, has a rich agricultural heritage, but is also the 10th richest county in the country in terms of median income, according to a recent survey.

Since Montgomery County launched its preservation program in 1978, Zawitoski said, it has preserved about 73,000 acres of farmland, about 93 percent of all available farmland, or approximately 23 percent of all land in the county.

He said farmers typically negotiate the sale of development rights to developers before they apply for conservation easements from the county. The financial rewards can be substantial for farmers who transfer their development rights, Zawitoski said.

“At the end of the day he still owns that farm, and it doesn’t prevent him from selling that farm in the future to a guy who still wants to farm,” Zawitoski said.

He said he showed a farmer who was considering developing his 352-acre farm that he could make a lot more money by transferring his development rights and continuing to farm the land.

“He said, ‘I’m a born again conservationist. Where do I sign on the dotted line?’” Zawitoski said.

Montgomery County raises funds to pay for the preservation program by imposing a 5 percent tax on the sale of farms taken out of agricultural production.

“There’s not that much land left that’s going to convert, so we’ve had to go after things like alternative revenue sources,” Zawitoski said.

A Farmland Information Center study of the federal FRPP confirmed that most farmland protected from development through use of conservation easements stays in farming. The study reported that 96 percent of landowners said at least some of their protected land was in production and nearly half said they were growing crops on all of their protected land.

It said 84 percent invested proceeds from the sale of easements on either farm operations or buying additional land to farm. “Easement proceeds spent on agricultural purposes tended to be spent locally, bolstering the entire agricultural sector in communities with protected farms,” the study said.

Selling conservation easements does not, however, mean that the land must be farmed, and that can be a problem for programs intent on keeping farmland productive.

“People were investing in a beautiful farm in Vermont, but not necessarily for farming,” said Nancy Everhart, agriculture director for the Vermont Housing and Conservation Board. “We were looking around for other tools to incorporate into our easements.”

If a Vermont farmer wants to sell his or her land to an easement buyer who does not meet the Internal Revenue Service definition of a farmer, the state has the option to buy the property for its agricultural value.

“The goal for us was to create an incentive for farms to stay in farm ownership,” Everhart said.

Keeping farms in the family after the patriarch dies, helping operators buy the farms they lease and encouraging young families to go into farming are ongoing issues for farmland preservation programs.

Purchasing conservation easements from farmers helped to accomplish all three of those goals in Kane County, Ill., about 60 miles west of Chicago, said Janice Hill, the county’s farmland protection manager.

“If only one member of the family wants to continue farming after the death of the patriarch, he or she can sell a conservation easement to raise funds to pay the other children for their interest in the land,” Hill said.

“One of the things that’s exciting in Vermont is the number of farms is actually growing; more young people are going into farming,” Everhart said.

In addition to buying easements, the New Jersey program focuses on helping farmers find markets for the food they grow.

“It’s not just enough to preserve farmland, we need to make sure farmers can be successful on it,” Gruzlovic said. “To be successful they have to have markets.”

Hundreds of land trusts all over the country participate in farmland preservation programs, but most are small and many rely on donated land, not purchases of conservation easements. Most of the land preserved in trusts is ranchland in the West.

The Farmland Information Center released a survey reporting that 52 trusts preserved 95 percent of the land protected by trusts.

One of the major nonprofits, the Trust for Public Land (TPL), has preserved 86,000 acres of farms and ranches in 15 states. TPL received $35 million in federal FRPP grants and $45 million from other sources, largely state grants, to purchase conservation easements.

In Colorado’s Upper Arkansas Valley, TPL worked with local trusts to preserve the 700-acre Hutchinson Ranch, which has been owned by members of the same family for six generations, since the 1860s. The Hutchinson Ranch was one of the last working cattle ranches in an area becoming popular for second homes. Today, the Hutchinson family has planned conservation easements that permanently protect 650 acres and that allow the family to continue working the land, while ensuring it can never be subdivided or fragmented.

“Overall I think we are pretty optimistic,” said Tim Ahern, TPL communications director. “Farmland preservation over the years has been pretty popular with the public because it’s good for the land and it’s good for the farmers.” 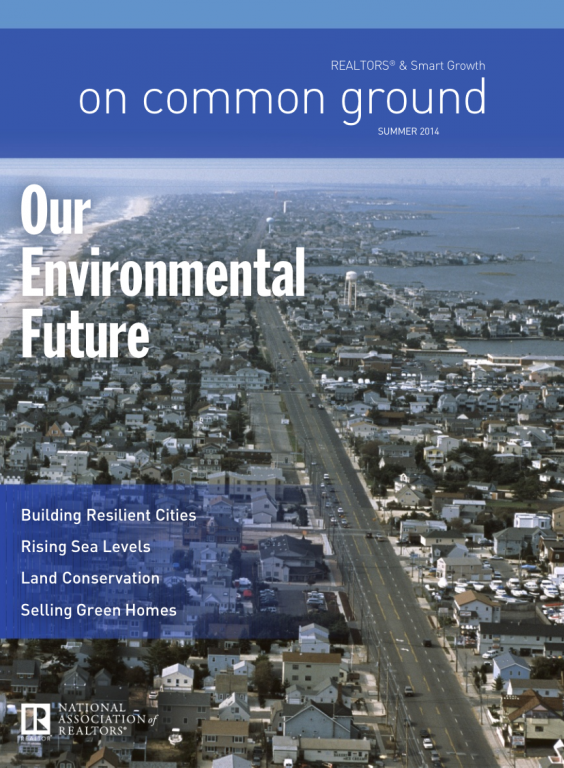 How is California’s Planning Shakeup Shaking Out?