Smart growth, which emphasizes walkability, higher density, and transportation access as ways to more effectively use land, is not a new concept. Yet, the significant impact that smart growth can have on commercial property demand and values is often overlooked by many commercial practitioners.

“When I was asked to chair the Atlanta Commercial Board of REALTORS’® (ACBR) Community Growth Committee in 2005, it was a real educational experience for me. I realized that Atlanta needed to find a different way to make growth and development happen,” says Marjy Stagmeier, president of TI Asset Management and 2011 Chair of the Atlanta Commercial Board’s Government Affairs Committee.

Stagmeier soon embraced smart growth ideas, and she and her committee set out to create a common approach to educating fellow REALTORS® and community leaders about the benefits of higher density mixed-use and transit-oriented development.

It worked. Today, the Commercial Board has adopted quality growth as one of its principal legislative priorities, says Robert Broome, the group’s government affairs director. “REALTORS® are the best spokespeople for these issues because we see the impacts in both our communities and our businesses,” says Stagmeier.

Many of the board’s early smart growth initiatives focused on education and liaison with public officials. But in 2011, the ACBR had the opportunity to take the next step—to actively participate in turning a smart growth plan into a viable commercial/residential development.

The property in question was the Edgewood/Candler Park MARTA station. Located in Edgewood, an older suburb of mostly single-family homes southeast of downtown, the 1979-vintage station offered a prime opportunity for redevelopment, says Dan Reuter, land use chief for the Atlanta Regional Commission (ARC).

“There is a lot of unrealized potential near many of our rail stations, and with the growing market of Atlanta buyers and renters who want to live in urban, walkable locations, many of the stations offer a great place to provide more transit-oriented development (TOD) real estate,” he says.

In Edgewood’s case, the biggest unrealized asset was a large, but underutilized, parking lot on the seven-acre site. Even at rush hour, the lot was never more than 35 percent full since many of the 1,200 to 1,400 weekday riders walked, came by bus, or were dropped off. The fenced parking lots and deteriorating sidewalks also created a barrier between the station and an adjacent park and isolated the station from nearby multifamily and retail sites.

Edgewood also presented an opportunity because extensive research had occurred on the possibility of TOD development by local community groups with funding from the Zeist Foundation and the Atlanta Livable Centers Initiative.

In hopes of moving the planned TOD project forward, ARC had submitted a proposal to HUD’s Sustainable Communities Regional Planning Grant in 2010, but had not received funding. The project stalled. Then serendipity took a hand. ARC, along with other Atlanta community groups including Southface Energy Institute, were working with Bill Lennertz, executive director of the National Charrette Institute, to learn how to conduct charrettes.

As part of the training, Lennertz proposed working on a real project. ARC suggested Edgewood. A charrette, a collaborative process that allows a variety of project stakeholders to participate in local planning and design decisions, is “very well-suited to complicated projects like transit-oriented development because it allows for collaborative solutions,” says Lennertz. Reuter favors the technique because charrettes are “a great way to focus on the actionable steps that can lead to real development.”

The fit was good, but funding the charrette was still a problem until the Atlanta Commercial Board of REALTORS® stepped up. The board contributed $10,000 to help finance the Edgewood charrette. The funds came from a Smart Growth Action Grant, an ongoing NAR initiative that supports REALTOR® initiatives focused on education and projects affecting local land use.

Although the program has existed for several years, the 2011 grant to the Atlanta group was the first grant to a commercial board. Additional funding was also provided by the Home Depot Foundation.

A Collaborative Approach To Smart Growth

The Atlanta Board’s participation went well beyond money, however. Representatives played a key role in making the event a success. “Part of the concept of a charrette is that you reach out to as many constituents as possible and the real estate and building community is a big piece of that,” says Robert Reed, sustainable communities design director for the nonprofit Southface Energy Institute and one of the driving forces behind the Edgewood charrette.

Another vital REALTOR® contribution was compiling and analyzing market data to help direct design decisions during the Edgewood charrette. “We require a market analysis as part of our smart growth planning process because we want the community to understand what the market potential is for a site and not anticipate uses that aren’t feasible,” says Reuter. Data supported the proximity to transit as an important piece of the diverse, affordable housing the Edgewood residents wanted.

“Housing expenses in our region are affordable, averaging 23.7 percent of personal income, according to the Center for Neighborhood Technology,” says Broome. But when you factor in transportation costs, suburban counties that lack public transit all exceed the 45 percent of income range for housing and transit that’s considered affordable.

The four-day charrette, which was facilitated by Lennertz, went “very smoothly,” he says, in large part because of all the strong preplanning and research done prior to the event. “It was also critical that we had all the right people there—community leaders who had a real interest and people who were impacted by the outcome,” he adds. ARC plans to use the Edgewood project as a model for future charrette planning sessions on Atlanta TOD projects.

Two design variations emerged from the charrette process. Each called for three-to-four story residential buildings incorporating approximately 300 rental units. Between 10,000 and 16,000 square feet of restaurants and other retail and between 5,700 to 7,100 square feet of office spaced rounded out the designs. The site would become a destination for home, work, and play instead of a concrete island.

Both designs also reflected the community’s desire for green space and civic areas. One final concept called for a large central commons ideal for farmers markets and concerts. The second approach reduced the size of the commons and added two pocket parks and more street front green space. Both consolidated transit parking into a garage structure and kept bus access lanes unchanged, a major concern for MARTA.

To view a more complete summary of the Edgewood design and the entire charrette process visit the Atlanta Regional Commission website. http://bit.ly/atlantaregionalcharrette

Still Pushing For Smart Land Use

While the Atlanta Commercial Board’s role in conducting the Edgewood charrette was important, its activities after the fact were even more critical in moving the smart growth initiative forward. “We didn’t want to just complete the design and have it sit on a shelf,” explains Broome. The board lobbied to ensure that the Edgewood final report was incorporated into the city’s comprehensive development plan.

“When the new comprehensive plan was first passed last fall, the charrette decisions weren’t included. We had to act fast and make a very strong case to the City Council to amend the plan and incorporate the project,” says Broome. “We need smart real estate people to help our public officials understand the smart growth conversation,” says Reuter.

Now, with an Edgewood transit-oriented project securely part of Atlanta’s future, MARTA is negotiating with an active local developer, Columbia Residential, to acquire and develop the site through a public/private partnership with the Atlanta Development Authority. In a few years’ time, Atlanta’s commercial REALTORS® may be taking on a new role at Edgewood—that of leasing brokers.

Good for the Bottom Line, Too

Smart growth initiatives like the one supported by the Atlanta Commercial Board of REALTORS® aren’t just about responsible public policy. They also make good business sense for commercial owners and brokers. A 2011 paper co-sponsored by Smart Growth America and the University of Utah noted that commercial property values in Washington, D.C., increased by $2.30 per square foot with each 1,000 foot reduction in distance to a rail line.

Whether it’s a transit-oriented development (TOD) rental and retail development or a greenways bike path for commuters, smart growth initiatives can benefit any community and increase both residential and commercial property values. To help REALTORS® take a more prominent role in local land use and smart growth issues, NAR has created Smart Growth Action Grants.

The three levels of cash grants can be used to support different types of smart growth efforts: courses or speakers on smart growth, seed funding to help associations engage other stakeholders about smart growth issues, and ongoing support for in-depth or sustained projects such as a charrette.

Full program guidelines and an application are available under the smart growth tab in the Government Affairs section of nar.realtor at www.nar.realtor/government_affairs/smart_growth/grants. 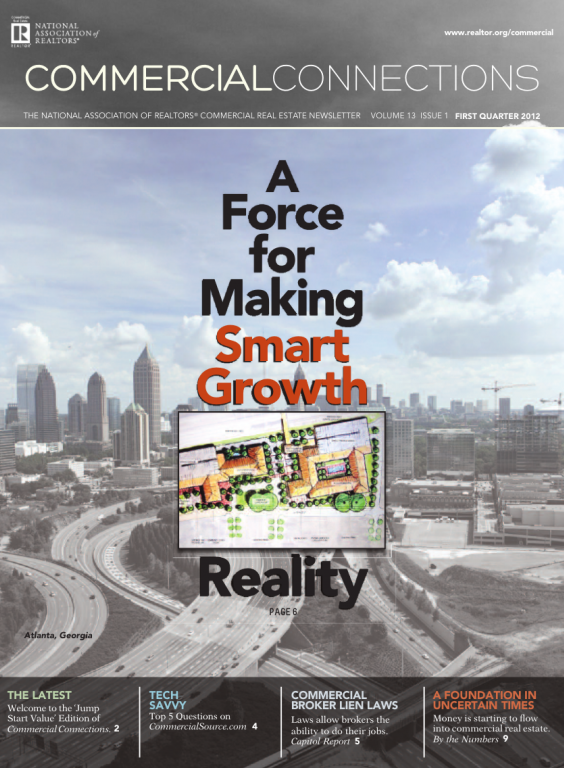