The results of REALTOR® AE magazine’s December nondues revenue survey indicate that making money to fund association operations, programs, and events is increasingly important. Not only did most respondents say generating revenue is a priority at their REALTOR® association, but comments indicate that efforts to find more revenue streams are growing. Several survey respondents said decreasing income from education offerings, both CE and non-CE, is prompting a fresh look at generating revenue from other sources and from outside the REALTOR® organization.

How important is generating nondues revenue?

What percentage of operating budget comes from nondues revenue?

The largest percentage of respondents report nondues revenue makes up 6% to 10% of their annual budget.

Survey participants were asked to select which of these 17 nondues revenue-generating programs they participate in and write in any programs not listed.  Most respondents (93%) generate nondues revenue with affiliate member dues. Write-in programs included a local real estate buyers guide for consumers, a group email service, a mortgage-rate catalog that lenders pay to participate in, lockbox programs, late fees, investment income, and MLS violation fines. 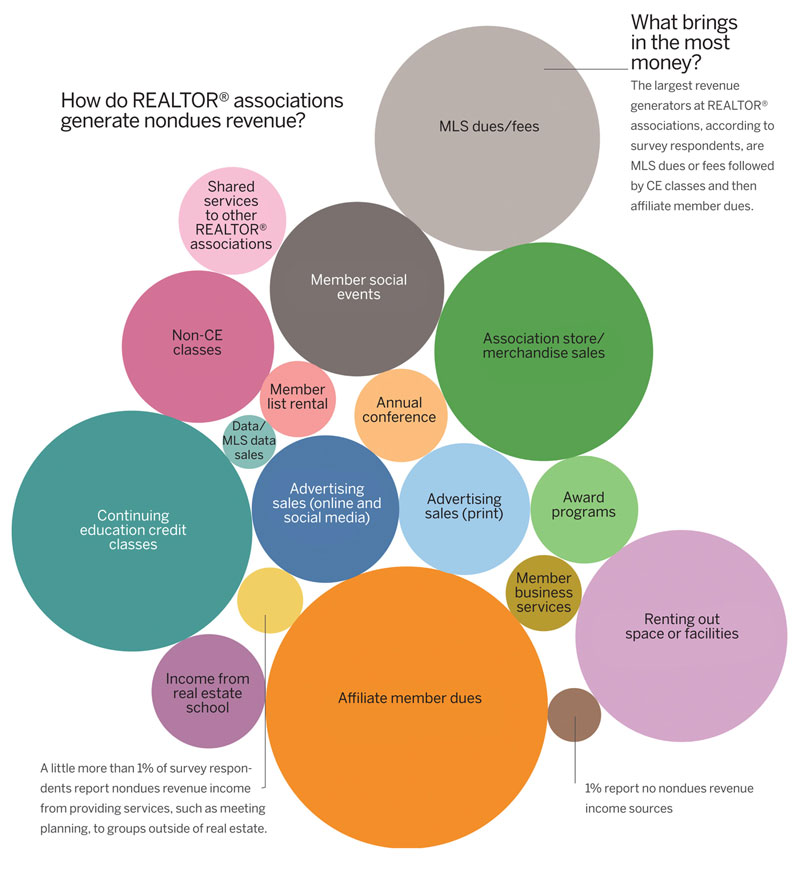 What brings in the most money?

The largest revenue generators at REALTOR® associations, according to survey respondents, are MLS dues or fees followed by CE classes and then affiliate member dues. 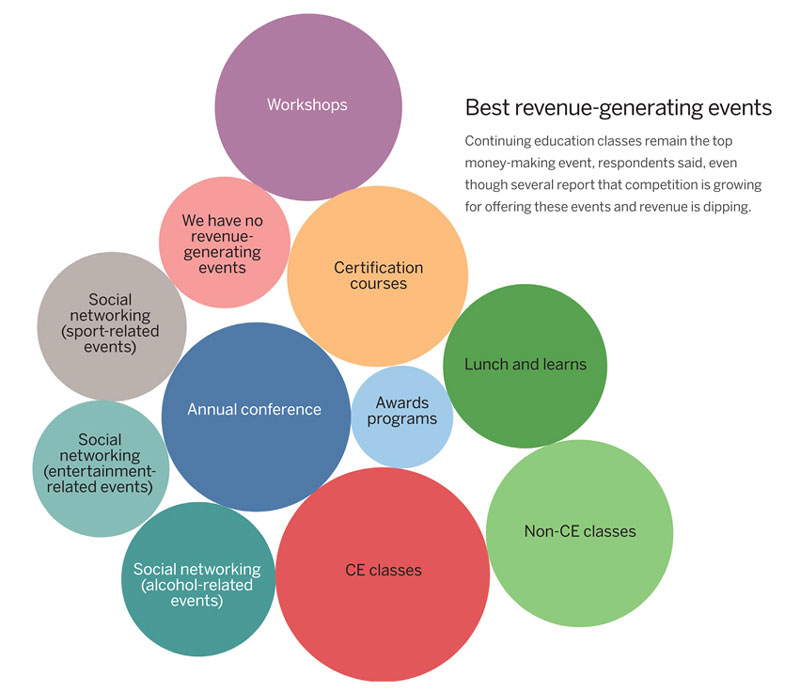 Continuing education classes remain the top money-making event, respondents said, even though several report that competition is growing for offering these events and revenue is dipping.

What members say they would pay for

Most respondents (43%) say they have never surveyed members about what types of products, events, or services they would pay for. Nearly the same number (40%) have asked members, and the most common response was that members wanted more free classes and events. One respondent wrote: “Leadership at our association has always felt that members should get significantly more for their dues than is possible to give them.” Other respondents said their member surveys showed REALTORS® would be willing to pay for shorter and higher-quality CE classes, more networking events, and technology classes.

Less than 2% of respondents said they provided services to consumers for a fee, such as homeowner fairs or home improvement classes.

Where ideas come from

76% of respondents said they involve their Board of Directors in generating ideas for new nondues revenue programs or projects.

Notice: The information on this page may not be current. The archive is a collection of content previously published on one or more NAR web properties. Archive pages are not updated and may no longer be accurate. Users must independently verify the accuracy and currency of the information found here. The National Association of REALTORS® disclaims all liability for any loss or injury resulting from the use of the information or data found on this page.
Search REALTOR® AE Magazine
Advertisement